Toronto, ON, Sep 17, 2019 — The Liberals (35%) and Conservatives (35%) are in a dead heat as the election officially gets underway, suggesting the events of the campaign will determine the outcome of the election, according to a new Ipsos poll conducted on behalf of Global News. While the underlying public assessment of the incumbent Liberals has improved over the last month, suggesting that voters have already factored in the SNC-Lavalin affair, the Conservatives continue to benefit from the most motivated voter base.

If the election were held tomorrow, 35% (up 2 points) of decided voters would vote for the Liberal Party, led by Prime Minister Justin Trudeau, while 35% (unchanged) of decided voters would vote for the Conservative Party led by Andrew Scheer. Jagmeet Singh and the NDP continue to struggle at just 14% of the popular vote (down 4 points), while Elizabeth May’s Green Party at 9% (unchanged) is solidly in fourth place. Maxime Bernier and the People’s Party would receive 2% of the vote (up 1 point), while 1% would vote for some other party (unchanged). The Bloc would receive 4% of the vote nationally (20% in Quebec), up 1 point. Two in ten Canadians either don’t know who they would vote for (10%) or would not vote (7%).

The large sample size of over n = 2500 Canadians gives the opportunity to analyze the vote according to many different demographic voting groups. The chart below, highlights some of those results. 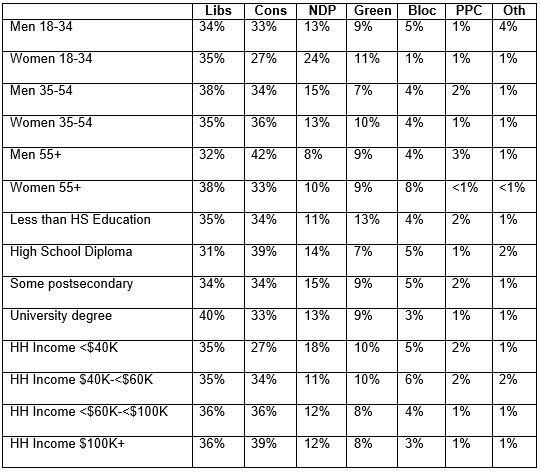 Three in ten (27%) Canadians say that they are voting for a different party than the one they supported in 2015. This includes 51% of Green Party voters, 38% of Bloc voters in Quebec, 29% of NDP voters, 29% of Conservative voters, and just 14% of Liberal voters.

Over the past month, some of the underlying fundamentals closely tied to an incumbent’s chances of re-election have improved, suggesting the electorate is moving beyond the SNC-Lavalin affair, which hurt Liberal approval ratings. More than four in ten (44%) Canadians now approve (9% strongly/35% somewhat) of the performance of the Liberal government under Justin Trudeau, up 8 points since last month. Conversely, 56% disapprove (32% strongly/23% somewhat), down 8 points.

Four in ten (39%, up 6 points) Canadians are now believe the Trudeau government has done a good job and deserves re-election, while 60% believe it is time for another party to take over. 1% don’t know either way.

Canadians are split on whether things in Canada are going in the right direction (47%) or are off on the wrong track (53%). While 86% of Liberal voters think things are going well, this drops to 49% of Green voters, 39% of Bloc voters, 38% of NDP voters, and just 18% of Conservative and PPC voters.

In Early Stages of Campaign, Conservatives Poised for Ballot-Box Bonus

Conservative voters are both most likely to say they will vote in the upcoming election, and are the most committed to their vote choice.

Among those who said they were voting for a particular party, 50% say they’re absolutely certain of their vote choice, meaning that 50% of declared voters could still potentially be swayed. Once again, Conservative voters are most committed, with 62% saying they are absolutely certain of their vote choice, well ahead of those voting for the Liberals (47%), Bloc (47%), NDP (39%) PPC (39%) or Green Party (31%) supporters, a majority of whom are less than fully committed to their choice.

Moreover, Ipsos has identified three important attitudes which drive one’s propensity to vote, all of which point to an advantage for the Tories.

Given the importance of Quebec in helping to determine the outcome of the election (roughly ¼ of parliament’s seats are in Quebec), La Presse and Global News teamed up to conduct an oversample of Quebec voters, giving Ipsos a sample of n = 1004 Quebecers to analyze.

Province-wide, the Liberals (41%) are in the driver’s seat, with a significant popular-vote advantage over the Conservatives (22%), the Bloc (20%), NDP (8%) Green Party (7%), People’s Party (1%) or some other party (1%). Two in ten Quebecers either don’t know (15%) who they would vote for or would not vote (7%). Given the NDP’s sagging fortunes in Quebec, the largest prize that the other parties will be fighting over are the 15 NDP-held seats, many of which could change hands.

The national trend showing a motivated Conservative base is also reflected in Quebec. Conservative voters are the most likely to be absolutely certain that they will vote (80%), ahead of the Bloc (74%), Liberals (71%), NDP (59%) and Green party voters (58%).

However, when it comes to vote certainty, Quebecers are slightly less certain of their vote choice than other Canadians, with only 46% saying they are absolutely certain, and no party holds a significant advantage: 51% of Conservatives, 50% of Liberals and 47% of Bloc voters are sure of their choice, while only 28% of NDP and 24% of Green voters say the same.

Reflecting on the fundamentals of the incumbent Trudeau Liberals, they are very strong in Quebec, which explains their large lead in most subregions of Quebec:

These are some of the findings of an Ipsos poll conducted between September 11 and 13, on behalf of Global News and La Presse. For this survey, a sample of n = 2562 Canadians aged 18+ was interviewed. A sample of n = 2062 was interviewed online, via the Ipsos I-Say panel and non-panel sources, and respondents earn a nominal incentive for their participation. A sample of n = 500 Canadians aged 18+ was interviewed by live-interview telephone interviewers by landline and cellphone, using random-digit dialing. Quotas and weighting were employed to balance demographics to ensure that the sample's composition reflects that of the adult population according to Census data and to provide results intended to approximate the sample universe (weighting efficiency = 62.9%). The precision of Ipsos polls which include non-probability sampling is measured using a credibility interval. In this case, the poll is accurate to within ± 2.2 percentage points, 19 times out of 20, had all Canadians been polled. The credibility interval will be wider among subsets of the population. All sample surveys and polls may be subject to other sources of error, including, but not limited to coverage error, and measurement error. Ipsos abides by the disclosure standards established by the CRIC, found here: https://canadianresearchinsightscouncil.ca/standards/