Toronto, ON, June 28, 2021 — Ipsos’ LGBT+ Pride 2021 Global Survey has just been released, with results worldwide pointing to a wide generation gap around gender identity and sexual attraction. On average, across the 27 countries surveyed, those who identify as transgender, non-binary, non-conforming, gender-fluid, or other than male or female make up 4% of Gen Z (born since 1997) compared to 1% among all adults. Younger adults are also significantly more likely to identify differently from heterosexual and to say they are equally attracted to both sexes.

In Canada, 2% of adults identify as transgender, non-binary, non-conforming, gender-fluid, or other than male or female. 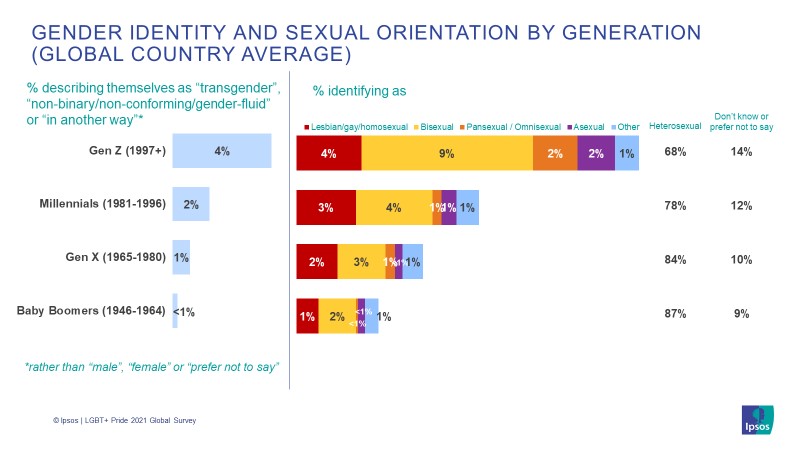 The survey, conducted on Ipsos’s Global Advisor online platform among nearly 20,000 individuals aged 16 to 74 between April 23 and May 7, 2021, shows how much exposure to LGBT+ people and engagement with the LGBT+ community varies across the world. The data reveal large variation across the globe when it comes to knowingly having a close contact who identifies as LGBT+. For instance, 66% in Brazil report having a gay or lesbian relative, friend or colleague vs. 7% in Japan and South Korea. As for Canadians, 60% say they have a gay or lesbian relative, friend, or colleague.

Similarly, anti-discrimination laws and equal marriage and adoption rights for LGBT people are supported by majorities in most of the 27 countries, but are fiercely opposed in several countries. With same-sex marriages being legal in Ontario and British Columbia starting from 2003 and subsequent passing of the Civil Marriage Act in 2005, it is not surprising that three-quarters (75%) of Canadians believe that same-sex couples should be allowed to marry legally, a 12-point increase from 2013. 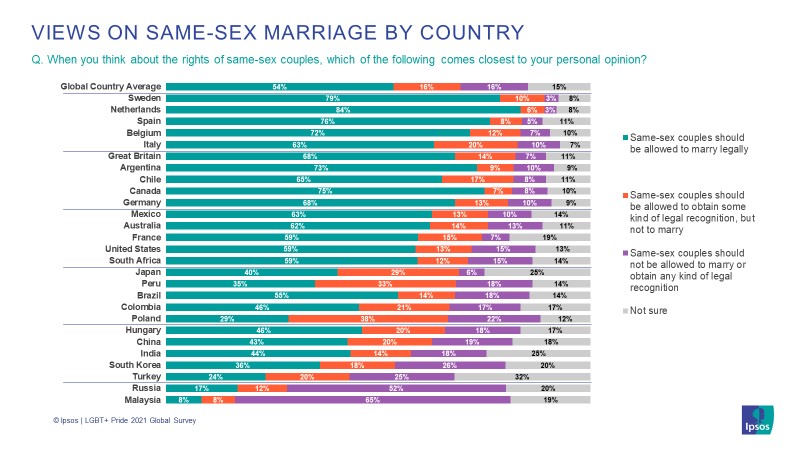 The survey also finds a lot more support than opposition toward corporate activism promoting equality. Majorities in most – but not all – countries support LGBT people being open about their sexual orientation or gender identity with everyone. And there is generally more support than opposition toward LGBT people displaying affection in public and more LGBT characters on TV, in films and in advertising.

With the 2021 Tokyo Olympics on the horizon, the survey has also found that here is a great deal of support in most countries for lesbian, gay and bisexual athletes being open about their orientation. On the other hand, when it comes to allowing transgender athletes to perform according to the gender they identify, public opinion is divided and varies widely across countries.

In Canada, six in ten (61%) say they support openly lesbian, gay, and bisexual athletes in sports teams (vs. 50% worldwide), but only a third (33%) saying that they support transgender athletes competing based on the gender they identify with, rather than the sex they were assigned at birth (compared to 32% worldwide). 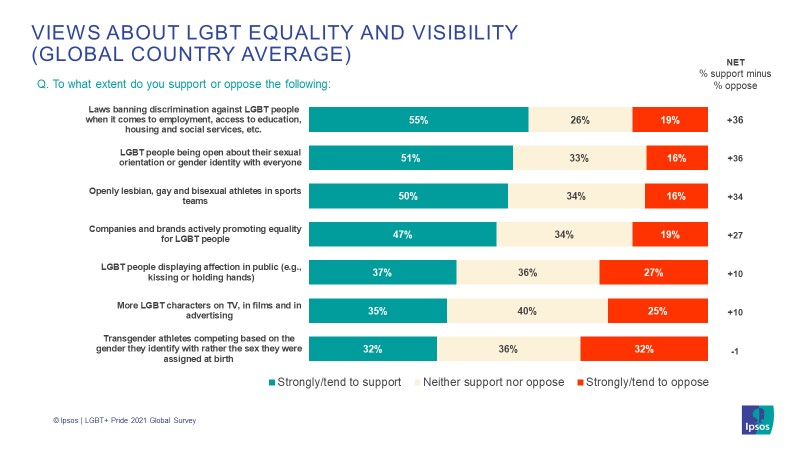 These are the results of a 27-market survey conducted by Ipsos on its Global Advisor online platform. Ipsos interviewed a total of 19,069 adults aged 18-74 in Canada, Malaysia, South Africa, Turkey and the United States, and 16-74 in 23 other markets between April 23 and May 7, 2021.

The samples in Brazil, Chile, China (mainland), Colombia, India, Malaysia, Mexico, Peru, Russia, South Africa and Turkey are more urban, more educated, and/or more affluent than the general population. The survey results for these countries should be viewed as reflecting the views of the more “connected” segment of their population.

Where results do not sum to 100 or the ‘difference’ appears to be +/-1 more/less than the actual, this may be due to rounding, multiple responses or the exclusion of don't know or not stated responses.