Toronto, ON, March 24, 2022 – As citizens around the world were weathering the pandemic, the accompanying economic and mental health struggles have been postulated to have led to an inward-looking perspective. Ipsos’ tracking of sense of Social Cohesion (part of Ipsos Context Advantage Knowledge Suite) across 28 countries has shown that societies have been becoming less cohesive over the past couple of years.

Specifically in Canada, trends in social cohesion have been worrisome. As an example of this decline, the proportion of Canadians who would trust in other Canadians to do what is in the best interest of the country has dropped from 72% in late 2020 to 61% today. Similarly, the belief that “I have the same outlook on life/priority issues as other Canadians” has dropped from 73% to 67%, while trust in government to do what is right has dropped from 58% to 43%, now standing at only one in four. These trends all point to the questions in citizens' minds on their level of interdependence and reliance on each other and their institutions.

Further evidence of an erosion in Social Cohesion is found in findings from our recent 30 country study which probed interpersonal trust, a key measure of social capital.

A new Ipsos survey finds that, on average across 30 countries, only 30% of adults say most people can be trusted against 70% who believe that you can’t be too careful dealing with people. Among these countries, interpersonal trust is highest in China and India, where 56% say most people can be trusted, and lowest in Brazil, Malaysia, and Turkey, where fewer than 15% say so.

The survey was conducted among 22,534 adults under the age of 75 conducted between February 18 and March 4 on Ipsos’s Global Advisor online survey platform.

In Canada, only 33% of citizens believe that most people can be trusted, against 67% who believe that you can’t be too careful dealing with people, placing Canadians in the middle of the spectrum when compared to 29 other countries.

Interpersonal trust is uniformly low across Latin America and closer to the global average in North America. Levels vary widely across countries within other regions: In Europe, from 48% in the Netherlands to only 16% in Poland; and in the Asia-Pacific region, from 56% in China and India to 13% in Malaysia. 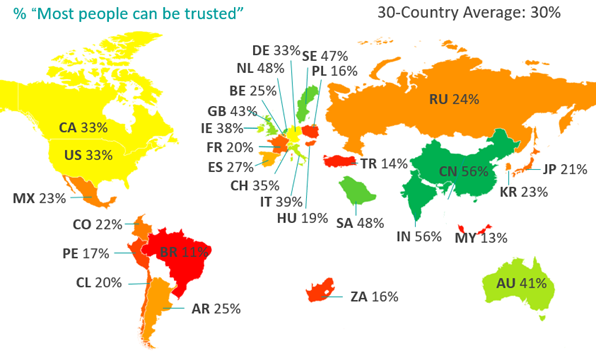 The Demographics of Social Trust

In Canada, while men and women hold similar views about trusting others, significant differences exist between generational views or by other characteristics such as income and education. Older Canadians, higher-income Canadians and higher education Canadians are more trusting, in comparison to those in middle age groups, or with a lower income and or education.

This is in line with the global trends observed, where the propensity to trust others is greater among those who are business decision-makers, holders of a higher education degree, married, older, male, and affluent. 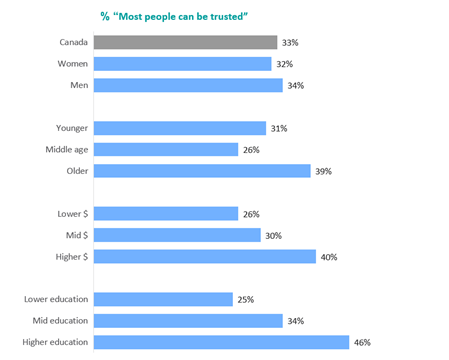 The differences in opinions of various demographic sub-groups yet again underline the contrasting experiences among members of society.

While a more cohesive society is associated with a more stable economy, low social cohesion can be linked to the potential for disruption and often, the fragility of societal structures. Furthermore, given the high correlation[1] observed not only between interpersonal trust and happiness but also between interpersonal trust and consumer confidence, the current low level of trust among citizens points to an increased challenge for the government as well as businesses serving these populations.

Governance is more demanding when confronted with the task of governing populations that are significantly fragmented. Companies (and the economy more broadly) are challenged in their marketing, sales, etc. when consumers are divided into various socio-political camps.

The samples in Argentina, Australia, Belgium, Canada, France, Germany, Great Britain, Hungary, Italy, Japan, the Netherlands, Poland, South Korea, Spain, Sweden, Switzerland, and the United States can be taken as representative of these countries’ general adult population under the age of 75.

The samples in Brazil, Chile, China (mainland), Colombia, India, Malaysia, Mexico, Peru, Russia, Saudi Arabia, Singapore, South Africa, and Turkey are more urban, more educated, and/or more affluent than the general population. The survey results for these markets should be viewed as reflecting the views of the more “connected” segment of their population.

The Global average reflects the average result of all the countries and markets where the survey was conducted that year. It has not been adjusted to the population size of each country or market and is not intended to suggest a total result.

[1] Based on a comparison of percentage saying most adults can be trusted in 23 countries with Ipsos’s Consumer Confidence Index for each of these countries—a composite metric indicative of consumers’ perceptions about their current and prospective financial situation, purchasing comfort, and economic, jobs, and investment environment. It was found that these metrics were highly correlated: R-squared of 0.76 and 0.54, respectively for relationship of interpersonal trust with Consumer Confidence and Happiness.