Toronto, ON - Three in ten (29%) Canadians say they have never created a budget for themselves or for their household, according to a new Ipsos poll conducted on behalf of Interac. While most (71%) have created a budget, two in ten (20%) say they last performed this task over a year ago, while others did it six months to one year ago (10%) or within the last six months (41%).

Among those who have habits they want to work on, not saving money (54%) and overspending/living beyond their means (36%) are the most common habits they feel need improvement. For others, not being able to adhere to a budget (28%), not paying the credit card bill in full each month (24%), not having a personal or household budget (22%), overusing their credit cards (21%), or accumulating debt such as loans (15%) is the bad habit they're looking to kick. One in ten (11%) have some other financial habit they'd like to work on. Interestingly, men (28%) are more likely than women (15%) to say they need to work on overusing their credit cards, while women (60%) are more likely than men (48%) to say they need to work on not saving money.

When Canadians were asked which of their financial habits causes them stress, not saving money came away as the clear winner, with four in ten (43%) Canadians, overall, saying this causes them stress, including 54% of young adults. Decidedly in second-place is overspending or living beyond their means, with one quarter (25%) of all Canadians saying this causes them stress - once again disproportionately higher among young adults (37%). Other habits that cause Canadians stress include: not adhering to a budget (17%), accumulating debt such as loans (17%), not paying their credit card bill in full every month (16%), overusing their credit cards (15%), not having a personal or household budget (11%), differing financial views in the household (10%), or some other financial habit (19%).

Most Canadians Have Financial Goals, But Three in Ten (27%) Feel They're Off Track... 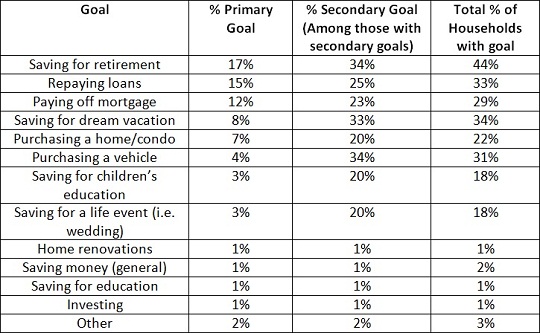 Canadians appear to be more on the ball when it comes to achieving their goals: two in three (66%) with goals say that they have reviewed their financial goals within the last six months. However, three in ten (27%) feel that they are not on track to achieve their goals. While most (73%) feel their on the right track, 34% believe they need to make some adjustments to be on track.

These are some of the findings of an Ipsos poll conducted between August 25 and 28, 2015 on behalf of Interac. For this survey, a sample of 1,004 adults from Ipsos' Canadian online panel was interviewed online. Weighting was then employed to balance demographics to ensure that the sample's composition reflects that of the adult population according to Census data and to provide results intended to approximate the sample universe. The precision of Ipsos online polls is measured using a credibility interval. In this case, the poll is accurate to within +/ - 3.5 percentage points, 19 times out of 20, had all Canadian adults been polled. The credibility interval will be wider among subsets of the population. All sample surveys and polls may be subject to other sources of error, including, but not limited to coverage error, and measurement error.

About Ipsos in Canada

Ipsos is Canada's market intelligence leader, the country's leading provider of public opinion research, and research partner for loyalty and forecasting and modelling insights. With operations in eight cities, Ipsos employs more than 600 research professionals and support staff in Canada. The company has the biggest network of telephone call centres in the country, as well as the largest pre-recruited household and online panels. Ipsos' marketing research and public affairs practices offer the premier suite of research vehicles in Canada, all of which provide clients with actionable and relevant information. Staffed with seasoned research consultants with extensive industry-specific backgrounds, Ipsos offers syndicated information or custom solutions across key sectors of the Canadian economy, including consumer packaged goods, financial services, automotive, retail, and technology & telecommunications. Ipsos is an Ipsos company, a leading global survey-based market research group.

Visit www.ipsos.com to learn more about Ipsos' offerings and capabilities.