Commenting on the findings, Amit Adarkar, CEO, Ipsos India, said, “Abortion in India is still a criminal offence under the Indian Penal Code (IPC). But the Medical Termination of Pregnancy (MTP) Act of 1971 which was further amended in January 2020, allows women to abort under certain circumstances. It empowers women about their rights. The survey too endorses these rights of women. Though 1 in 4 urban Indians oppose it. It’s not that they do not want these rights, but it is more to avoid misuse for female infanticide.”

Interestingly, at least 7 in 10 global citizens favour legalization of Abortion.
The global survey shows some countries have highly favourable views towards abortion, as it gives women the right to choose, whether to keep the baby or not.

The countries with most progressive views on abortion were Sweden (88%), Belgium (84%), France (84%), Great Britain (83%), Spain (83%) and Netherlands; and the nations with most conservative abortion views were Malaysia (24%) and Peru (48%).
Women’s right to have an abortion is most widely accepted in Europe, with 80% saying it should be permitted. Sweden tops the ranking with an 88% acceptance rate, followed by Belgium (87%), France (84%), and Great Britain, the Netherlands, and Spain (83% in all three countries). Outside of Europe, abortion is most widely accepted in South Korea (79%), Australia (78%) and Canada (77%).
Latin America shows lower acceptance rates with 62% of adults surveyed across the region saying abortion should be permitted. Only 26% of respondents across five Latin American countries agree a woman may have an abortion whenever she wants, while 36% accept that it may happen under certain circumstances, such as rape. Overall acceptance of abortion in the region ranges from just 48% in Peru and 53% in Brazil to 72% in Argentina – the only Latin American country surveyed where acceptance is above the global average.

Among all 25 countries in the survey, Malaysia is the one where abortion is least accepted. Only 24% of Malaysians polled say it should be permitted either whenever a woman wants it or in certain circumstances such as a rape.
Total % SHOULD be permitted 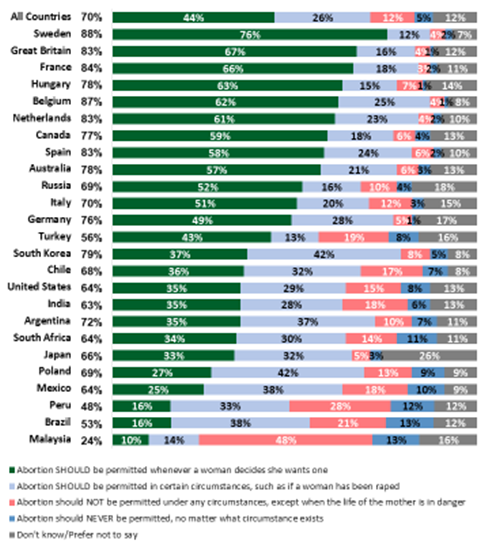 Malaysia shows the largest proportion of survey respondents saying abortion “should not be permitted, except when the life of the mother is in danger” (48% vs. a global average of 12%).

About the Study
These are the results of a survey conducted by Ipsos on the Global Advisor platform. Ipsos interviewed a total of 17,997 adults aged 18-74 in United States, Canada, Malaysia, South Africa, and Turkey, and 16-74 in 20 other countries on its Global Advisor online survey platform, between May 22 and June 5, 2020.
The sample consists of approximately 1,000 individuals in each of Australia, Brazil, Canada, France, Germany, Great Britain, Italy, Japan, Spain, and the U.S., and 500 individuals in each of Argentina, Belgium, Chile, Hungary, India, Malaysia, Mexico, the Netherlands, Peru, Poland, Russia,  South Africa, South Korea, Sweden, and Turkey.
The samples in Argentina, Australia, Belgium, Canada, France, Germany, Great Britain, Hungary, Italy, Japan, the Netherlands, Poland, South Korea, Spain, Sweden, and the U.S. can be taken as representative of these countries’ general adult population under the age of 75. The samples in Brazil, Chile, India, Malaysia, Mexico, Peru, Russia, South Africa and Turkey are more urban, more educated, and/or more affluent than the general population. The survey results for these countries should be viewed as reflecting the views of the more “connected” segment of these population.
The data is weighted so that each country’s sample composition best reflects the demographic profile of the adult population according to the most recent census data.
The report shows results of previous survey waves conducted each year from 2014 to 2019 in most of the countries covered in 2020. In previous survey waves, the same question was asked on the same Global Advisor platform of sample of similar sizes in all countries. However, until 2018, the maximum age of adults surveyed in all countries was 64. In 2019, the age range in all countries was extended up to 74. Therefore, 2020 results are only truly comparable to 2019 results. Tracking going back to 2014 is only indicative.
Where results do not sum to 100 or the ‘difference’ appears to be +/-1 more/less than the actual, this may be due to rounding, multiple responses or the exclusion of don't knows or not stated responses.
The precision of Ipsos online polls are calculated using a credibility interval with a poll of 1,000 accurate to +/- 3.5 percentage points and of 500 accurate to +/- 4.8 percentage points. For more information on the Ipsos use of credibility intervals, please visit the Ipsos website.