The Ipsos Global Inflation Monitor is a quarterly survey that explores how people around the world are coping with the changes of inflation and what they feel are the causes of rising prices. Singapore joins the survey for the first time in Oct-Nov 2022. These are the Singapore findings of the survey.

Click here to see the full global release and charts

Expectations for Spending in 2023

Among a variety of regular household expenses, Singaporeans expect to increase spend most on the cost of utilities such as gas and electricity (79%), next on non-food household shopping (78%), and on cost of food shopping (77%).

64% of Singaporeans expect to increase overall spend on socialising and entertainment, and 48% say the same on the cost of their subscriptions such as Netflix and gym memberships.

With the expectation of rising interest rates, 37% of Singaporeans expect to increase spend on their mortgage or rent. 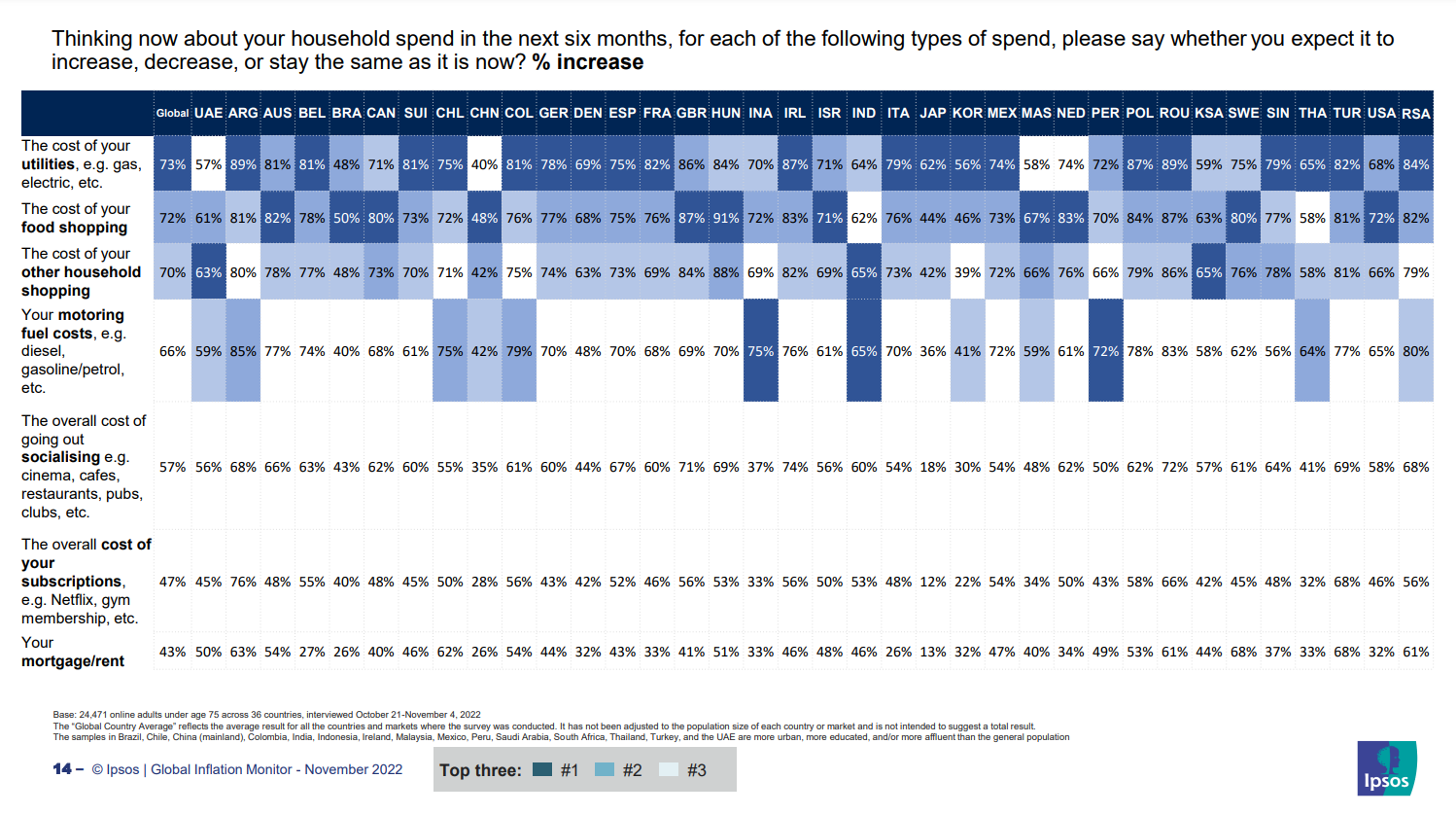 What do people think is driving inflation?

Inflation is perceived as being a global problem, with the state of the global economy (74% global / 81% Singapore) and the Russian invasion of Ukraine (70% global / 75% Singapore) as the primary causes of rising prices. However, local factors are playing their part too, in Singapore, eight in ten say interest rates (78%) and the policies of the government (73%) are playing their role.

77% of Singaporeans also think the Covid-19 pandemic is contributing to the rising cost of living. A lower but still significant proportion of Singaporeans blame businesses making excessive profits (63%), workers demanding pay increases (61%) and immigration into the country (60%). 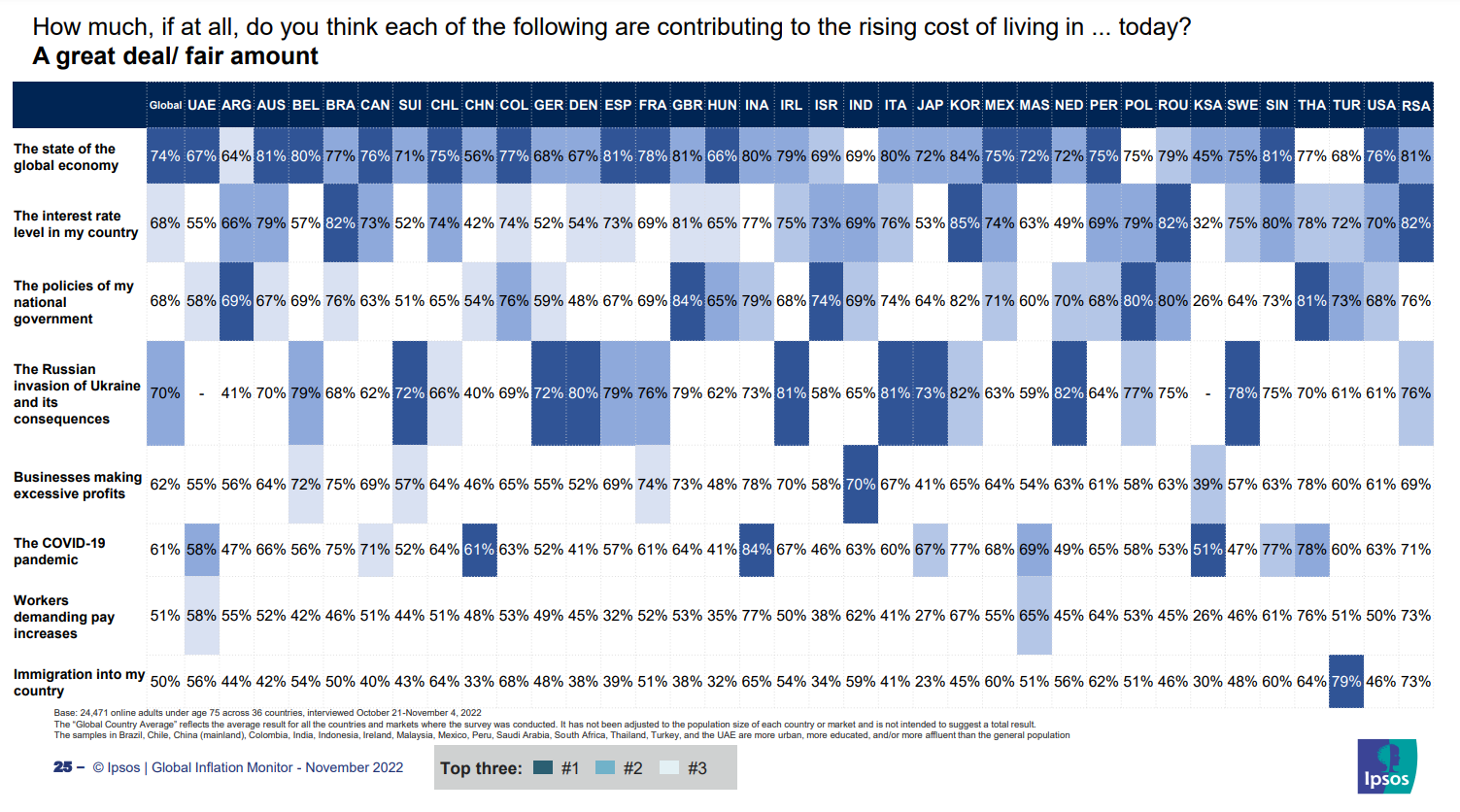 Expectations around Employment in 2023

60% of Singaporeans think unemployment will grow in the country in the next 12 months. And 40% are expecting their disposable income to fall in 2023. Only 8% are expecting an at or above inflation pay rise.

40% say they are unlikely to look for a new job with a different employer, but some 48% say they would be looking to shift employment in 2023. 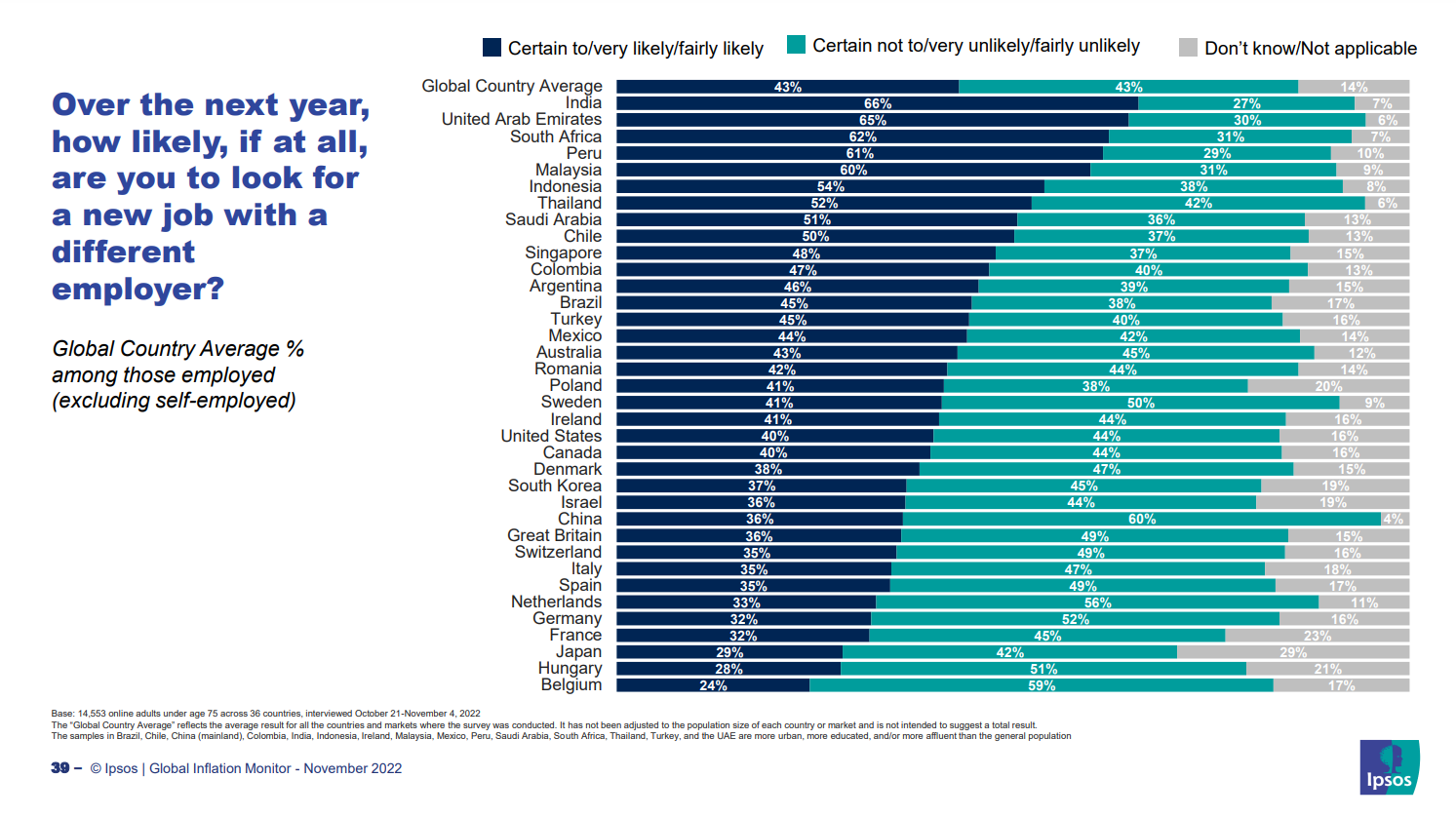 These are the findings of a 36-country survey conducted by Ipsos on its Global Advisor online platform conducted between 21 October and 4 November 2022. Ipsos interviewed a total of 24,471 adults aged 18-74 in the United States, Canada, Republic of Ireland, Israel, Malaysia, South Africa, and Turkey, 20-74 in Thailand, 21-74 in Indonesia and Singapore, and 16-74 in 26 other markets.

The “Global Country Average” reflects the average result for all the countries and markets where the survey was conducted. It has not been adjusted to the population size of each country or market and is not intended to suggest a total result.