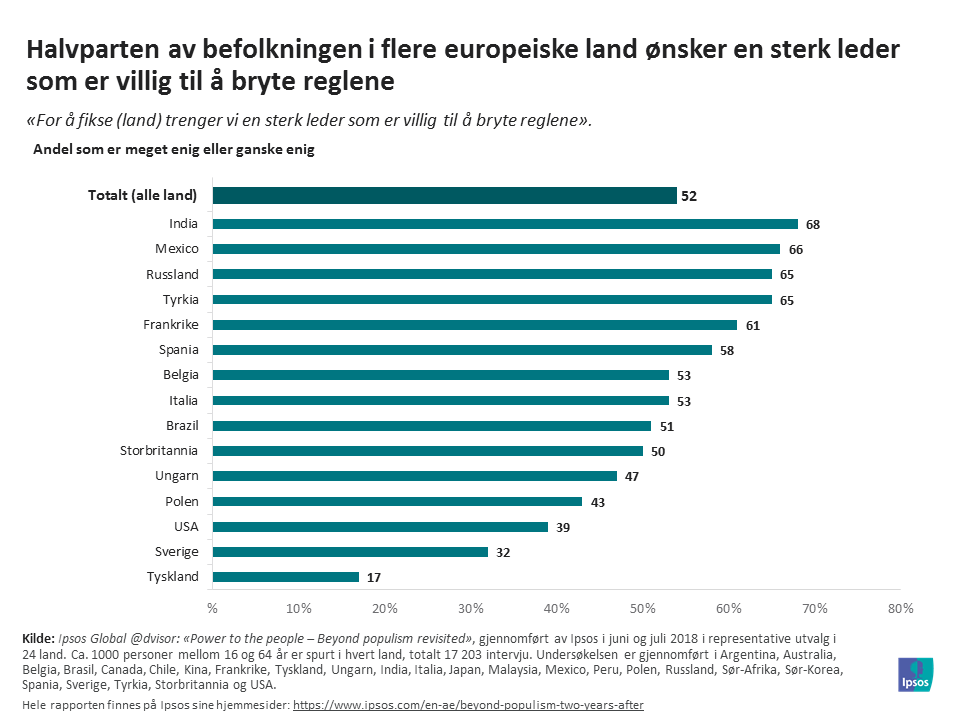 It paints a picture where fewer people think their country is decline than in 2016, but many still believe the system is rigged against them, leaving them alienated from the traditional system of politics, with a majority looking for a strong leader willing to break the rules.

In 2016, a majority of people in 15 of the 24 countries thought their country was in decline, but this is now down to just six. The biggest change has happened in South Korea, where three in four (73%) previously thought their country was in decline, during a political scandal which ended with presidential impeachment – now only a third (31%) still think so. Other notable swings towards optimism have happened in Belgium, Italy, Spain, France, Mexico, and in Germany, where the sense of decline has nearly halved from 47% in 2016 to 25%, meaning that the Germans now join Canada and Chile as among the most optimistic nations. Indians have become more pessimistic (from 22% to 31%), but overall are still more positive that most.

Is the system broken?

Nevertheless, there remains a strong sentiment that the people in charge do not care about the average person, and instead favour the rich and powerful, although slightly less than two years ago.

Two in three on average (63%) believe their country’s economy is rigged to advantage the rich and powerful, which is down from 69% in 2016. It is particularly high in Russia and Hungary, and has risen in South Africa over the past two years. Italy, however, has seen this anti-system feeling decline, going from three-quarters (75%) in 2016 to now nearer half (56%), leaving only Malaysia and Sweden lower than them.

A majority of people across 23 countries feel that their traditional parties and politicians do not care about them, with an average of three in five (59%), compared to two-thirds (64%) in 2016. Again, this has increased most in South Africa, growing from 65% two years ago to 70% now, being beaten only by Mexico. Following trend, anti-system sentiment continues to fall in Italy, with now just half (51%) feeling alienated from traditional parties (compared to 72% in 2016), and it is also lower than average in Germany, Sweden and Japan.

On average, just over half (52%) believe they need a strong leader who is willing to break the rules, a marginal change since 2016 (49%). However, there are big variations on this, with the biggest increases occurring in Argentina, Mexico, Spain and Peru, meaning they join Peru and India among the nations most enthusiastic for populist-style leadership.

There have also been swings against anti-establishment leaders, particularly in France, the highest scoring nation in 2016 (80%), which has now dropped to three in five (61%), with falls also happening in Poland and Italy. While Sweden is growing less opposed to populist leadership (from 23% to 32%), they stick with Germany as among the least keen overall.

Support for established parties is weak, with just one in five (21%) saying that countries should stick with political parties and leaders who have been in power before. The French, Italians and Polish are those feeling most alienated by the present establishment.

On the other hand, for two in five (39%) there is a recognised risk in electing parties with radical plans who have not been in power before. Among the most hesitant are Peru, Brazil and Russia, while Italy, Sweden and Great Britain are more willing to embrace untested parties.

Eight in ten (79%) lack confidence in political parties (and a majority in every country), practically unchanged since 2016, and two in three (66%) lack confidence in their government. In both instances confidence is particularly low in Spain and across Latin America. Whereas, perception of government has improved most drastically in South Korea and Italy.

Two in three (65%) lack confidence in the media, relatively unchanged over two years, and still highest in Hungary, where it rises to over eight in ten (85%). Ambivalence towards the media has increased in Turkey and India, while decreasing in Germany.

Just under half (47%) say they lack confidence in international institutions, slightly improving from 2016 when it was 52%. Those lacking confidence have decreased in Spain over two years, going from 77% to now 65%, although it remains among the least positive nations, along with Italy and many other European countries.

Over half say they lack confidence in banks (52%) and big companies (56%), both only a slight improvement from 2016. India, Saudi Arabia and Malaysia are among the more positive in both cases, while Spain and Italy have the least confidence in their banks.

Lack of confidence in the justice system has undergone a small change, down to 56% from 59%. Perceptions have improved in Hungary, Mexico and Brazil, but still remains uncertain in countries across Latin America, reaching up to four in five (81%) in Peru.

Exclusionism versus opening up to the world?

On balance, people are split on whether their country should protect itself or open up more to world (31% vs 35% on average), while one in three are still unsure, reflecting a similar pattern from 2016. Those most keen to protect themselves include Australia, the United States and Canada, while Mexico and Peru think they need to open up.

The urge to open up to the world has increased in Brazil and France, but has decreased in Spain and Sweden.

American sentiment that the United States needs to take more steps to protect itself from today’s world has decreased, down from around half (47%) in 2016 to 37%.

In total 17, 203 interviews were conducted between June 26 – July 9 2018 among adults aged 18-64 in the US and Canada, and adults aged 16-64 in all other countries. The survey was conducted in 25 countries around the world via the Ipsos Online Panel system (Argentina, Australia, Belgium, Brazil, Canada, Chile, France, Germany, Great Britain, Hungary, India, Italy, Japan, Malaysia, Mexico, Peru, Poland, Saudi Arabia, South Africa, South Korea, Russia, Spain, Sweden, Turkey and the United States of America).

Between 500 and 1000+ individuals participated on a country by country basis via the Ipsos Online Panel. The sample was 1000+ in Australia, Brazil, Canada, France, Germany, Great Britain, Italy, Japan, Spain and the United Stated of America. In all other countries, the sample was 500+.