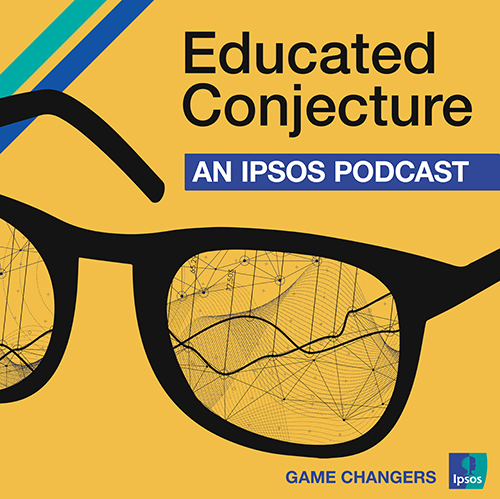 Welcome to Educated Conjecture – an Ipsos podcast that combines what the public thinks, with what the experts think. In each episode, Ipsos’ Mike Colledge and Sean Simpson and an informed guest will examine a current or emerging issue. They discuss what is happening today, think ahead about the future impact (both good and bad) and reflect on what steps might need to be taken to generate a better outcome for tomorrow. This podcast series is ideal for everyone: government, businesses, non-profits, agencies, brand marketers, consumer researchers, product innovators, and you. Listen in now!

Season 1, Episode 8 – In this episode, we are joined by Mike Morrice, Ontario's first-ever elected Green MP, to discuss the role of government in combatting climate change.  A  majority of Canadians say they’re doing what they can to combat climate change, but they don’t believe the same is true for governments and businesses.  With Canadians no longer believing that growing the economy and addressing climate change are mutually exclusive, what policies could be adopted to reduce emissions, and what trade-offs might need to be made?

Season 1, Episode 7 – In this episode we are joined by Kendra Jones, Director at Ipsos (and also in theatres around the world!) to discuss the impact of the pandemic on theatre companies. Will live theatre will see a return to its traditions, or will it be reshaped in a post-pandemic world?

Season 1, Episode 6 – In this episode, we are joined by Kevin Crigger, President, Toronto Regional Real Estate Board (TRREB) and Broker & Team Leader with Johnston & Daniel/Royal LePage. COVID and WFH has resulted in many Torontonians re-evaluating their housing choices both in and outside the GTA. We discuss the impact of the pandemic on renting and buying, which groups have been the most mobile, and what new/improved policies could help remove barriers to housing affordability.

Season 1, Episode 5 – This week, as we race toward next week’s #elxn44, Darrell Bricker, Global CEO of Ipsos Public Affairs joins us to discuss the defining moments, issues, and the latest public opinion on all things election-related, including how political parties are positioning themselves to voters in the last week of the campaign, and if any party has a clear path to a majority government.

Season 1, Episode 4 - With the election coming up fast, Kyle Braid, SVP for Ipsos in Western Canada (and Winnipeg Jets super-fan!) joins us to discuss all things political – the issues, trends, and shifting party support – in BC and the west more generally.

Season 1, Episode 3 – It’s the week of August 23 (and the second week of Canada’s election campaign) so in this episode, Sébastien Dallaire, SVP/ Directeur-général for Ipsos in Québec joins us to discuss how the upcoming election will play out in Quebec, including wedge issues, the role of debates, and the impact of the BQ, as well as which political parties have the most to gain (and lose) in the province.

Season 1, Episode 2 – Today we are joined by Ray Kong, President at Ipsos and specialist in CX and Financial Services to talk about the opportunities and challenges of a K-shaped economic recovery.

Season 1, Episode 1 – In this the inaugural episode, Darrell Bricker, Global CEO of Ipsos Public Affairs joins us as we talk about citizen-consumer sentiment and optimism, the latest vote and issue polling results, and what to look for in the coming weeks as the Canadian election campaign kicks off.