Toronto, ON, May 6, 2022 – As candidates deliver their opening remarks to convince voters that they are the best person for the premier’s job on June 2nd, a new Ipsos poll conducted exclusively for Global News has found that four in ten Ontarians (41%) choose Doug Ford as the person who would make best premier of the province, followed by Andrea Horwath (32%) and Steven Del Duca (21%).

With recent polls showing Doug Ford’s Progressive Conservatives with a strong lead at the start of the official election period, 4 in 10 Ontarians (41%) think the incumbent would make the best Premier of Ontario, which is higher among men (47% vs. 36% for women) and older age groups (55+: 48%; 35-54: 42% vs. 18-34: 32%). Doug Ford is also running slightly ahead of his party with 41% preferring him as Premier compared to 39% who say they plan to vote for the Progressive Conservative Party.

Finally, one in five (21%) believe Steven Del Duca would make the best Premier. While his scores are lower than for the other two major party leaders among every demographic group studied, they are relatively higher among those aged 18-34 (25% vs. 35-54: 18%; 55+: 20%) and those with less than a high school diploma (31% vs. 24% with a degree; 17% among those with some postsecondary education; and 17% among those with only a high school diploma). Compared to the other major party leaders Mr. Del Duca represents a slight drag on his party’s electoral prospects. Twenty one percent prefer him as the next Ontario Premier while 26% are planning to vote for the Liberal Party.

Ford and Howarth are virtually tied in terms of favourability at 34% (10% very, 24% somewhat) and 33% (10% very, 23% somewhat), respectively. Following them, 18% of voters see Del Duca in a favourable light (3% very, 15% somewhat), while one in ten (10%) see Mike Schreiner favourably (2% very, 8% somewhat).  However, the premier is the most polarizing figure with four in ten (43%) seeing him in an unfavourable light, ahead of Horwath (29%), Del Duca (28%) and Schreiner (16%). In fact, Andrea Horwath is the only party leader who garners a net positive favourability score with Ontarians.

Strengths and weaknesses of leadership profiles

As candidates attempt to put their best foot forward while making their case for the premier’s job, Ford and Howarth’s leadership profiles have already formed strengths and weaknesses in voters’ minds while relative newcomer Del Duca’s is only starting to take shape:

Ontarians associate none of the leaders with many of the attributes tested - such as being trustworthy (43%), spending taxpayer’s money wisely (42%), making housing affordable (41%), providing an open, ethical and honest government (41%), or efficiently managing Ontario’s budget (40%) – meaning there are many opportunities for the party leaders to establish their credentials in these areas. 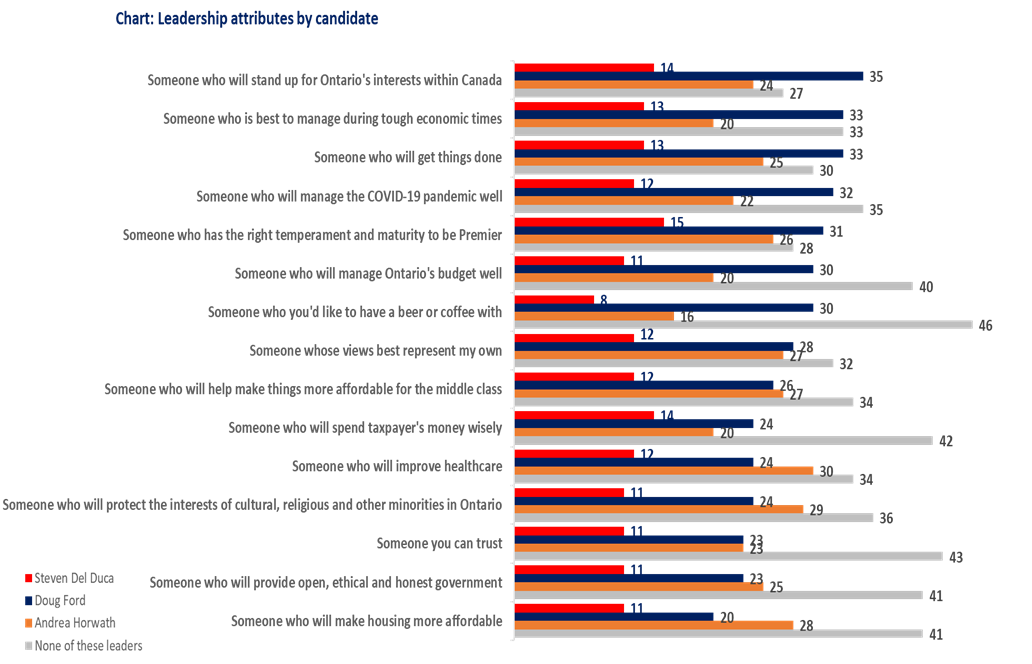 These are some of the findings of an Ipsos poll conducted between April 29 and May 1, 2022, on behalf of Global News.  For this survey, a sample of n = 1501 Ontarians aged 18+ was interviewed online (n = 1001 though the Ipsos I-Say panel and non panel sources) and by live-operator telephone interview (n = 500 through landline and cellphones) Online respondents earn a nominal incentive for their participation.  Quotas and weighting were employed to balance demographics to ensure that the sample's composition reflects that of the adult population according to Census data and to provide results intended to approximate the sample universe. The precision of Ipsos polls which include non-probability sampling is measured using a credibility interval. In this case, the poll is accurate to within ± 2.9 percentage points, 19 times out of 20, had all Ontarians been polled. The credibility interval will be wider among subsets of the population. All sample surveys and polls may be subject to other sources of error, including, but not limited to coverage error, and measurement error. Ipsos abides by the disclosure standards established by the CRIC, found here: https://canadianresearchinsightscouncil.ca/standards/