Toronto, ON - As Canada's birthday is celebrated from coast to coast, a new Ipsos Reid poll - the third in a series of polls examining Canadian values, icons and culture conducted on behalf of Global Television and Postmedia News - has revealed that Canadians believe their country's wilderness, flag, national anthem and hockey best reflect what Canada really is. Asked whether or not the following are good or poor reflections for what Canada really is, the following is how Canadians ranked these symbols and icons: 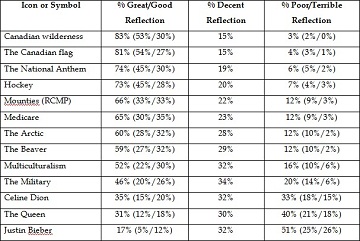 Respondents were also asked whether some of the things that might be used to describe Canada to someone from another country are among Canada's best attributes or its worst. Some symbols fared better than others:

In fact, that patriotism extends to being proud of Canada's independent culture, as most (66%) Canadians `disagree' (25% strongly/42% somewhat) that `when it comes to culture, Canada and the U.S. are basically the same', while one in three (34%) `agree' (6% strongly/28% somewhat) that it is.

One of the areas that has perhaps caused Canada's reputation to become tarnished in the eyes of some is its environmental record. Just four in ten (43%) `agree' (8% strongly/36% somewhat) that `Canada is doing enough to protect the environment', while most (57%) Canadians `disagree' (22% strongly/35% somewhat) that the country is doing enough on this front, led in particular by those aged 18 to 34 (63%).

The Threads that Bind Canada Together...

Canada is a large and diverse place, and many see this as a positive: three-quarters (73%) of Canadians `agree' (25% strongly/48% somewhat) that `multiculturalism in Canada is a good thing', while one-quarter (27%) `disagree' (9% strongly/18% somewhat) with this notion.

Perhaps reflecting the notion that most Canadians would put their country identity before their provincial identity, the data reveal that most Canadians say they have things in common with other Canadians, regardless of whether or not they belong to disparate demographic groups.

Regarding a generational divide, most (88%) Canadians believe that older Canadians and younger Canadians have things in common (20% a lot/67% a little), while few (12%) think that these two groups don't have anything in common, with no significant differences across age ranges.

These are some of the findings of an Ipsos Reid poll conducted between June 20-25, 2012, on behalf of Postmedia News and Global Television. For this survey, a sample of 1,101 Canadians from Ipsos' Canadian online panel was interviewed online. Weighting was then employed to balance demographics to ensure that the sample's composition reflects that of the adult population according to Census data and to provide results intended to approximate the sample universe. A survey with an unweighted probability sample of this size and a 100% response rate would have an estimated margin of error of +/- 3.0 percentage points, 19 times out of 20, of what the results would have been had the entire population of adults in Canada been polled. All sample surveys and polls may be subject to other sources of error, including, but not limited to coverage error, and measurement error.

Ipsos Reid is Canada's market intelligence leader, the country's leading provider of public opinion research, and research partner for loyalty and forecasting and modelling insights. With operations in eight cities, Ipsos Reid employs more than 600 research professionals and support staff in Canada. The company has the biggest network of telephone call centres in the country, as well as the largest pre-recruited household and online panels. Ipsos Reid's marketing research and public affairs practices offer the premier suite of research vehicles in Canada, all of which provide clients with actionable and relevant information. Staffed with seasoned research consultants with extensive industry-specific backgrounds, Ipsos Reid offers syndicated information or custom solutions across key sectors of the Canadian economy, including consumer packaged goods, financial services, automotive, retail, and technology & telecommunications. Ipsos Reid is an Ipsos company, a leading global survey-based market research group.