The view that businesses should fight climate change, conscientious personal health and aligning with brands that reflect consumers’ personal values were the top trends in 2021 across Southeast Asia, the Ipsos Global Trends Study 2021 study reveals.

The Ipsos Global Trends Study 2021 is the latest instalment of the wide-ranging Ipsos survey series that seeks to understand how global values are shifting. This year’s update polls the public in 25 countries around the world, including Singapore, Indonesia, Thailand, and the Philippines in Southeast Asia.

The survey reveals a world where public attitudes and values have changed less than might be expected under pressure from the pandemic. The changes in the data tend to be driven by long-running trends in public opinion that pre-date COVID-19.

Among other key findings in the study:

Climate change and the environment

Concern about the climate was identified as the strongest global value in the Global Trends 2019 survey and its position has strengthened during the pandemic.

In Singapore, 91% agree that we are heading for environmental disaster unless we change our habits quickly. Neighbouring countries in Southeast Asia, including Indonesia (96%) and Thailand (93%) ranked in the top two of the 25 countries surveyed, with the Philippines (89%) expressing a similar sentiment.

Emerging markets are most likely to see dealing with climate as the imperative: more than eight in ten Colombians (82%) as well as a similar proportion of Chinese and Brazilian citizens (78%) say companies prioritising the environment is more important to them.

More than nine in 10 Singaporeans (94%) say that they need to do more to look after themselves physically, compared to the global average of 89%. And three quarters (74%) will sacrifice convenience if it means getting healthier products. 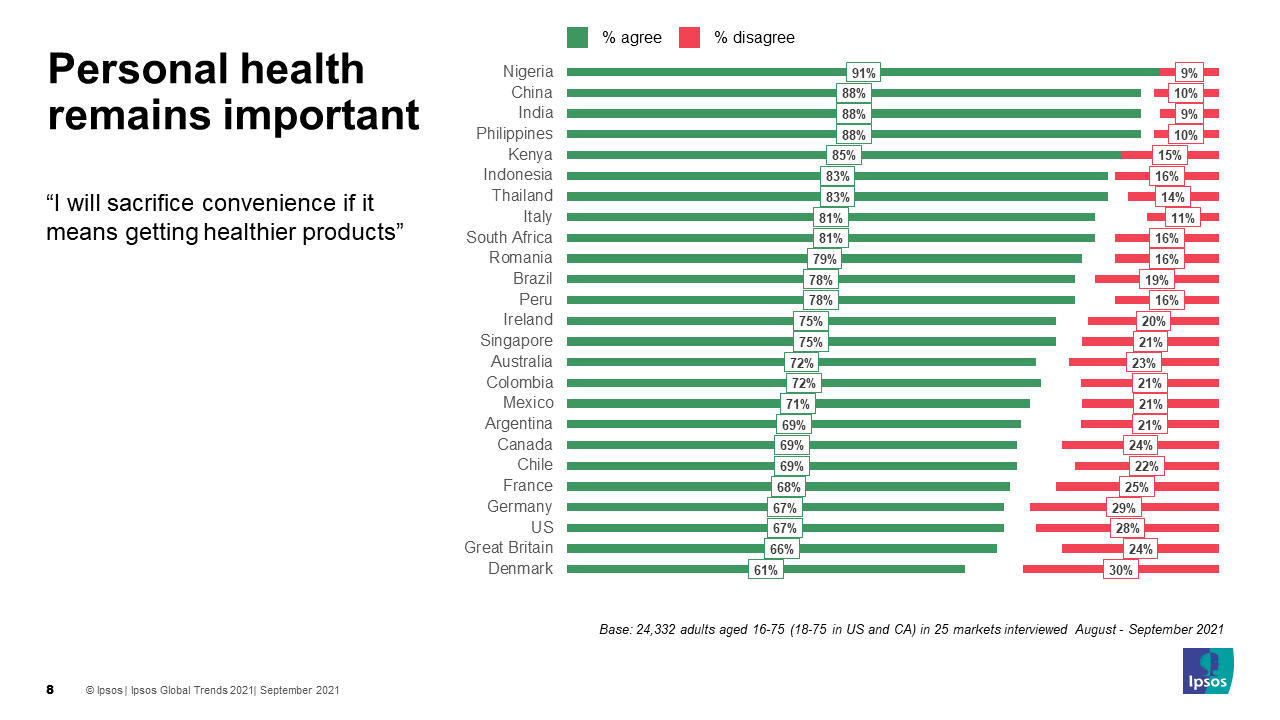 The importance of brands aligning with personal values has been accelerated over the pandemic: this year seven in ten across the 25 countries surveyed agree that they tend to buy brands that reflect their personal values (70%).

In Singapore, 87% believe that it is possible for a brand to support a good cause and make money at the same time. In addition, 64% of people are generally willing to spend extra for a brand with an image that appeals to them.

Singaporeans are the least concerned of any of the 25 countries surveyed about buying products from their own country, at 53%.

Since 2013, the importance of brands being associated with values has grown cross a number of key markets, with 17 percentage point increases in agreement in Britain and France, and a rise of 16 points in the US. In Singapore, 72% of people agree with this statement.

Similarly, there is high interest in business leaders getting involved social issues, with more than eight in ten of the public in Singapore agreeing that business leaders having a responsibility to speak out on social and political issues facing their country. 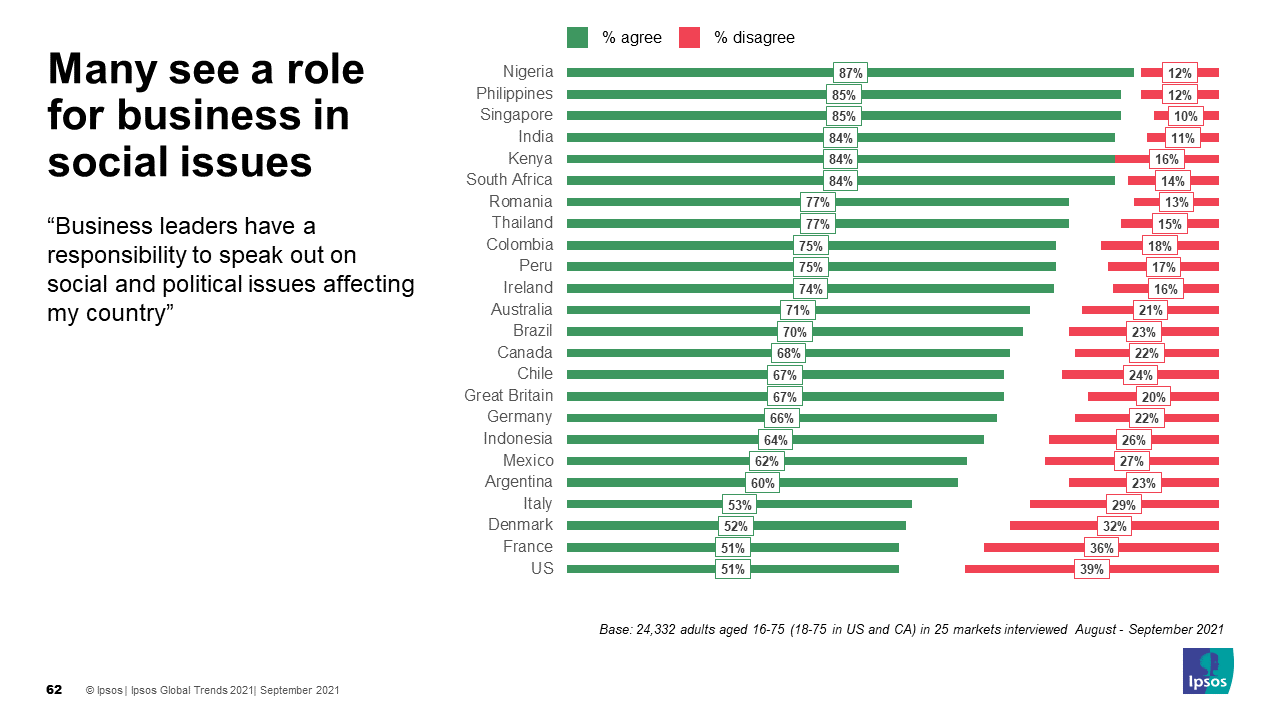 However there remain strong tensions in the public interest in businesses showing wider social purpose, with 45% of the sample across all countries and 49% in Singapore agreeing that “I don’t care if a brand is ethically or socially responsible, I just want them to make good products.”

Singaporeans also have high levels of trust In online recommendations from a well-known site or app, at 80%.

Rising belief in science is another long-term trend. Six in ten of the 25-market global sample agree that eventually all medical conditions will be curable (60%) – a figure which has been rising since the start of the Global Trends series in 2013 and continued to rise through the pandemic as vaccines were developed in record time.

Optimism is again higher among those in emerging markets, with nine in ten Indonesians (90%) and more than eight in ten in Thailand and the Philippines (84% and 82%) agreeing that science will conquer all diseases. In Singapore, 53% agree that “eventually all medical conditions and diseases will be curable”.

However there is a longer-term increase in positivity: in 2013, just a quarter agreed all medical conditions will eventually become curable.

Attitudes to data and technology

More than three quarters of Singaporeans (78%) say they are concerned about how information being collected about them when they go online is being used by their own government. Singapore ranked fifth highest with this concern.

Singapore tops the list of 25 countries at 91% (compared to 84% global average) with those that agree with the statement that it is inevitable they will all lose some privacy in the future because of the power of new technology.

However, attitudes towards data have not become more anxious over this time. Instead, the survey has recorded rising apathy and even openness to sharing personal data. In fact, 83% of Singaporeans can’t imagine life without the internet, the third highest of all countries surveyed.

Katharine Zhou, Managing Director for Ipsos in Singapore said: “The 2021 Ipsos Global Trends study shows Southeast Asians’ concerns are more pronounced than other parts of the world about the rising threat of climate change, the need to look after themselves physically, and for brands to align with good causes. It is also interesting to note that despite high levels of concern in Singapore about how data is collected about them online is being used by the government, they have become resigned to the view that a loss of privacy is inevitable – with Singapore topping the list of countries with this view.

“Global values, including those in Southeast Asia, have continued to remain the same, and climate concerns were not interrupted by COVID-19. Despite this, the world is changing fast where climate concern is turning into climate action, online and offline are becoming a blended reality and a view that political leaders should become social leaders."