The conversation around gender is shifting. No longer is it just about traditional gender roles. Now, it’s about the role of gender itself. No longer is it just about two genders. Now, it’s about the unbundling of sex and gender and identity and the spectrum of gender identities. No longer is it the empowered heterosexual white men making the rules and enforcing the definitions. Now it’s about how everyone can define themselves by how they feel inside rather than by their sex assigned at birth. And, increasingly, it’s about how individuals are living those definitions without much regard for how others would choose to label them.

Language itself is at the center of the conversation. Whether it’s a classroom where the children choose stickers each morning with the pronouns to reflect how they feel that day – some kids always use the same, some don’t. Or the protests in Argentina where teens are demanding gender-neutral nouns in Spanish, a language where every noun is assigned a gender. Or the Merriam-Webster dictionary accepting the singular “they” in its definitions to recognize its use by those who identify as nonbinary.

People are starting to really talk about gender

This isn’t a conversation that everyone is having…yet. One indicator is Google trend data for searches of “gender fluid” or “nonbinary.” There were essentially no searches at all until five years ago and relatively few now. A recent survey by Playboy magazine found that a majority of American adults have no idea what “gender nonbinary” even means. (If you’re one of them, please see our glossary.)

Nor is it a discussion that everyone is comfortable having. In an Ipsos survey of men, 31% said they feel excluded from the gender spectrum discussion. A similar number are actively angered by the conversation. Perhaps because 44% feel they will be attacked if they say what they’re thinking.

But even without talking about it, people still have opinions and those opinions are somewhat fluid depending on the language used. An Ipsos KnowledgePanel survey found that nearly six in ten think that gender is defined by the biology you were born with. Meanwhile, while more agree than disagree that a person can only be a man or a woman and not anything in between, more also agree that gender identity is a spectrum (see charts below). The wording matters in research.

Not surprisingly, the LGBTQ community is more accepting of fluidity of gender. But even among this community, 16% still agree and another 14% neither agree nor disagree.

Contrary to conventional wisdom, the role of gender is a conversation that has been around forever. And Eastern and native cultures have recognized a gender spectrum for centuries. Western cultures have been particularly wedded to the idea that gender is a binary. Yet in the last several centuries there have been cultural touchpoints, from the flamboyance of Baroque men’s fashion, to musicians like gender-bending David Bowie (who, in 1974 sang, “You’ve got your mother in a whirl. She’s not sure if you’re a boy or a girl.”) to the popularity of current TV shows like “RuPaul’s Drag Race” or “Pose.”

Media and brands are catching up

But the media is far from the only industry for whom this is becoming central. We have all been spectators in the transformation of the Barbie brand, from one with clearly defined gender roles, to one that is much more fluid, modern and relevant. And while toys might be one arena in which the shifting definition of gender has a ready impact, the potential implications are much broader for many industries. Think about apparel and retail, which have for centuries been divided between traditional male/female splits. What are they to do when cisgender men start shopping for dresses or jewelry?

Products traditionally designed for men or for women should start rethinking whom their products serve. What would a gender-neutral muffin pan look like? What features would a gender-neutral power saw need? We might take cues from the cosmetics and beauty industry (see WTF’s Beauty issue), which has started to design cosmetics for a broader set of consumers – men, women, transgender and anyone who wants to try them out. If P&G’s Always brand can remove overtly feminine symbols from its menstruation products in response to concerns from the trans community, there are probably steps your brand can take, too. For our role in the conversation, What the Future tackles the issue from a number of perspectives, especially trying to give voice to the historically under-heard. We do this through data, especially by utilizing the Ipsos KnowledgePanel, giving us a nationally representative view of the issues as well as boosting the voices of the LGBTQ community. We also do it through interviews with experts who are leading voices in the discussion. As we embark on a new decade, we sense that there is a definite shift happening. The Williams Institute at the UCLA School of Law estimates that there are about 1.5 million transgender Americans, including 150,000 youth. Add to that a growing number of gender–fluid people and you start to reach a critical mass of people who at least have personal connections. For instance, the Ipsos KnowledgePanel survey found that about 20% of Americans age 18 to 34 have an acquaintance who is transgender. In the same study, 2.5% of Americans age 18 to 24 identify as nonbinary. And while these numbers may seem small in percentage terms, this will be a conversation that grows and sparks dialog into the future.

If you look at age splits on any of this data, you’ll see divides open along generational lines. Which means if these questions had been fielded decades ago, the answers would likely have been very different. That’s how quickly the conversation is changing. For this reason, we find this issue of What the Future perhaps our most forward looking. But that is the entire reason for What the Future’s being: to help you get ahead of the curve.

How key points in the gender conversation stand today.

Please indicate the extent to which you agree or disagree with the following: 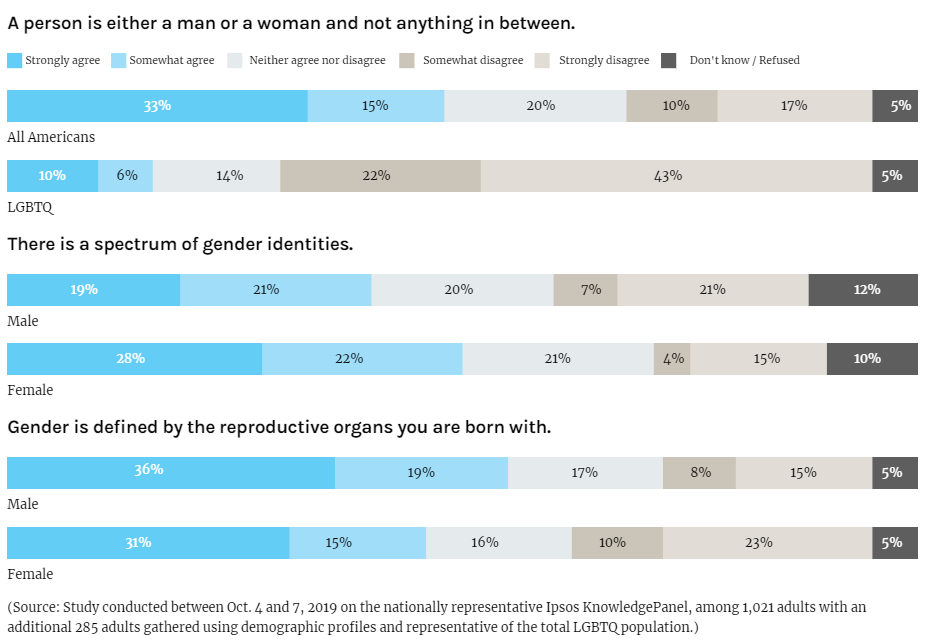 For brands and media, the discussion about gender is evolving from representation to a more inclusive definition of expression. In Ipsos' latest What the Future report, industry executives and thought leaders weigh in about how these changes will shape business in the coming years. For this edition, Ipsos surveyed more than 19,000 people around the world – and included a boosted sample of LGBTQ individuals – to understand global attitudes about gender today with an eye towards the future. There's a handy glossary to get you up to speed on evolving terminology. Click here to access the full edition.