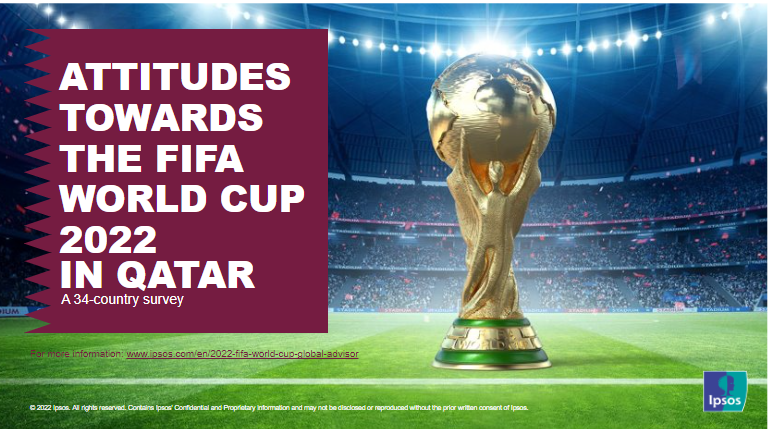 "While India has never been a qualifier/ qualifying team at the FIFA World Cup tournament, the event per se is a major draw among urban Indians – especially among those aware of FIFA and following the game of soccer - given the sheer experience of watching top soccer teams and their iconic world class players slugging it out.  The global event has a lot of stickiness among soccer enthusiasts. And a great opportunity for brands to connect with their key target groups,“ says Amit Adarkar, CEO, Ipsos India.

Football enthusiasts in India say they will be watching the FIFA World Cup 2022 matches on multiple screens: 45% on TV, 42% on internet and 38% on any mobile device. Interestingly, global football fans too displayed similar preferences of gizmos in the same pecking order: 41% will watch on TV, 20% on internet and 15% on the mobile device.

Behavior during FIFA World Cup 2022 (among those who are aware of FIFA and intend watching the matches).

FIFA World Cup 2022 kicks off in Qatar from November 20th to 18th December, which team is likely to win the trophy and which team will emerge the runner‘s up?

"The usual suspects are the front runners for the winner and the runner’s up spot. And it is hard to predict the outcome at this juncture, as the views were divided among football enthusiasts,“ added Adarkar.

At least 6 in 10 urban Indians polled (60%) claimed to be enthusiastic followers of soccer/ football. While, almost 4 in 10 global citizens (39%) claimed to be following soccer. Markets that claimed to follow the sport of soccer/ football most, included, Indonesia (69%), Saudi Arabia (67%) and United Arab Emirates (65%). Globally, India emerged 4th among 34 markets covered in the survey, in its enthusiasm towards the sport of football/ soccer. The markets following soccer least were Japan (14%), Canada (15%), Hungary (18%) and the US (19%).