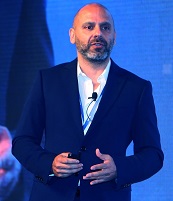 When we used to describe the previous years as challenging, the year 2020 made us rethink and redefine the concept of the word challenging all together. Never in anyone’s dreams have we thought that we go through a global sanitary crisis of this magnitude.

What started as a virus in China by the end of 2019 transformed to a worldwide pandemic that paralyzed the whole world as of March 2020. Covid-19 brought much of the global economy to a halt, which has had a drastic impact on every aspect of business. There have been major shifts in global and local economies and business entities. Companies were forced to find alternatives to working from office; they suffered financially, and many had to let go of a great part of their employees.

One of the many lessons learned during this pandemic is that developed countries dealt in far better way with this crisis, compared to developing markets, in great part due to the governmental support extended to companies and individuals in these developed markets. While across the MENA region, the negative impact of the crisis was far more significant, which forced companies to deal with a crippling situation in various means. The easiest way was to cut cost and often times lay off employees.

Going back to the disruption the pandemic caused on the regional advertising expenditures, there was a big drop compared to 2019, specially on the offline media level. However, this drop was not as significant as many people predicted, and not inherent to the measures taken by companies, nor the prevailing gloomy atmosphere and the business sentiment felt in the marcom circles.

The total advertising expenditures in MENA in 2020 dropped from 4.03 Billion USD in 2019 to 3.127 Billion USD, which is equivalent to a 22% decrease. Those numbers are based on Ipsos’ estimation of the real numbers, following many researches, digging and examinations. While if we look at the numbers based on the official rate cards, the discrepancy between the two sets of figures is huge, as the numbers indicate an ad spend of 20 Billion USD.

This result of course, as we always said and wrote, is based on the huge disparity between the rate cards and the real spend, specially when it comes to traditional media, and TV more specifically. And still, we are not seeing any solution for this major anomaly.

My analysis will only be based on Ipsos’ estimation of the real advertising expenditures in the region.

Wherever consumer behavior has shifted, advertising spend has adjusted in response. It makes little sense for advertisers to spend on media that have no audience. As confinement measures were introduced around the world, out-of-home and cinema advertising shrank almost instantly; print advertising also fell.

So, looking at the numbers by media, we notice that Digital is now, and for the second consecutive year, the biggest media in our region overtaking TV.

Lockdowns restricted mobility giving little onus for companies to purchase media that are usually seen or interacted with when on the move, like out-of-home adverting, Radio and Cinema. 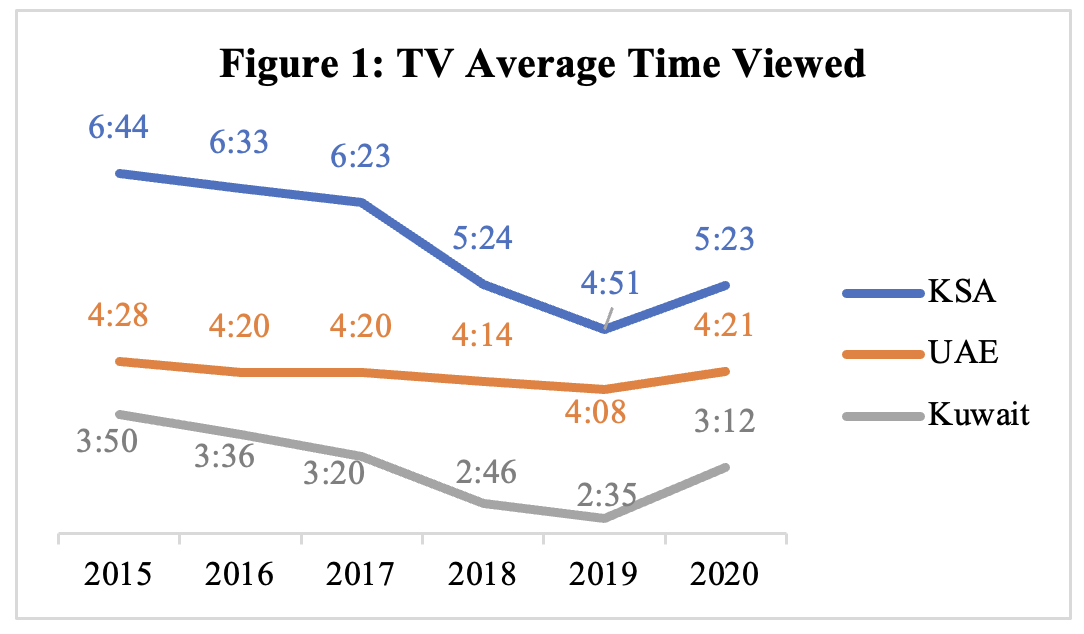 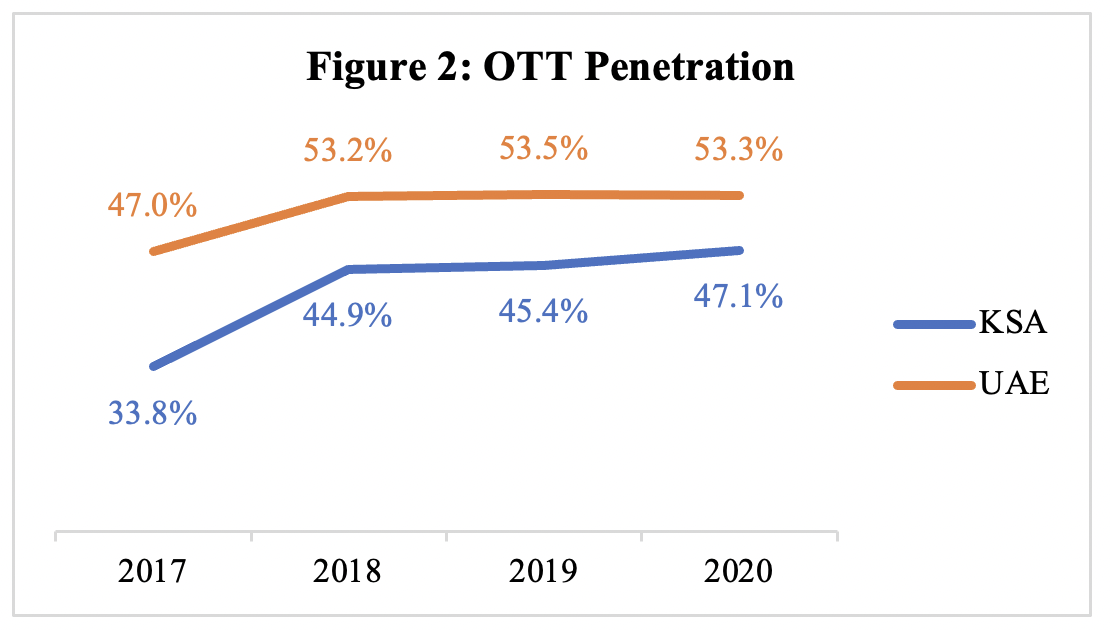 What does this say about media consumption? Forced by the pandemic and the many lockdowns, people were constrained to stay home and watch TV. This could be one of the few positive impacts of this pandemic on traditional media, as it has benefited the TV as a media and saved it from declining further. However, this increase in viewership was not reflected on the advertising expenditures, because the Adex on TV shows a 14% drop. This decline could have been more significant if not for the increased TV viewership, which led this media to gain market share.

Figure 2 shows in two markets-- KSA and UAE-- the penetration of over-the-top (OTT) providers and video streaming platforms, is also affecting the viewership on Linear TV, and the shift of the advertising expenditures to digital.

In 2021 we will track closely this trend to examine, once lockdown is lifted and life returns to a semi-normality, if the performance of Linear TV will go back to decreasing and OTT to an increase.

Another important media in our region, which used to be a huge media, is newspapers. Despite all the forecast about its demise, it is still a big media, one to take account of, with an ad spend of 232 million USD, a drop of 25% compared to 2019.

Figure 5 is showing the trend of readership in both KSA and UAE as examples, where there is a decrease in the traditional way people read the newspapers, but with an increase in reading those newspapers online. Yet, the offline readers are still higher than online, but the gap is getting smaller.

Another important media that looked very promising in previous years, but was badly affected by the pandemic, is radio.

Figure 6 shows two examples from KSA and UAE about the decline in time spent listening to Radio, as this media is mostly enjoyed when people are commuting. With people obliged to stay home and work from home, this media saw a sharp drop of 55% in comparison to 2019.

The same goes for OOH and Cinema, two media channels badly affected by the pandemic in terms of ad spend. As confinement measures were introduced around the world, out-of-home and cinema advertising shrank almost instantly.

Digital was the only media witnessing a growth, though a small growth of 2%, but still one indicative of a trend obviously on the upswing, as most clients have started shifting their ad budgets to online. 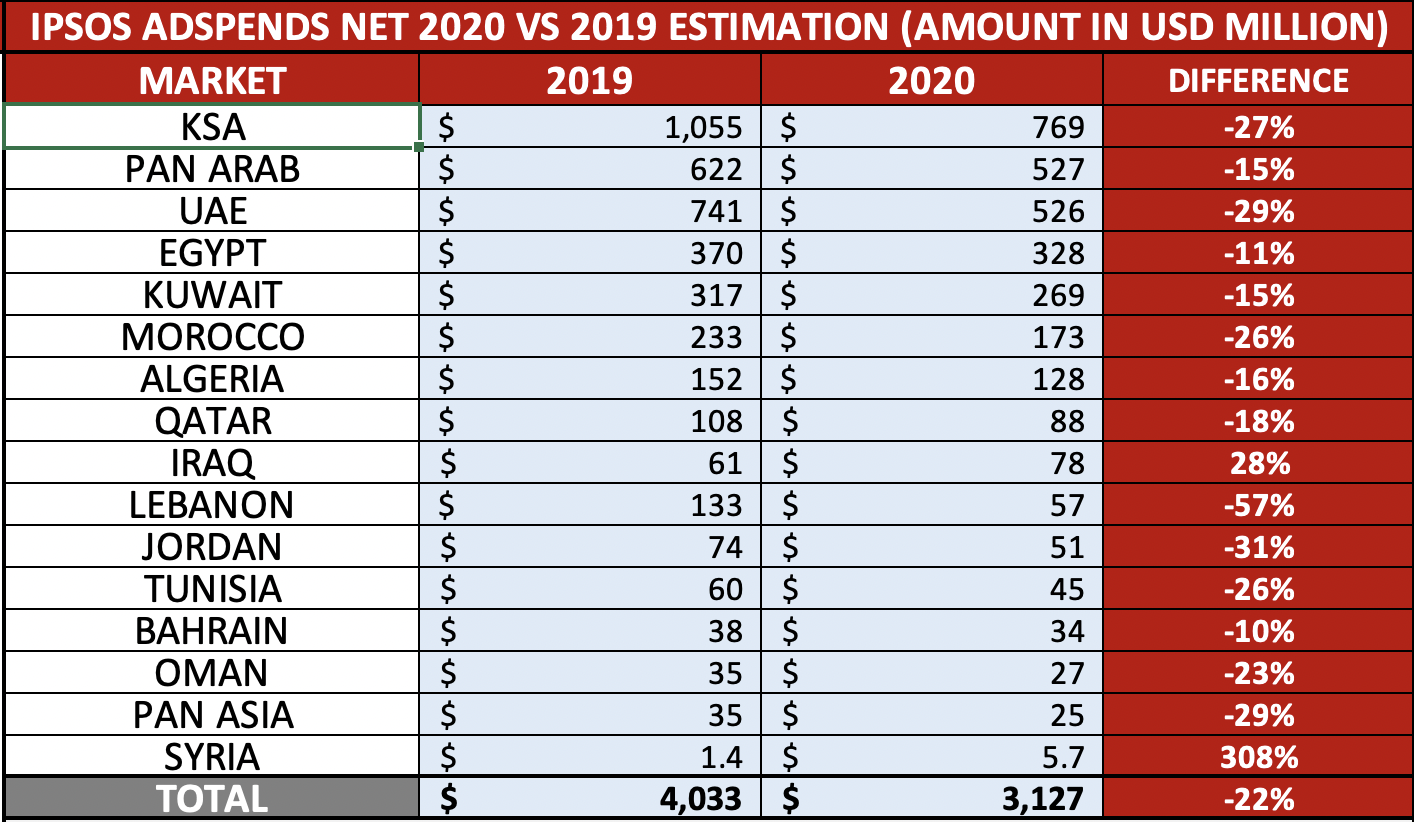 Now looking at the numbers by market, the KSA is taking the lead, and this is mainly driven by the Digital advertising expenditures targeting Saudis; the market dropped by 27% compared to 2019, mainly driven by a big decline in the OOH media.

The Pan Arab market, where most of the satellite TV stations are allocated, is ranked as the 2nd market in terms of ad spend with 527 Million USD, a drop of 15%; UAE comes 3rd very close to Pan Arab with 526 Million USD, mainly driven by digital, down by 29% as a total market, and this decline is mainly coming from OOH too.

Egypt has witnessed a drop of 11% only, due to the positive effect of the currency, and to a growth of TV, which rose by 11% compared to 2019, while most of the other media declined.

All the other markets witnessed a decline like Qatar, Oman, Bahrain, Tunisia, and the Pan Asian market; as for Syria, a small market relatively, it has enjoyed a growth.

To conclude, I would say the outlook in 2020 seemed negative of course, but not as negative as many people predicted. We believe the drop by 22% on total media is something that can be compensated in the coming years. Also, 2020 has confirmed the predominance of digital in our region, and the decline of other media mainly TV, despite the interesting fact that TV viewership has tremendously increased during the pandemic.

To wrap it up, here is a small overview about 2021, and our forecast for this year. We believe many media are set for a steady come back in 2021. The biggest winners will be OOH media and Radio, as they lost a lot of their value in 2020 but are set to make a strong rebound; TV in my opinion will very likely win back a lot of the losses, reaching a level that is close to 2019; and of course digital will keep on growing, and will confirm its dominance as the biggest and most wanted media in our region.