As the Labour Party continues a review of its policy on nuclear weapons, our new poll for STV News shows that Scots are split on the issue of whether they should be retained or scrapped in Britain.

Attitudes to the issue appear to differ depending on whether the question includes a ‘unilateral’ element which mentions the position of other countries. Half of our sample was asked whether they support or oppose the policy to ‘get rid of all nuclear weapons in Britain:’ Around a half (51%) of Scots agree with this proposition, including 41% of Labour supporters and 72% of those who support the SNP. Four in ten Scots (40%) oppose getting rid of all nuclear weapons while the remaining 9% are unsure.

However, the other half of respondents were asked whether they support or oppose the policy ‘to get rid of all nuclear weapons in Britain even if other countries keep theirs.’ Support at this question reduces to 44% and is marginally outweighed by opposition which rises to 46%. Support for this unilateral option falls to 64% among SNP supporters and to just a third (33%) of Labour supporters. 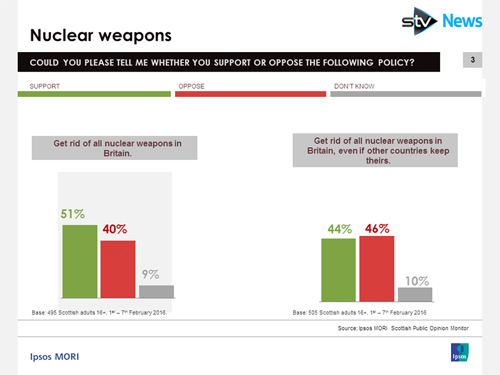 ‘Although the issue of nuclear weapons is not a devolved issue and is therefore not likely to be at the front of voters’ minds ahead of May’s Holyrood election, it is still very topical and is being keenly debated, particularly in the Labour Party. These results show that Scots are split on the issue but are more likely to oppose scrapping nuclear weapons if they are aware that other countries will keep theirs.'