The most important issue that will help Londoners decide who to vote for in the election is creating jobs and economic growth: six in ten  (59%) Londoners say this will be the key issue for them. However, candidates Johnson and Livingstone are neck-and-neck in terms of being seen to have the best ideas of how to create jobs and growth (27% each). Perhaps more tellingly, four in ten Londoners (40%) do not know which candidate has the best ideas on this issue. The high levels of people being unsure who has the best ideas on issues shows that the race is open, with plenty of minds still to be made up. 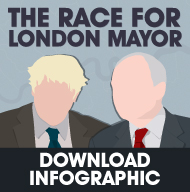 Boris Johnson does hold a small lead over Ken Livingstone (26% to 22%) in being seen to have the best ideas on crime - the second most important issue in helping Londoners who to decide to vote for (49%), although again around four in ten say they do not know which candidate has the best ideas (39%).

Improving public transport (38%) and building affordable housing (37%) were the other top issues for Londoners choosing how they would vote. Boris Johnson holds a small lead over Ken Livingstone on transport (35% to 31%) while Mr Livingstone holds a 10 point lead on housing (28% to 18%) – although half of Londoners say they don’t know who has the best ideas on housing.

The  London Mayoral Election is closest thing Britain has to a Presidential Election, with personalities playing an important role. With that in mind, it is interesting to see that both candidates clearly have their strengths and weaknessesBoris Johnson is more liked than Ken Livingstone – 43% say they like Mr Johnson the most, 35% say Ken Livingstone.

Ipsos interviewed a representative sample of 1,001 adults aged 18+ across London. Interviews were conducted by telephone between 10th and 13th March 2012.  Data are weighted to match the profile of the population.