Enhancing the quality of life for people with long term conditions remains a key priority for the NHS, and primary care has been identified as crucial to the support the NHS can offer to these people. The GP Patient Survey (GPPS) helps us understand a little bit more about the experiences of these patients in relation to general practice. 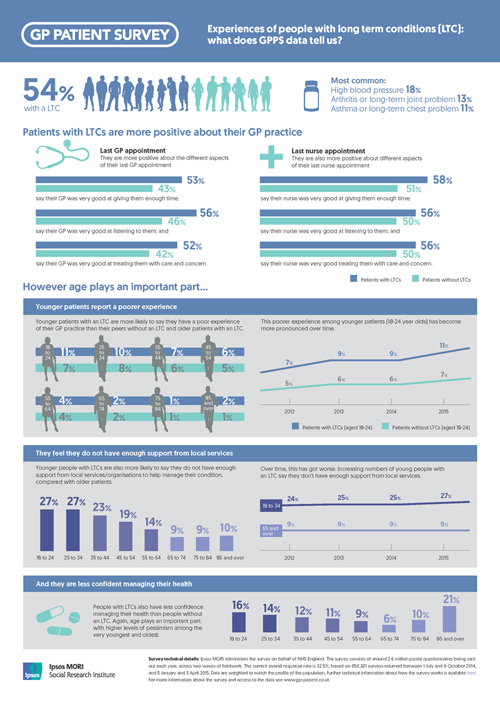 We also know that these age groups want different things from their GP. Ipsos’s work for the London Health Commission showed that older patients emphasised the importance of seeing the same doctor each time they visited, whereas for younger patients the convenience of appointment was more important.

For many patients with a long-term condition, it’s not just the GP practice where support can be found. However, GPPS data shows that eleven percent of these patients say they do not have enough support from local services or organisations to help manage their condition. Other recent work by the Ipsos ethnography team on behalf of NHS Improving Quality showed that people often feel the system is not set up to cope with their multiple and complex needs, and can feel there is no support linking all of their conditions and focusing on them personally and holistically.

Again though, age is crucial. GPPS also shows that younger patients with a long term condition are more likely than older patients to say they do not have enough support; twenty seven percent of the youngest group (18-34) say this compared to just nine percent among the oldest (over 65). This gap has become more pronounced over time; increasing from fifteen percentage points in 2012 to eighteen percentage points in 2015.

Finally, people with long term conditions report lower levels of confidence in managing their health overall. However age again plays an important part with higher levels of pessimism among the very youngest and oldest.

While it's clear that all patients with long term conditions need support from their GP and other services, it's important that these services recognise the differences within this group. We've just concentrated on age here, but there will also be differences by other things, not least the specific conditions patients have.

GPPS provides a rich source of information on patient experiences of their GP practice. You can access and analyse the results by going to www.gp-patient.co.uk or email the team.

Ipsos administers GPPS on behalf of NHS England. The survey consists of around 2.6 million postal questionnaires being sent out each year, across two waves of fieldwork. The current overall response rate is 32.5%, based on 858,381 surveys returned between 1 July and 9 October 2014, and 5 January and 3 April 2015. Data are weighted to match the profile of the population. Read further technical information about how the survey works.

For more information about the survey, and access to the data see www.gp-patient.co.uk.