New research from Ipsos reveals that financial worries will prevent many adults aged 16-75 in Great Britain from taking foreign holidays in the next 12 months, with one in two people (50%) unlikely to consider going to Europe and nearly six out of ten (59%) unlikely to go somewhere outside of Europe.

Amongst those who are not likely to travel abroad, financial concerns and cost of living are the most common reasons for staying in the UK (46%), but Covid-19 remains a concern for 31% and more than one in four (27%) say an overseas holiday is too much hassle and inconvenience. With flight cancellations set to continue throughout the summer, 26% cited concerns about port/airport delays. Surprisingly, nearly one in four (23%) do not have a valid passport.

The popularity of staycations is good news for the UK holiday industry. Most people are likely either to take daytrips from home in the next 12 months (68%) or to holiday in the UK (64%). Thinking about 2022 so far, 37% say they have visited somewhere in the UK, staying at least one night away from home, whilst 19% have been to Europe and only 11% have holidayed outside of Europe. One in three (33%) have not taken any holidays.

Amongst those not likely to take a holiday outside the UK in the next 12 months, one in five (21%) say they prefer holidaying in the UK and 14% do not like travelling abroad. 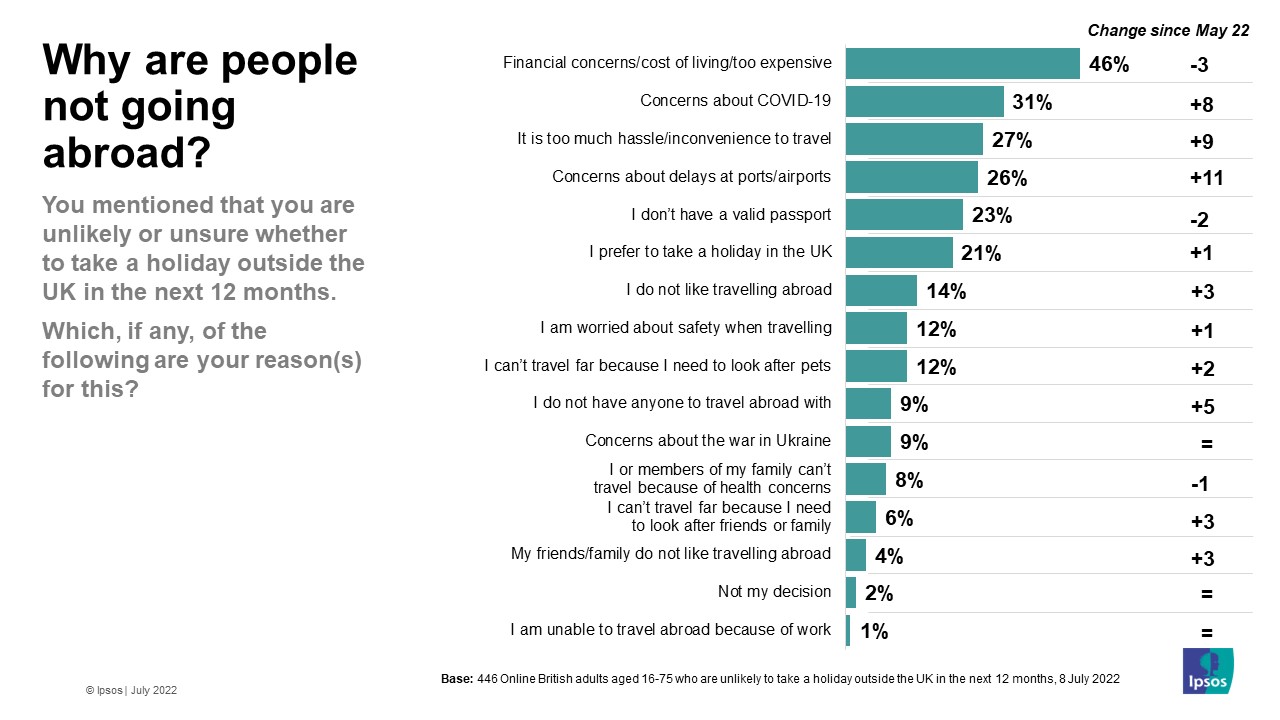 As we approach the peak holiday season, we’re seeing many people express reservations about travelling abroad, with staycations or trips in the UK an alternative option. Our research highlights the financial strain facing families across the country, but also shows there are still concerns around COVID-19, which saw a 30% spike in infection rates at the beginning of July.
The cost-of-living crisis, coupled with reports of travel delays and flight cancellations are making people think twice about overseas travel and this presents a great opportunity for the UK travel industry.