New research by Ipsos shows, in her Platinum Jubilee year, Queen Elizabeth II is the nation’s favourite member of the Royal family. Just under half (45%) of Britons say the Queen is one of their most liked Royals, followed by 34% who choose Catherine, the Duchess of Cambridge (an increase of 7 percentage points since March 2021), and 31% who name her husband, Prince William, the Duke of Cambridge.  The research was carried out last week, before the most recent announcements. 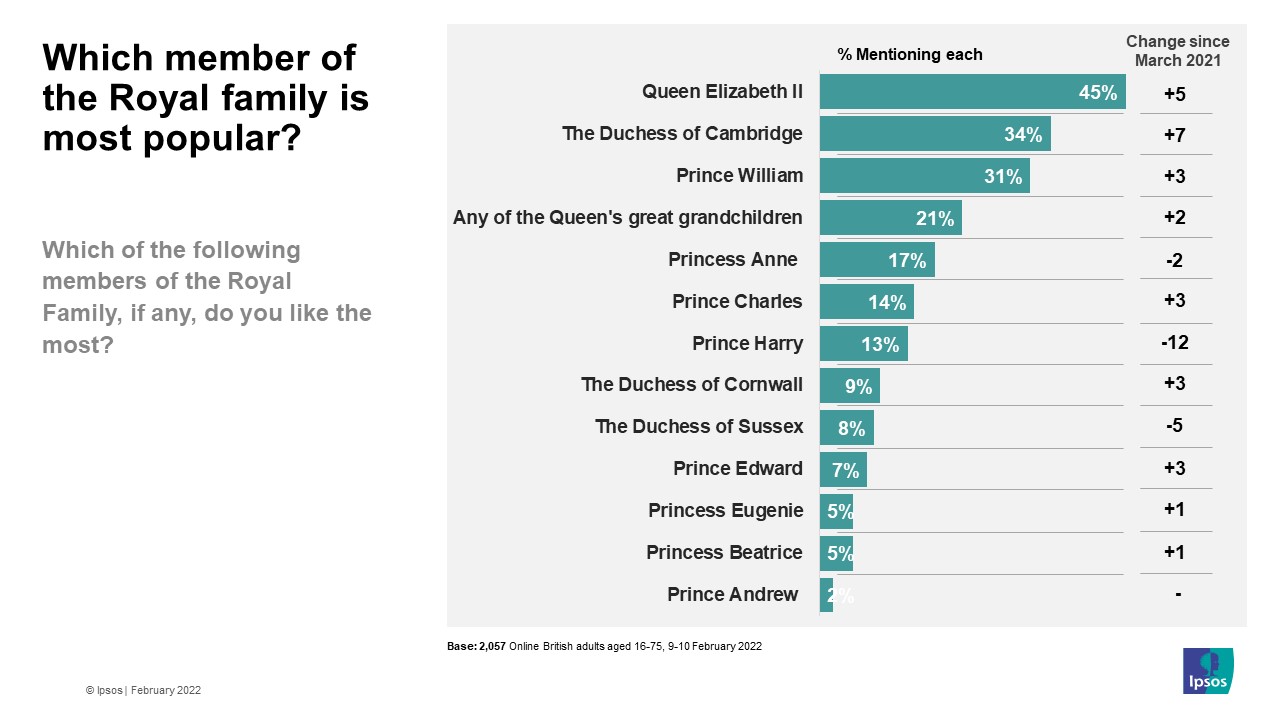 Following the recent announcement, four in 10 Britons (38%) are in favour of the Duchess of Cornwall becoming the Queen Consort if her husband, Prince Charles, becomes King. This outweighs the 28% who say they are opposed to this while a further 29% are neutral.

Over half (54%) of those who are in favour of the Duchess becoming Queen Consort say this comes as a result of her support of Prince Charles, while a similar proportion put it down to the fact she would be married to the King (48%). Just under half say they support Camilla becoming the Queen Consort due to the support she has offered the Queen over the years (47%) or because it is the Queen’s wish (45%). Four in 10 say they are in favour due to her royal service (40%) or her charity work (39%). A quarter (26%) cite her personality and character.

Almost half of Britons say abolishing the monarchy would be worse for Britain in the future (46%) while only 22% say it would be an improvement. Around a quarter (23%) say it would make no difference. The balance of opinion shows little change from last year, though there are fewer with a neutral opinion.  Older Britons and those who voted for the Conservative Party in 2019 are most likely to say abolishing the monarchy would be worse for the country, 64% of 55-75-year olds and 68% of Conservative voters believe this. 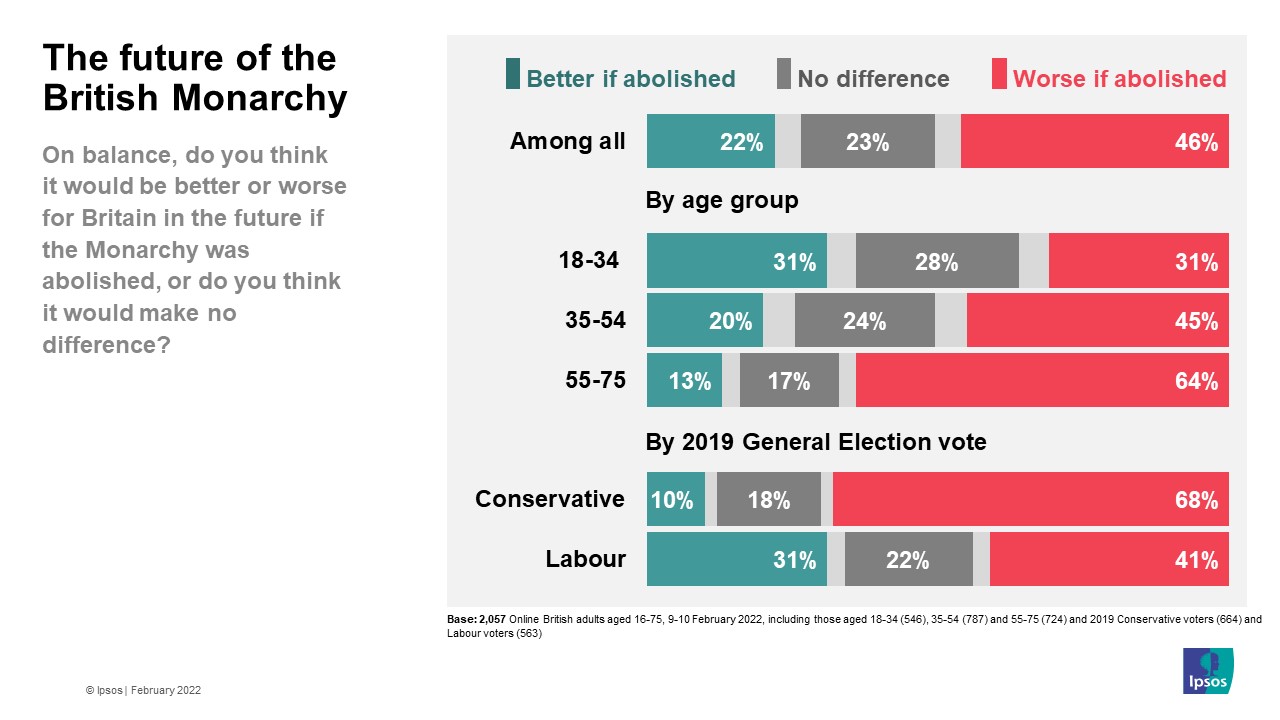 It may come as little surprise that people continue to be interested in the British Royal Family. Almost 6 in 10 (56%) say they are interested in hearing news about the Queen and her family while 4 in 10 (43%) say they are not. Interest has increased slightly over the past few years. In March 2021 51% said they were interested, before that in 2018 45% said the same. 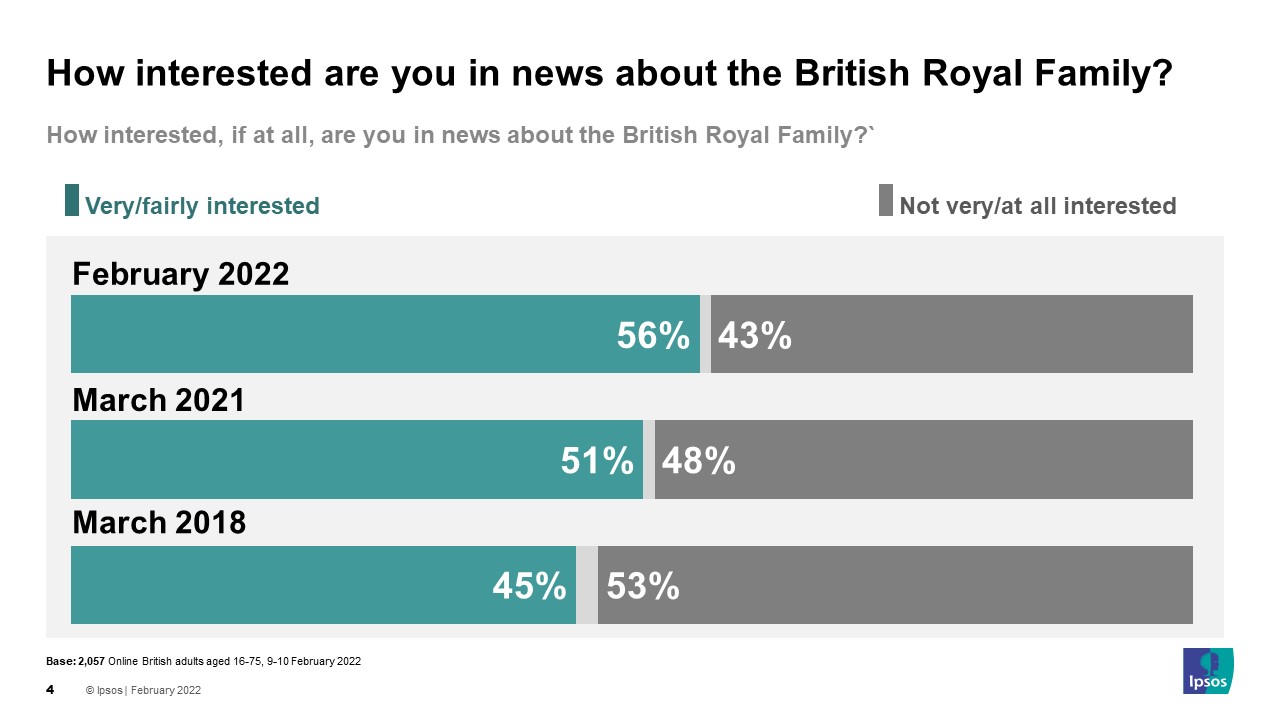 There is no denying that the Royal Family has had a turbulent few years, but public opinion still contains more supporters than critics of the institution.  In the run up to the Platinum Jubilee celebrations, Queen Elizabeth II remains the most popular member of the Royal Family, with the Duke and Duchess of Cambridge also cementing their position.
After the announcement that the Duchess of Cornwall will become Queen Consort once Prince Charles ascends the throne, this is supported by 4 in 10 Britons (although not everyone has a strong opinion).  The support she has offered her husband and the Queen are clearly important factors in this, but so is it being the Queen’s wish, which also shows how the British public value their monarch.