New research by Ipsos in the UK shows many Britons report taking measures in response to rises in their cost of living.

As the cost of living crisis continues to squeeze, around two-thirds say they have kept their heating off when they would normally have turned it on (65%) while half (52%) are already going out socialising less than normal. 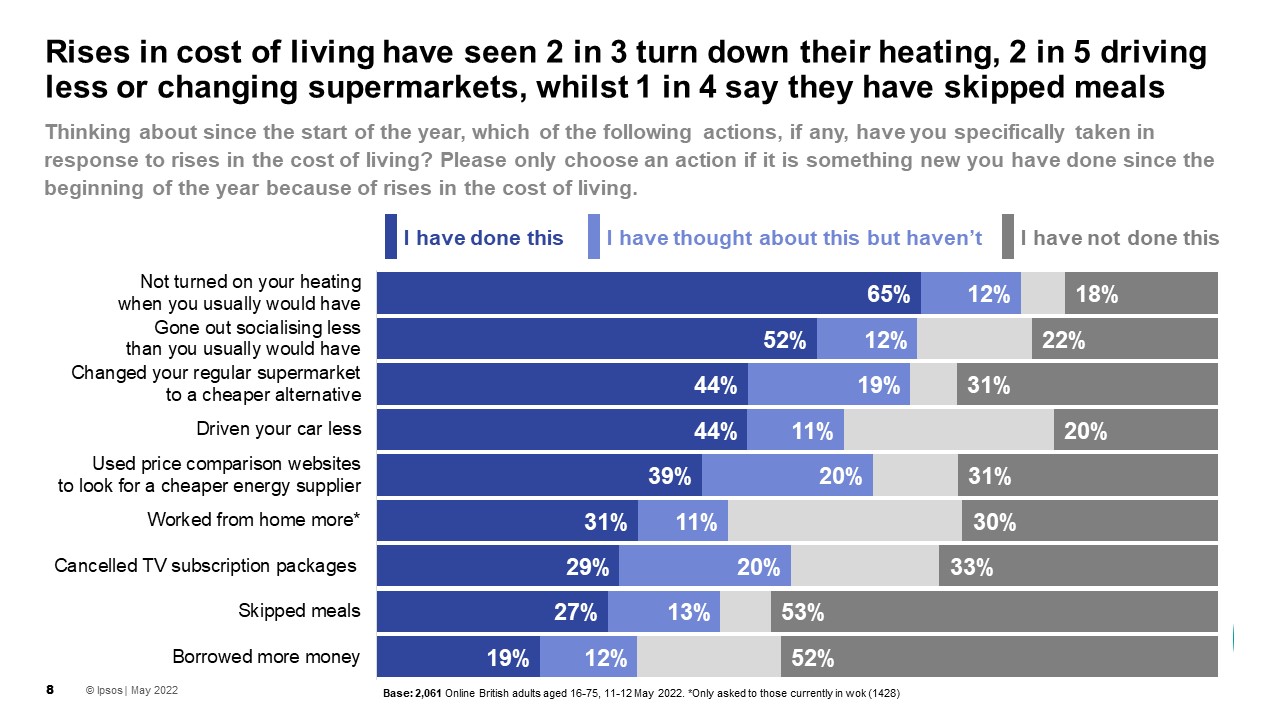 Around a quarter of Britons have already skipped meals in response to the cost of living crisis (27%), rising to one in three of those on lower incomes. Other actions taken include changing their supermarkets for cheaper alternatives (44%), driving their car less (44%) and using price comparison websites to look for cheaper energy providers (39%).

What do Britons expect?

Most Britons expect to see increases in the costs of essentials over the next 6 months. Almost 9 in 10 (87%) believe their utilities (e.g. water, gas, etc.) will go up while similar proportions expect to see the same effect on the cost of their food (86%) and other household shopping (80%). Around 3 in 4 think motoring fuel costs will go up (73%) while 64% believe the cost of going out socialising will increase. More than half (56%) believe costs of subscriptions, such as media or leisure, will go up while around 4 in 10 (43%) believe their mortgage or rent will become more expensive. 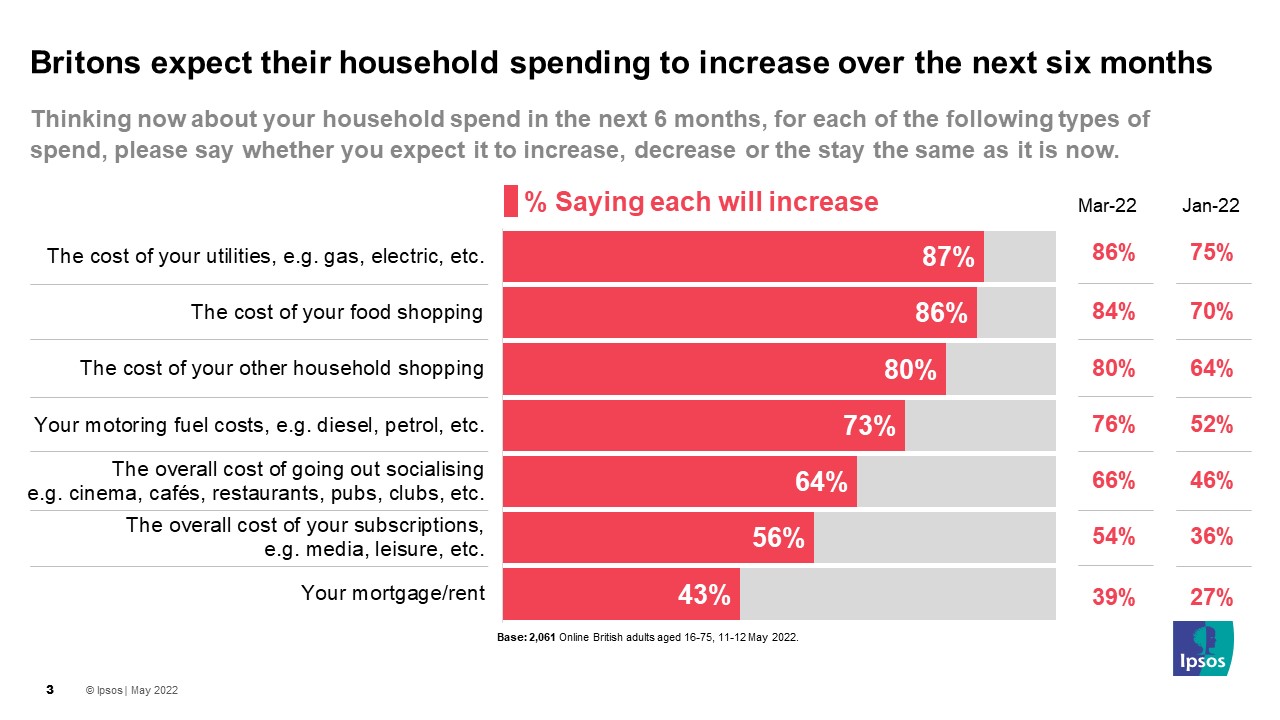 Where is the crisis expected to be worst?

People living in North East/Yorkshire and Humber and Greater London are most likely to say the cost of living over the next six months will be worse in their local area than other parts of the country (both 28%). Meanwhile, those in the South East (30%) are most likely to say their local area will not be as badly affected as other parts of the country. 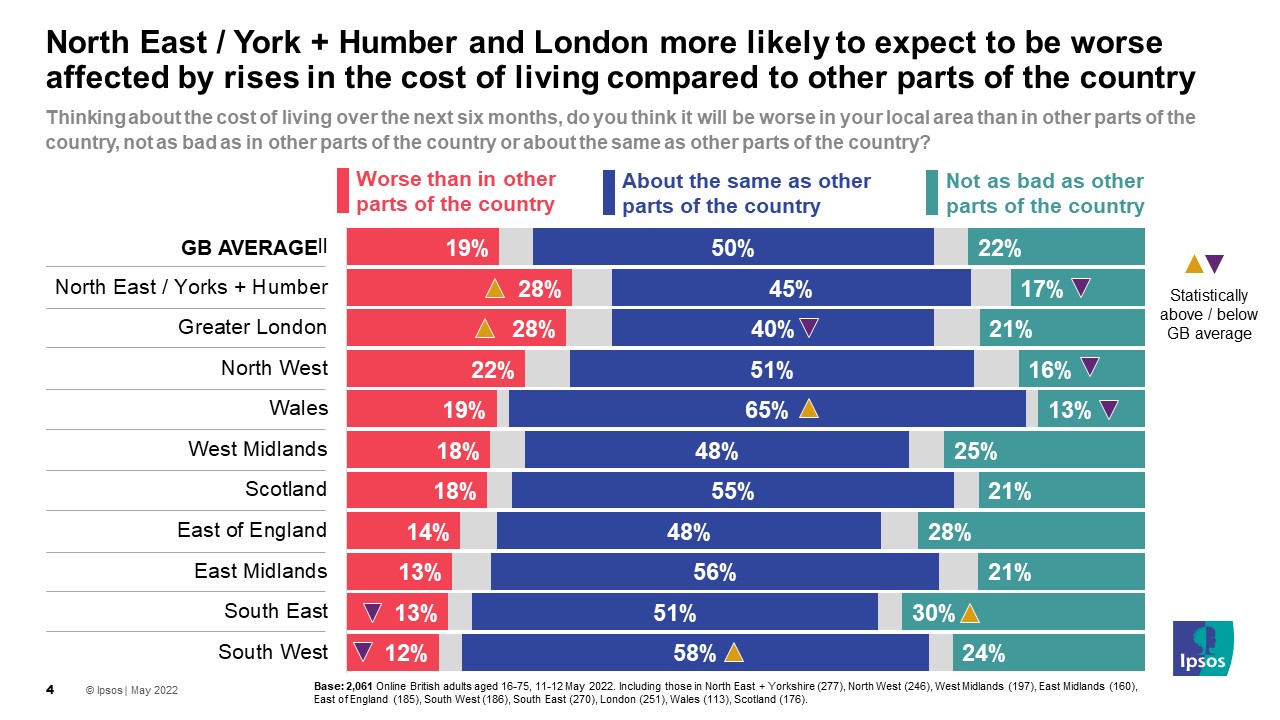 Across the country as a whole, 1 in 5 (19%) say the cost of living will be worse in their local area than in other parts of the country while half (50%) say it will be about the same as other areas and 22% expect not to be hit as badly as other places.

The role of the UK Government and local councils

Around three-quarters (76%) of Britons think the UK Government is not providing enough support to their local area on the cost of living, while only 10% say it is providing the right amount of support and 8% too much. There is little difference across party lines, 71% of those who voted for the current Conservative government in 2019 say it is not providing enough support while 82% of 2019 Labour voters say the same.

Just under two-thirds (63%) say their local council is not doing enough to support people while 16% say it is providing the right amount of support and 7% too much.

Concern about inflation is at a thirty-year high in Ipsos polling, and Britons across the country see the cost of living as both a national, local, and personal priority.  People are already telling us they have taken a range of actions to mitigate its effects – some with a direct impact on basics like food and heating – but given the economic forecasts there may well be more anxiety on the horizon.  This is going to maintain pressure on the Government to take more steps to help people through the cost of living crisis – already an area where they are less trusted than Labour, but this is an issue where even their own supporters want them to do more.

Ipsos interviewed a representative quota sample of 2,061 adults aged 16-75 in Great Britain. Interviews took place on the online Omnibus using the Ipsos.Digital platform on 11-12 May 2022. Data are weighted to match the profile of the population. All polls are subject to a wide range of potential sources of error.