Two-thirds (69%) of Captains disagree that they are confident in the ability of the Government to negotiate the best deal possible for UK businesses with the EU.  A significantly higher proportion of London-based Captains disagree (80% compared to 60% of Captains located outside the capital). Overall, a majority of business leaders (85%) agree that how well the Government handles Brexit negotiations is vital to their business. 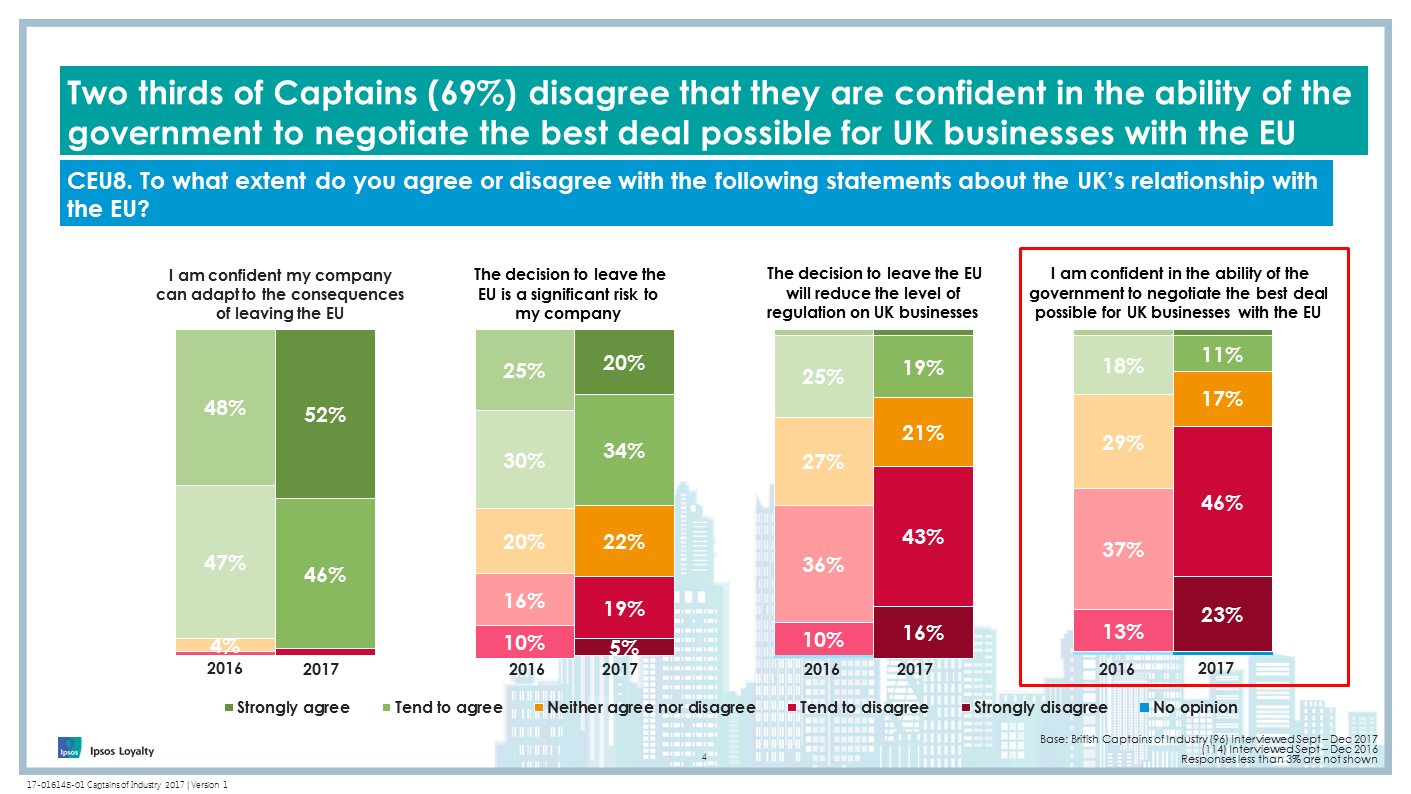 Unsurprisingly, 94% regard Brexit negotiations and the uncertainty surrounding them as the most important issue facing Britain today.  Captains regard the free movement and access of skilled labour (53%) and securing access to free/single market (28%) as the two most important aspects for the UK to try to obtain during negotiations.

The top three aspects Captains identify as being most important for their business in order to be successful in a post-Brexit UK are a transition period after Britain has left the EU, during which some aspects of EU membership still apply to Britain (88%), reducing the level and/or complexity of regulation (83%) and keeping it easy to recruit non-EU staff (82%).

More than three-quarters (78%) of Captains expect that the most likely outcome in the ongoing talks regarding the proposed exit of the UK from the EU by April 2019 will be that Britain will be in a transition period, during which some aspects of the relationship will still apply.

Captains' perceptions of the implication of Brexit for business to date is not as bad as they predicted 12 months ago.  While 56% of Captains feel that the business situation for their company is currently worse than it would have been if the UK had voted to stay in the EU – last year, Captains predicted that at this point in time 65% of them would have experienced a worsening position.  Similarly, 30% of Captains feel that since the referendum the business situation for their company remains unchanged.  Whereas 12 months ago, Captains predicted that at this point just 18% would state that voting to leave would make no difference to them.  Overall, almost all (98%) are confident their company can adapt to the consequences of leaving the EU. 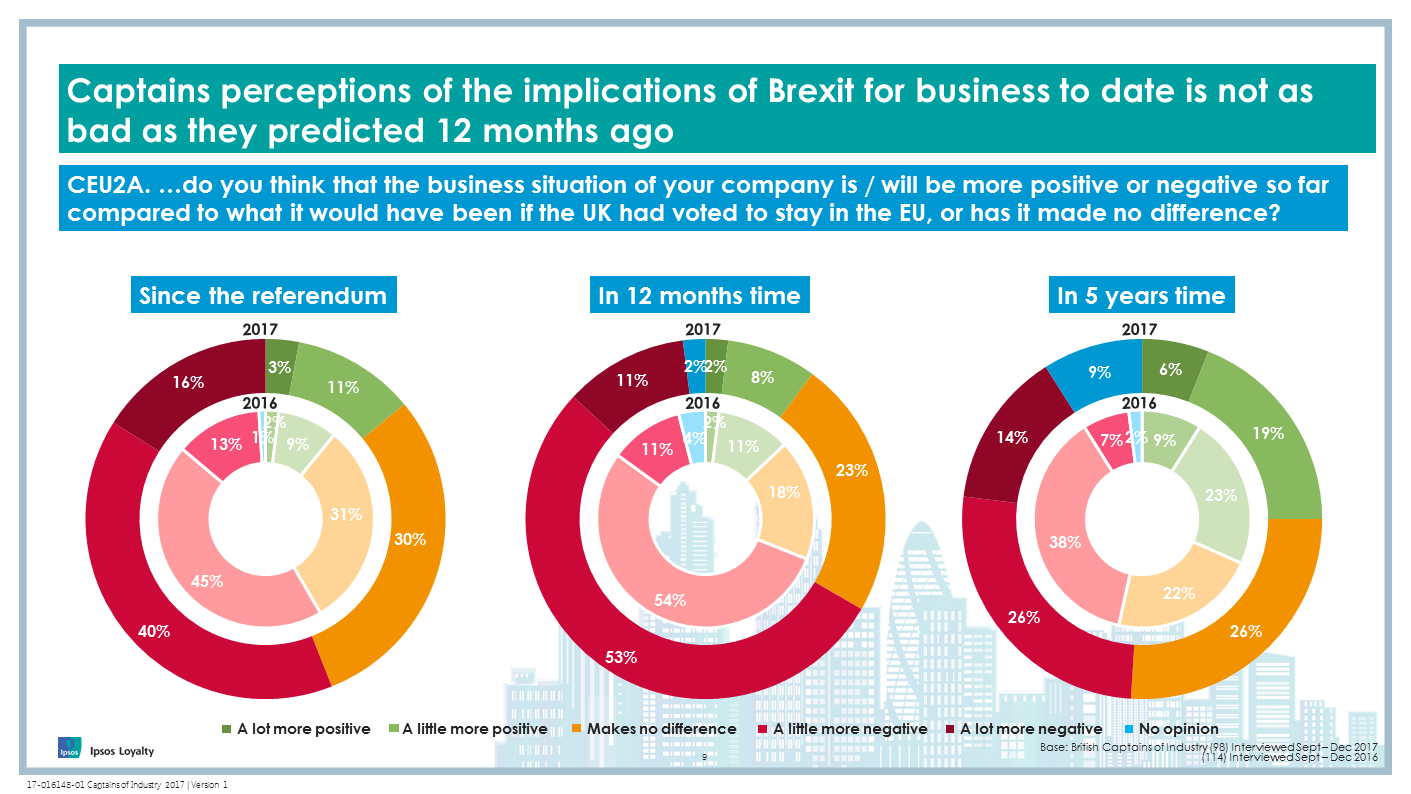 Looking forward, Captains anticipate that the general economic condition of the country will decline over the next 12 months (66%), with 28% expecting it to remain the same and just 6% predicting an improvement.

Captains confidence in economic policy is at the lowest level since the coalition government came to power in 2010.  A third (37%) disagree with the statement that in the long term, this Government’s policies will improve the state of the British economy. London-based Captains are significantly more likely to disagree than Captains located outside of the capital (49% disagree compared to 28%).  This is due to the larger proportion of Financial Services companies in the city.

However, more than half (54%) of business leaders expect the position for their own company to improve over the next 12 months.  This is significantly higher in London than the rest of the country (64% compared to 45%).

"This year’s Captains of Industry report may not make comfortable reading for the Government, with business confidence in economic policy at its lowest level since 2010 and two-thirds of business leaders not feeling confident in the ability of the Government to negotiate a good Brexit deal.

"However, it’s not all bad.  Brexit has not done as much damage to business as the Captains predicted it would 12 months ago, and more than half of business leaders also think that the position of their company will improve in the next year – despite two-thirds thinking the economy generally will decline in the coming year.

"These findings illustrate the need to reassure businesses in the UK and for the Government to win back some confidence from our Captains of Industry, who are currently questioning its ability to pull off a successful Brexit.

"With gender equality never out of the news, 88% of FTSE 500 bosses say they are committed to championing diversity in their workforce, although it is also worth noting that this number includes 89% of the large group of companies that have no women at all on their executive board."

Ipsos conducted 100 interviews with participants from the top 500 companies by turnover and the top 100 by capital employed in the UK. Participants were Chairmen, Chief Executive Officers, Managing Directors/Chief Operating Officers, Financial Directors or other executive board directors. Interviews were primarily carried out face to face (7 were carried out over the telephone) between September and December 2017.