A new ABC News/Ipsos poll finds that half of Americans are experiencing financial hardship due to high gas prices, with one in five reporting “serious” difficulties. Americans blame lots of actors for the current prices including Russian President Putin, oil companies, and President Biden and the Democrats. These pressures potentially explain President Biden’s continued low marks on handling inflation, gas prices, and the economic recovery, even as the public is giving Biden better marks on the pandemic.

This poll also finds that the American public continues to support sanctions on Russia and providing Ukraine with weapons and supplies. However, there is very little public support for measures that may trigger a wider conflict such as a no fly zone or American troops in Ukraine. 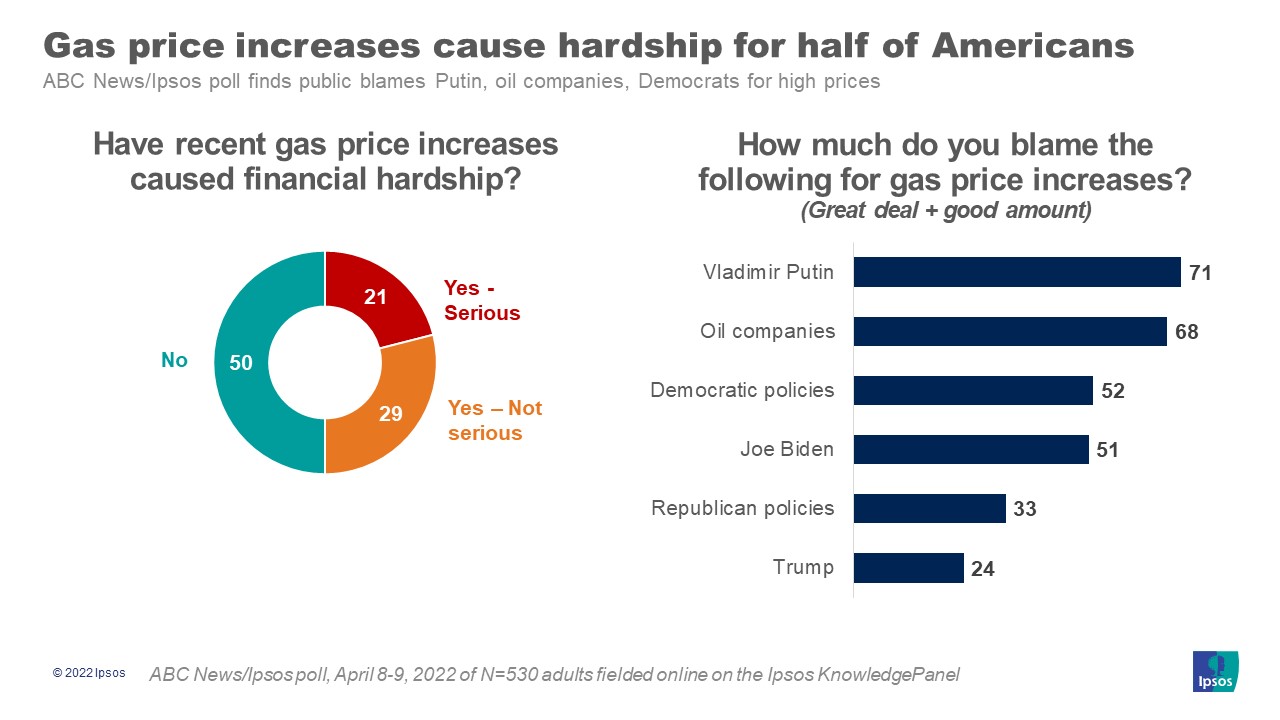 Public approval of Biden’s handling of the coronavirus pandemic has improved over the last month, as the Omicron wave has subsided, but that positive movement has not translated to other aspects of his job performance, which are uniformly underwater.

The American public continues to support Ukraine in the war with Russia, but does not want to see the conflict expand to direct engagements between the U.S. and Russia.

Half of Americans say that recent increases in gas prices have caused financial hardship in their household, and they have plenty of blame to pass around.

This ABC News/Ipsos poll was conducted April 8 to April 9, 2022, by Ipsos using the probability-based KnowledgePanel®. This poll is based on a nationally representative probability sample of 530 adults age 18 or older.

The study was conducted in both English and Spanish. The data were weighted to adjust for gender by age, race/ethnicity, education, Census region, metropolitan status, household income, and party identification. The demographic benchmarks came from 2021 Current Population Survey (CPS) from the US Census Bureau. Party ID benchmarks are from recent ABC News/Washington Post telephone polls. The weighting categories were as follows: