Washington, DC, August 28, 2022 – Less than three months from the midterm elections, a new USA Today/Ipsos poll finds that former President Trump continues to be seen as the head of the Republican party, as a majority of Republican voters[1] believe that he can win the next presidential election and should be the party’s nominee in 2024. In contrast, Democratic voters[2] are less enthusiastic about President Biden, and a slim majority believe he should not run for re-election in 2024. In the wake of the Inflation Reduction Act’s passage, the American public gives the Democratic Party an advantage over the Republican Party on the ability to push their agenda through Washington. However, the GOP holds the advantage on being good for the economy, at a time when inflation/increasing costs are the single most important issue to Americans. 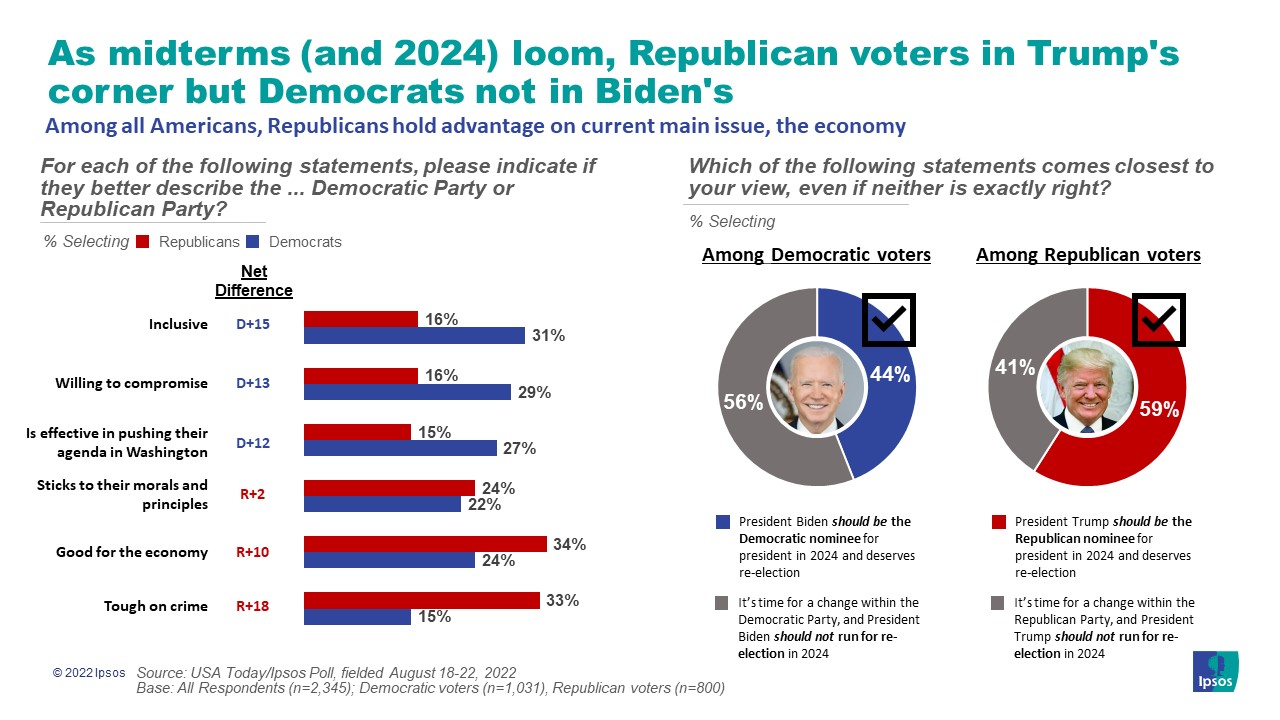 1. For Republican voters, former President Trump continues to be seen as the head of the Republican Party.

2. ​​​​​Despite associating President Biden with important traits, Democratic voters are less supportive of him being the party’s nominee in 2024.

3. Among all Americans, the Democratic Party is perceived as more inclusive and willing to compromise than Republicans. In the immediate aftermath of the Inflation Reduction Act’s passage, they also enjoy an advantage of legislative efficacy in Washington. Republicans, however, take the cake on being better for the economy and tough on crime – cementing their advantage on two major issues for the public right now.

[1] Defined as those who say they vote at least occasionally and when they do, typically vote for Republican candidates

[2] Defined as those who say they vote at least occasionally and when they do, typically vote for Democratic candidates

These are some of the findings of a USA Today/Ipsos poll, conducted between August 18 – 22, 2022. For this survey, a sample of 2,345 adults age 18+ from the continental U.S., Alaska, and Hawaii was interviewed online in English. The sample includes 800 Republican voters, 1,031 Democratic voters, and 514 voters that don’t vote for either party or are non-voters.

Statistical margins of error are not applicable to online non-probability polls. All sample surveys and polls may be subject to other sources of error, including, but not limited to coverage error and measurement error. Where figures do not sum to 100, this is due to the effects of rounding. The precision of Ipsos online polls is measured using a credibility interval. In this case, the poll has a credibility interval of plus or minus 2.5 percentage points for all respondents. Ipsos calculates a design effect (DEFF) for each study based on the variation of the weights, following the formula of Kish (1965). This study had a credibility interval adjusted for design effect of the following (n=2,345, DEFF=1.5, adjusted Confidence Interval=+/-4.0 percentage points).