Several weeks ago I went with my two sons to see the movie Uncut Gems before they went back to college. At the time, I knew little about the film. I ultimately went because of their intense lobbying.

Their pitch: it was an Adam Sandler film that somehow had a 91% Rotten Tomatoes rating. A quick search also showed that Uncut Gems was not a comedy despite starring Sandler. All very interesting. Ok I was in.

I went in with very few expectations but came out surprised. It was a brilliant but disturbing film. Adam Sandler was incredible in a non-comedic role.

So what was the film all about?

Adam Sandler plays Howard Ratner, a NYC diamond district jeweler and gambling addict, who goes from deal to deal, day trading his life away to feed his addiction and pay off loan sharks and pawn brokers. Directed by Josh and Bernie Safdie, Uncut Gems takes on a frenetic pace as you watch Howard spin out of control.

Most interesting to me was how Howard’s addiction affects the people close to him—his wife, children, girlfriend, relatives, and business partners. He was charming and intrepid while at the same dysfunctional and ultimately destructive to those in his social milieu.

The film made me think about our social proximity to addiction. Thinking of all the people in Howard’s network of friends and families who were caught up, one way or another, by Howard’s addiction made me wonder how many other Americans are similarly close to someone struggling with addiction.

This line of thinking led me to two questions: (1) how pervasive is addiction in America? And (2) how many of us know someone with an addiction?

Trying to accurately gauge how many people have an addiction in the United States immediately poses challenges. There are many definitional difficulties when we try to pinpoint what addiction is exactly.

NIH has a simple definition for it:

“Addiction is defined as a chronic, relapsing disorder characterized by compulsive drug seeking, continued use despite harmful consequences, and long-lasting changes in the brain. It is considered both a complex brain disorder and a mental illness. Addiction is the most severe form of a full spectrum of substance use disorders, and is a medical illness caused by repeated misuse of a substance or substances.”

The medical community generally has moved towards the point of view that addiction or substance use disorder is a disease of the brain (though questions remain about this). This view is supported when addiction is viewed both as a mental health issue and a function of impaired neurological processes in the brain as it develops an increasing tolerance for and dependence on certain substances.

But addiction is vastly complex. Many other factors influence whether a given person will develop an addiction. These could be preexisting mental health issues, traumatic experiences, or a host of other reasons. Addiction often goes unresolved unless an effort is made to address these other, co-related root causes, which can be thorny to untangle in their own right.

In Howard’s case, his gambling seemed to be connected at least in part to his optimism or mania, an intrinsic part of his personality. Perpetually convinced that he was finally going to get his big break, he kept entrenching himself further until there was no way out.

Going back to the definitional challenges, it’s worth remembering that until relatively recently, Howard’s gambling addiction in Uncut Gems wouldn’t even technically have been considered a “substance use addiction,” as alcohol or opioid addiction are. Instead pathological gambling was seen as an impulse control disorder.[i]

To get a sense of what proportion of the population suffers from addiction, we turned to the Substance Abuse and Mental Health Services Administration’s (SAMHSA) National Survey on Drug Use and Health (NSDUH) and the National Council on Problem Gambling (NCPG).

Both sources show – as we know, given the fact that there is a much-discussed opioid crisis occurring – that millions of Americans struggle with addiction each year.

But what about social proximity to addiction? How many of us know someone who is struggling with addiction?

To get at Americans’ relative social proximity to addiction, we ran a survey asking the public whether they have anyone in their family or social circles suffering from addiction, across a host of addiction or substance use types. As an initial guide, I utilized a social proximity question developed during my time in Brazil, to better understand how social milieu influences mental health as well as crime.

It is clear that a solid majority of Americans have some direct social connection to addiction, either through a friend, family member, acquaintance, or people they encounter in their daily lives. When asked, 56% of respondents said that they know someone who is struggling with addiction. We as Americans are closely connected to addiction. 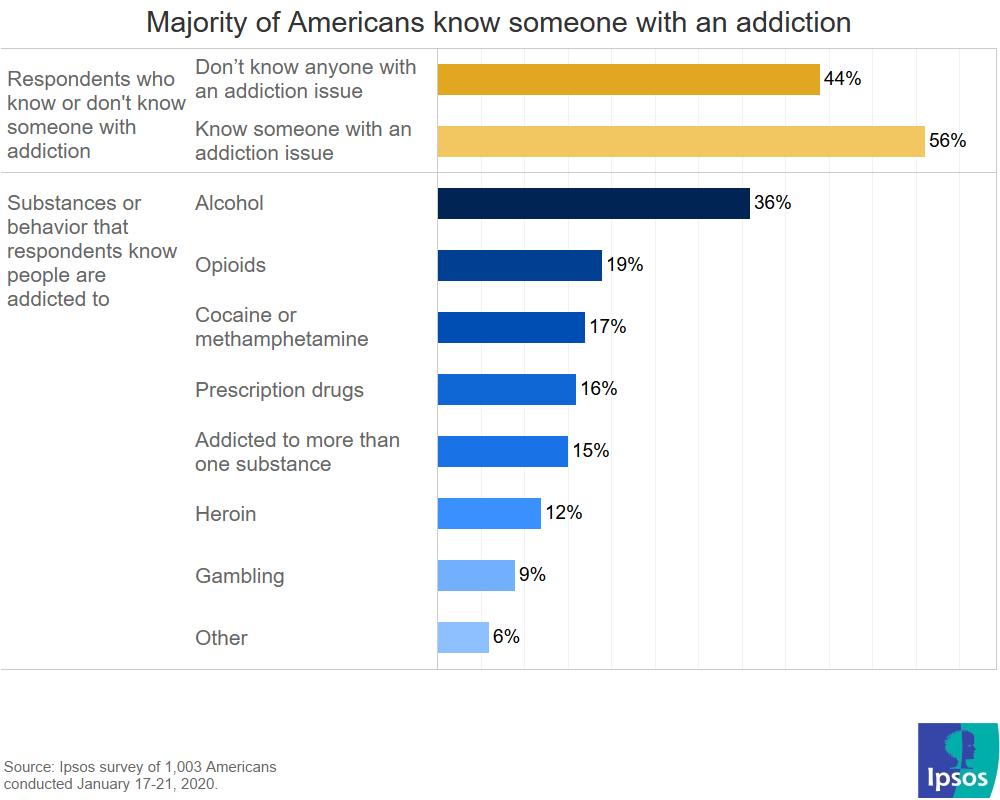 One of the most pernicious aspects of addiction is the stigma surrounding it. Society can be harsh in condemning addicts, saying that their failure to overcome addiction comes down to a lack of willpower. We see a similar pattern play out over and over again in Uncut Gems, as other characters ridicule and physically attack Howard.

That said, public opinion does seem to be shifting away somewhat from that particularly rigid mindset. Research shows that Americans increasingly view addiction as a significant problem. In our recent Ipsos poll, 48% agreed that “addiction is a choice and it is up to the addict to solve their problems.” However, the majority of respondents (78%) also agree that “addiction is a disease and warrants support and treatment.”

Put differently, this suggests that close to half of the American public holds two opposing views about addiction at the same time, believing that there is some personal responsibility on the part of the individual struggling with addiction, while simultaneously feeling that external support for the disease is warranted.

I wish that we had made this a force choice question to tease out America’s relative belief between disease versus the fault of the individual. Perhaps we can do that in a future poll.

The tragedy of Uncut Gems wasn’t only Howard’s. As he becomes increasingly obsessed with the biggest bet of his life, his family members, friends and associates get pulled into the maelstrom with him.

For me, Uncut Gem’s most chilling message is that addiction isn’t just about the individual but about the collective.  I would even argue (with the data we have here) that the social stigma around it is fundamentally linked to the unintended negative impact that addicts can have on the people within their social reach. This was Howard’s story in a nutshell.