These are some of the findings of a survey of more than 22,000 adults conducted on Ipsos’ Global Advisor online platform between September 24 and October 8, 2021.

The proportion of citizens agreeing they would have more respect for global institutions or agreements if democratic nations had more influence over them than authoritarian nations increased since last year in 19 of the 28 countries surveyed, with gains of ten points or more in 11 of them. Countries showing the largest increases in agreement from last year are Sweden (+33 points to 80%), the Netherlands (+29 to 73%), Belgium (+28 to 80%), South Korea (+27 to 85%), and Germany (+26 to 76%). The three countries showing decreases from last year are Australia (-7 to 76%), Canada (-7 to 75%), and Malaysia (-7 to 84%). All other countries show changes of no more than +/- 3 points.

Greater respect for democratic nation-led-institutions and agreements is expressed by a large majority of adults in every country surveyed: from 86% in India to 65% in Japan, including 75% in Canada and 71% in the United States, as well as 83% in China, 78% in Saudi Arabia, 76% in Turkey, and 72% in Russia.

Satisfaction with current institutions, but a desire for something new

A global country average of 58% agree the world’s current international organizations have done a good job dealing with challenges such as the global pandemic, climate change, and international peace. However, satisfaction with existing organizations varies widely across countries. It is expressed by at least three in four adults surveyed in India, Malaysia, and China, but fewer than half in France, Japan, Italy, Turkey, Belgium, Germany, Hungary, and Russia.

There is a stronger desire for something new with a global country average of 83% endorsing the view that the world needs new international agreements and institutions led by democratic countries – from 71% in the United States to 90% in Peru. 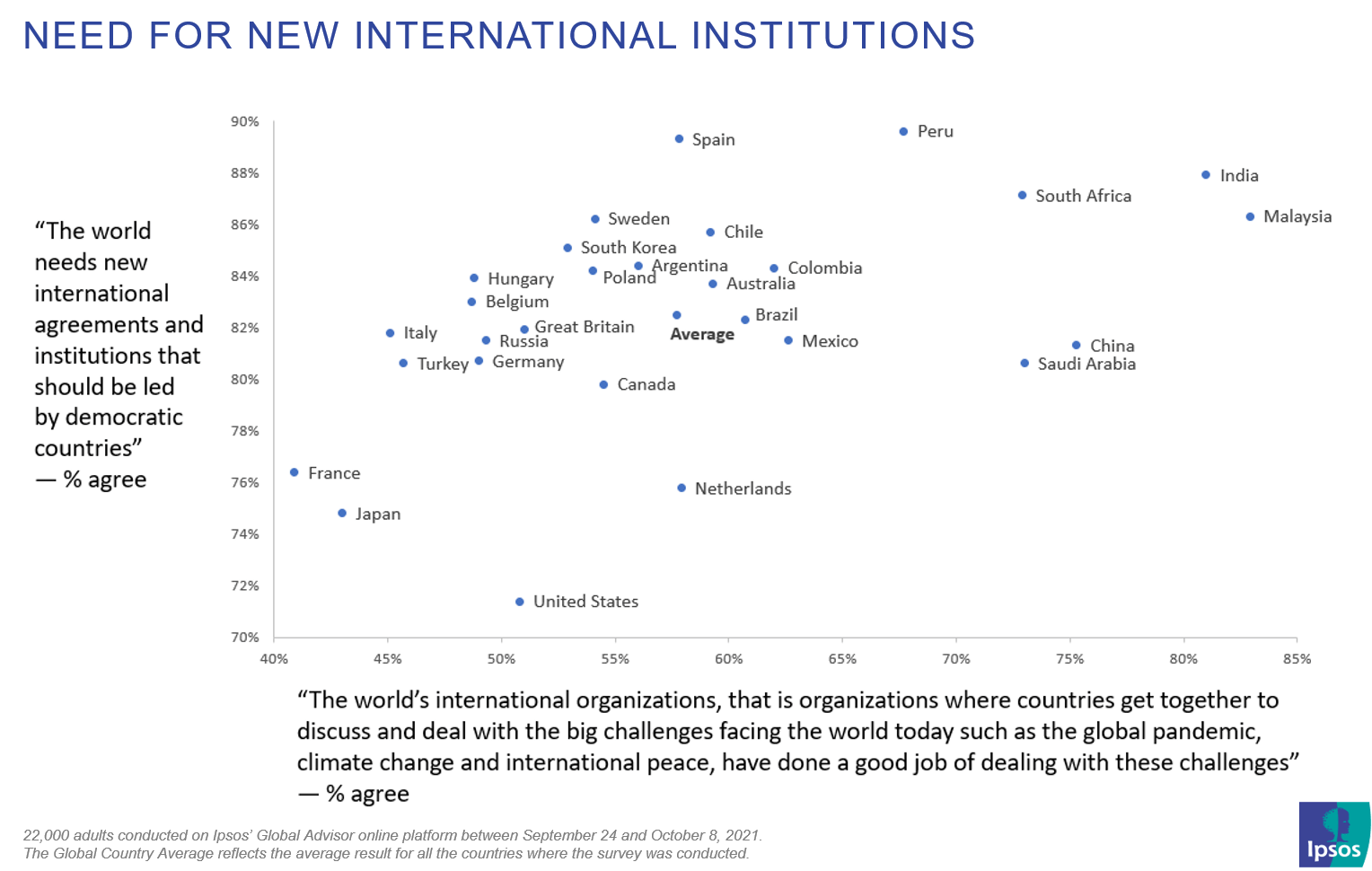 However, if new international institutions and agreements were created to deal with big challenges facing the world today, the countries that would be least expected to comply with them are perceived are, in order, China (cited by a global country average of 32%), the U.S. (24%), Russia (21%), Afghanistan (12%), North Korea (9%), and Iran (8%). No other country was named by more than an average of 5%.

These are the results of a 28-market survey conducted by Ipsos on its Global Advisor online platform. Ipsos interviewed a total of 22,016 adults aged 18-74 in the United States, Canada, Malaysia, South Africa, and Turkey, and adults aged 16-74 in 23 other markets between Friday, September 24 and Friday, October 8, 2021.