A recent Ipsos survey conducted in 28 countries reveals that more global citizens now perceive a health epidemic (78%, +27 points since last year) as the top threat over the next twelve months, surpassing the threat of being hacked for fraudulent or espionage purposes (74%, -1), which has been atop the list for the last number of years.

The research in its 11th year, conducted exclusively for the Halifax International Security Forum, compared eight possible threat scenarios and how real the threat of each occurring in the next 12 months is. The threat scenarios included: threat of a major health epidemic, major natural disaster, a terrorist attack, violent conflict between ethnic or minority groups, the country being involved in armed conflict abroad, nuclear or biological attack, personal and family safety and cyber-attacks or hacking.

Comparatively, the third most concerning globally is the threat of nuclear, biological and chemical attack taking place somewhere in the world, where two-thirds (67%) of people believe in its likelihood to be a real threat in the next 12 months. Next is the threat of a major natural disaster (65%), followed by a tie between violent conflict breaking out between ethnic or minority groups in their country and personal safety and security for themselves and their family (61%, respectively). Comparatively, close to six in ten (58%) people consider a terrorist attack taking place in their country a real threat while four in ten (43%) people consider their country going into armed conflict with another nation a real threat.

Despite being in the midst of a global epidemic right now, and while the threat of a an epidemic breaking out in their own country is perceived as a real threat by 78% of global citizens (up 27 points since last year), residents of some countries are much less likely than others to perceive an epidemic as a real threat. Those in Turkey (91%), Great Britain (88%), Spain (88%), the United States (87%) and Australia (87%) are most likely, while those in Saudi Arabia (62%), Sweden (63%), Poland (69%), Germany (70%) and Japan (70%) are less likely.

Perennially atop the list of threats, being hacked has slipped to number two given the current context. Three quarters (74%) believe that being hacked for fraudulent or espionage purposes is a real threat in the next year, with residents of South Africa (89%), Turkey (84%), Australia (83%), the United States (81%), Great Britain (80%) and Colombia (80%) being most concerned about this possibility. Residents of Hungary (51%), Italy (62%), Poland (63%), the Netherlands (63%) and Japan (64%) appear considerably less concerned about hacking being a real threat in the coming year.

Confidence in government and its agencies

While most global citizens believe the threat of epidemic of hacking is real, they are not convinced that the appropriate levels of security and protection could be provided by their own governments or agencies in response to such a threat. In fact, just 53% are confident that their government could respond effectively to a major health epidemic breaking out in their country, and with an increase of just 1 percentage point since last year, it appears that the current response to COVID-19 isn’t instilling greater degrees of confidence. Confidence is highest in India (72%), Malaysia (70%), the Netherlands (67%), Australia (66%) and Sweden (64%), and lowest in France (32%), Belgium (34%), Chile (44%), Mexico (45%), Great Britain (45%) and Peru (45%).

The chart below outlines the eight threats tested, the proportion of global citizens who believe it presents a real threat in the next year, and the proportion who is confident that their government and its agencies can protect them or respond effectively to these threats. 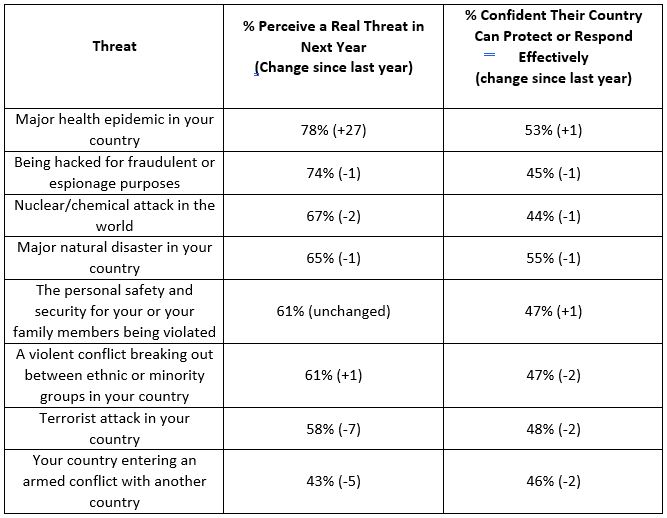 The two areas with the biggest gaps in perceived threat and ability to protect or respond to that threat is in hacking and a health epidemic. In other words, global citizens feel nervous that their governments are prepared to tackle the two largest threats they perceive to be real in the next year.