In just a matter of a couple of weeks – the world is starting to look like a vastly different place.

Something that may have seemed like a “foreign” problem is now on your shores and perhaps even hitting close to home as rising coronavirus infections lead to school closures, mandates to work from home, travel restrictions, cancellation of major sports and entertainment events to empty store shelves and streets.

Added to that, wild swings on the stock markets with central banks and governments stepping in to prevent a full-blown financial crisis have not only rattled companies and investors, but also left consumers wondering how this pandemic is going to affect them.

In a global survey of 10 countries just over two weeks ago, there was a significant increase in the number of people who believed the outbreak would have a personal financial impact on them and their family compared to a previous poll. In fact, there were double-digit increases in all countries except one. 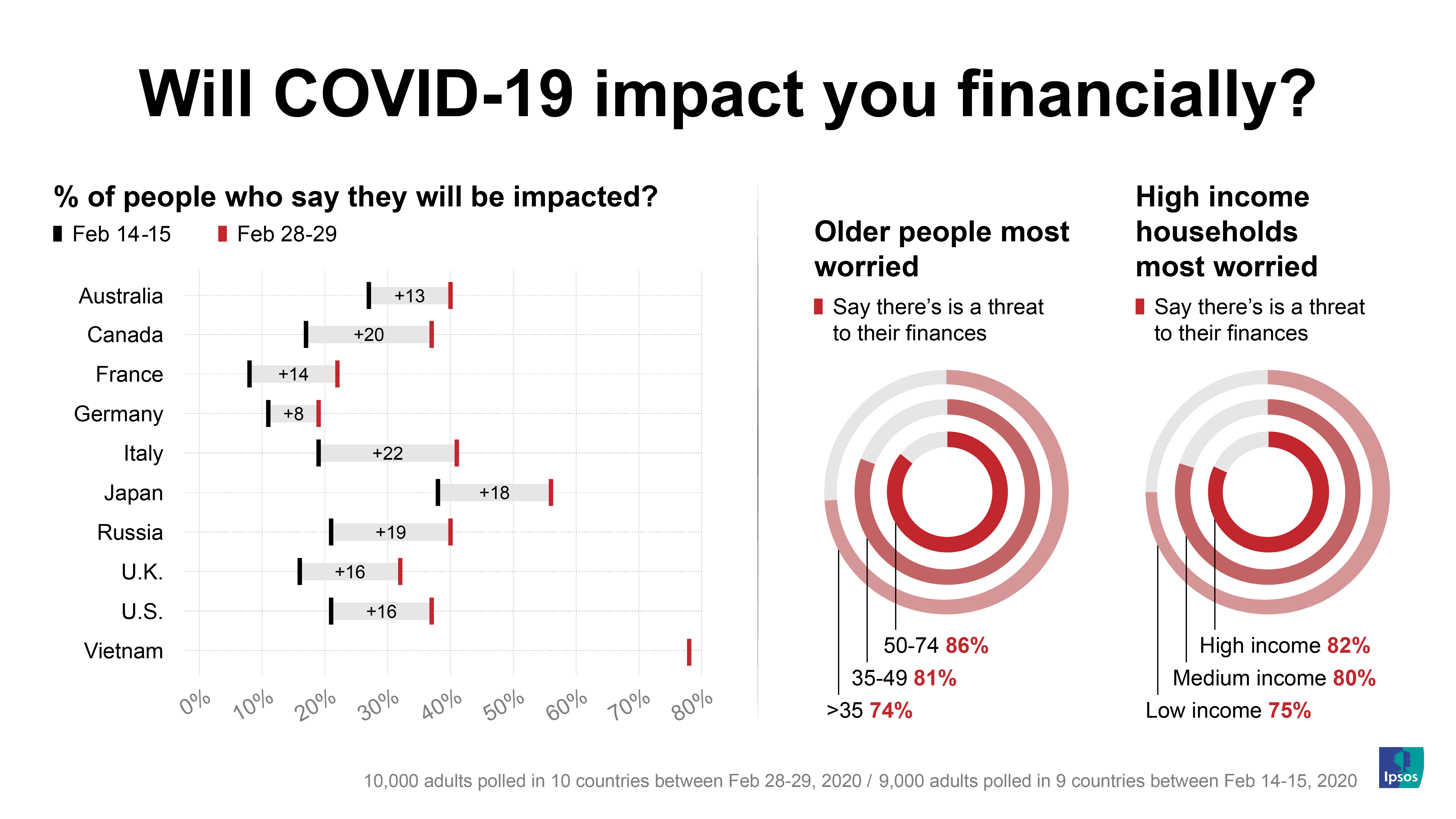 If the latest economic data is any indication of the impact from the coronavirus outbreak, the worse may be yet to come, according to economists.

Consumer confidence data on Friday from the world’s largest economy – the U.S. – fell five points to 95.9 from 101 in February, which was less than expected, but indicated worsening conditions, because the University of Michigan’s future expectations index declined more steeply. Data expected this week like employment figures, consumer prices, and retail sales from around the world are expected to give a clearer picture of what’s happening with the economy.

But Royce Mendes, Senior Economist at CIBC Capital Markets, said social distancing – consumers who are trying to avoid contact with other people because of the outbreak – could end up seeing households spend significantly less in the months to come.

“Since my spending is essentially your income and your spending my income, that sort of environment could lead to job losses, and a much greater likelihood of recession,” said Mendes, whose team has been reducing their global economic growth forecasts in real-time, but he admits it’s been like trying to hit a moving target with all the news flow.

“Given how fluid the situation is, it’s difficult to have a lot of confidence in any forecast, but the risks of a recession are very high at the moment.”

In a Bloomberg survey of economists polled last week, the chance of a recession in the U.S. economy in the next 12 months was at 45% – the highest odds since February 2009 – the global financial crisis.

“Given the wave of cancellations and shutdowns, we look for no growth in the first quarter, a deep drop in the second quarter, and then a firmer recovery in the second half of the year,” said Porter.

“Inflation has been chopped further by the slide in oil,” he added, saying commodity-driven economies like Canada will see growth fall to zero, because of the plunge in oil prices.

The price for benchmark U.S. oil – West Texas Intermediate – has fallen more than 55% from a peak this year in January of around US$64 a barrel to the around $28. Similarly, Brent Crude, traded in the U.K, has fallen almost by the same amount.

So, while it may feel like you’re getting a deal at the pumps when filling up your car, the big drop in oil prices – a bellwether on the state of the global economy - is wiping out billions of dollars in market value from energy producers globally – sparking speculation of bankruptcies and mergers, which will trickle through to other parts of the economy.

Meanwhile, Krishen Rangasamy, Senior Economist at National Bank of Canada, said the stock market plunge will hurt consumer confidence and weigh on consumption growth, but there will be support from fiscal stimulus such as tax cuts from the government.

“Central bank easing will help confidence although, given lags involved with monetary policy, positive impacts on growth are likely to be felt later in the year and mostly in 2021,” said Rangasamy.

“We’re likely to see fiscal stimulus as well or else the slowdown will likely be deeper and last longer.”

One of most closely watched global benchmark indices – the Dow Jones Industrial Average – has fallen more than 30% from a peak this year in mid-February into bear market territory, ending an 11-year bull run for the U.S stock market. The broader S&P 500 Index has lost almost similar amount since mid-February, while Japan’s Nikkei 225 – Asia’s biggest stock market – has lost more than 29% from its highest point this year in January.

The wild fluctuations last week forced the U.S. Federal Reserve to step in to an inject $1.5 trillion into the stock markets by making short-term loans available on Wall Street and buying U.S. government bonds – Treasuries - in a bid to stabilize the market after already making an emergency 50-basis point cut to interest rates the week before. The Bank of England also cut its benchmark rate and announced economic stimulus, as did the Bank of Canada among others.

But relief from measures by central banks were short-lived on the markets with more plunges until Friday when U.S President Donald Trump declared a national state of emergency and promised a coronavirus aid package.

Mendes said central banks lack the ability to fully offset the effects of a global economic slowdown from the coronavirus pandemic, because their tools aren’t well-suited to deal with this type of a shock.

“Fiscal stimulus will need to play a major role… Fiscal policymakers who have the capacity shouldn’t be shy to use that firepower,” said Mendes.

“One of the great mistakes early on in the recovery from the financial crisis was the move in some parts of the world towards austerity measures. Research has shown that austerity or even inadequate stimulus packages following the 2008 crisis led to longer periods of high unemployment.”

With yields on government debt so low, markets are telling policymakers there is ample room – and need – to provide stimulus, added Mendes.

But Rangasamy said the main risk from a slowdown in growth is that it triggers a financial crisis as we start to see uncontrolled defaults on debt – which causes the financial sector to freeze.

“This is not our base case scenario at this point, but we’ll be watching financial developments closely,” said Rangasamy.

The Fed responded to the threat of loan defaults again on Sunday by cutting interest rates to near-zero in order to make borrowing cheaper for businesses and consumers. It also said it would buy huge amounts of government and mortgage-backed debt in a bid to boost the market – similar to moves made in 2008 during the last recession.