“I resign as president of the Republic with immediate effect. Even though I disagree with the decision of the leadership of my organisation.” These words of ex-president Jacob Zuma brought to end nine difficult years in the short history of the South African democracy.

When looking at the perceptions of South Africans over this period (measured form May 2009 to November 2017), there is a clear trend of declining optimism and dwindling appreciation of the work undertaken by government in different areas of delivery. From the graphs below, it is evident that the scores in November last year were especially low. The Pulse of the People™ studies are carried twice a year on the Ipsos Khayabus project, interviewing a representative sample of at least 3,500 adult South Africans.

Would you say that the country is going in the right direction or the wrong direction? 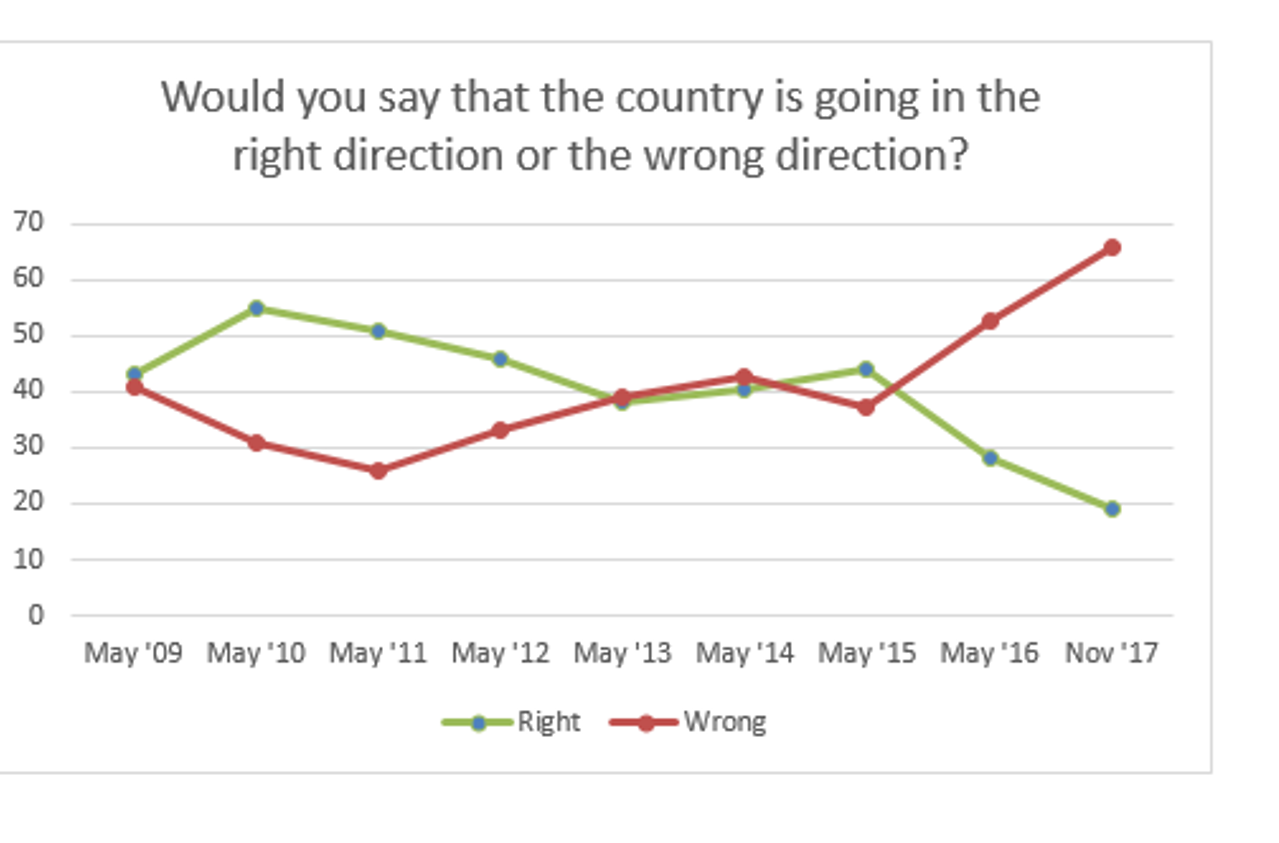 How well do you think President Jacob Zuma is doing his job?

The ratings of how well President Zuma was doing his job have declined slowly since May 2010 where almost 70% of the population rated his performance favourably. The greatest decline occurred between May 2015 and May 2016 with the score decreasing by 15 percentage points. In November 2017 only one quarter of South Africans measured President Zuma as doing his job well or fairly well. 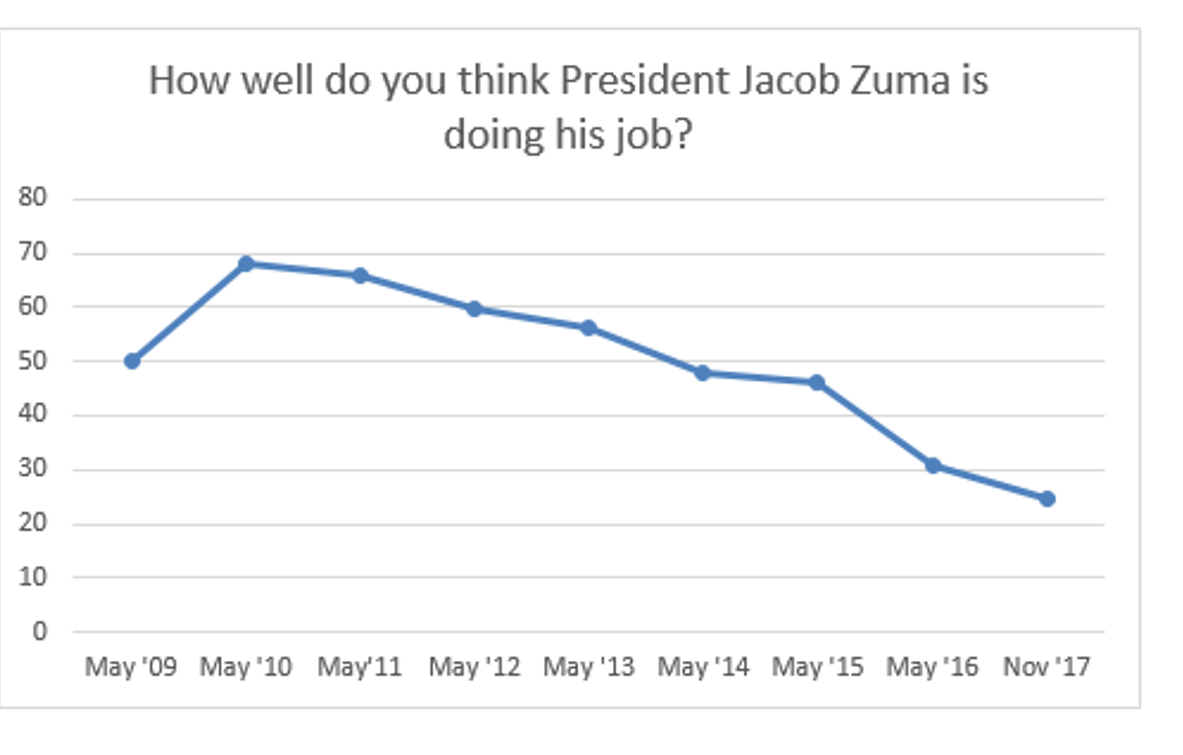 How well would you say the government is handling fighting corruption in government? 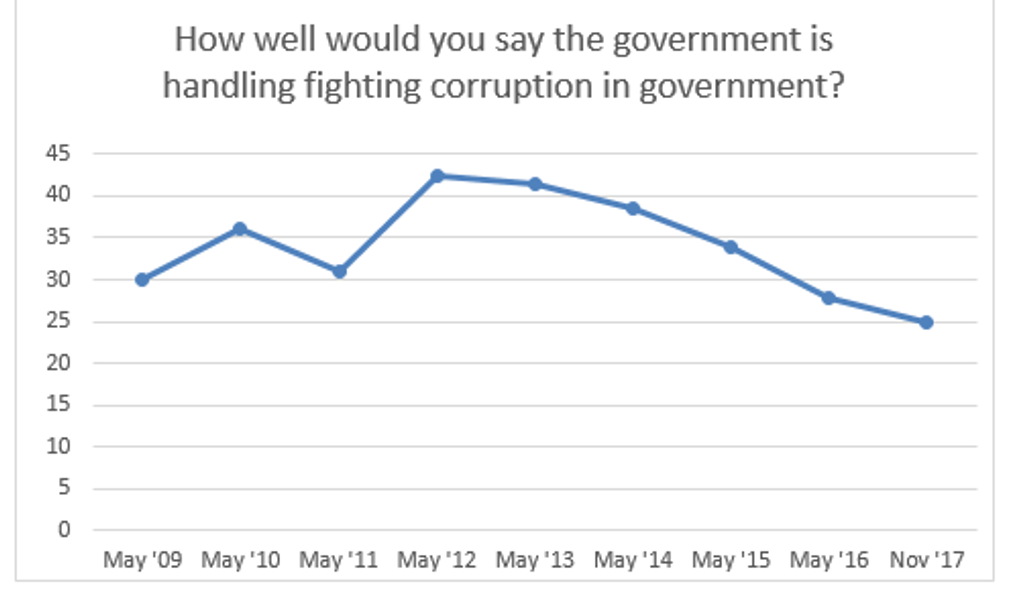 How well would you say the government is managing the economy?

A lot of work has to be done to restore trust in the government’s ability to handle issues of national concern. But, a similar downward trend is evident in the country’s perception as to how the government was handling the management of the economy. As can be seen on the graph below, there were short period of slightly more optimism. However, the overall performance of the government on this issue was also never rated above 50% - and the prevailing sentiment is negative. 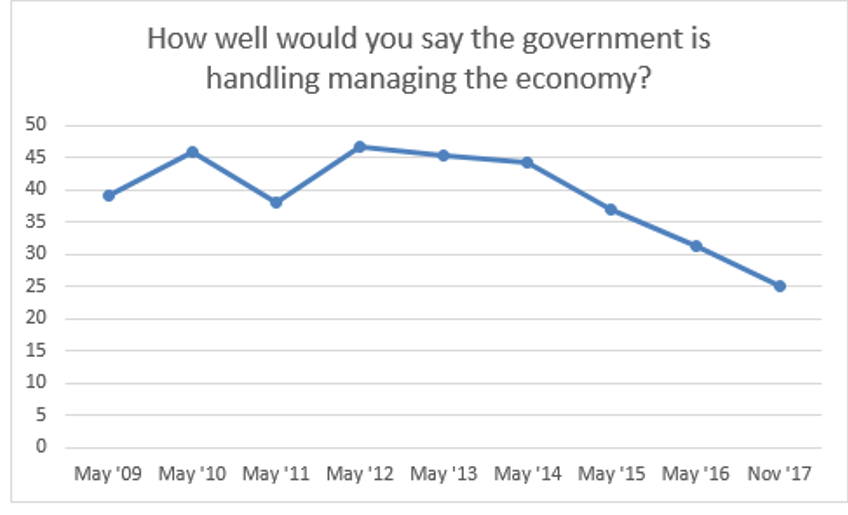 How well would you say the government is handling the delivery of basic services such as water and electricity?

The data again tells the same story of declining satisfaction when it comes to the government’s delivery of basic services. The general trend is a decline in positive evaluations - however, the sentiment is slightly more stable than that of the other issues. The November 2017 data shows that just above four in ten South Africans believe that the government is performing “very well” or “fairly well” delivering basic services. 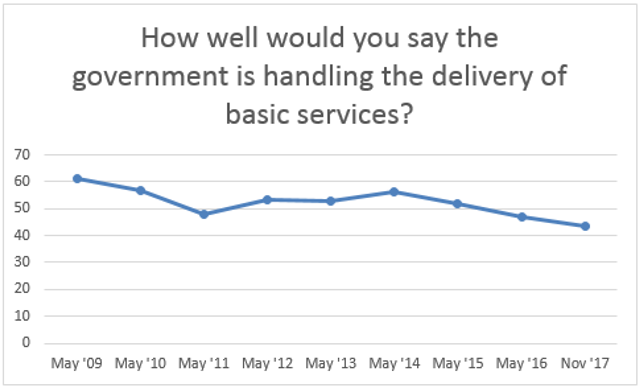 Fieldwork for this study was conducted from 2 November to 7 December 2017.  A total of 3,562 South Africans, 15 years and older, were interviewed. They were randomly selected and interviewed face-to-face in their homes and home languages. Interviews were conducted all over the country, from metropolitan areas to deep rural areas. This methodology ensured that the results are representative of the views of the universe and that findings can be weighted and projected to the universe – i.e. South Africans 15 years and older.

All sample surveys are subject to a margin of error, determined by sample size, sampling methodology and response rate. The sample error for this sample at a 95% confidence level is a maximum of 1.63%.