Well, it looked promising, but after some optimistic summer months for many countries and the international average, the Economic Pulse enters the Fall season with a slump taking measures back to March, 2015. And the hurt is pretty much everywhere and with all three assessments losing ground. Especially notable is the downward outlook for the future local assessment which, in aggregate, is headed downward for the third month in the row.

When asked to assess the current economic situation in their country, only 39% of global citizens rate it as “good”—with the aggregate score down two points since last month but falling back to where things were in March.. The biggest loser in this assessment category is Brazil. With their currency hitting an all-time low, only 6% of Brazilians assess their national economic situation as good—t he lowest score for that country since the inception of the Economic Pulse in 2010.

When asked to assess the economy in their local area, three in 10 (29%) global citizens rate it as “strong”, down one point since last sounding.

The outlook for the future local economy is down a point: only two in 10 (22%) global citizens expect the economy in their local area to be “stronger” in the next six months. This is the lowest average score in this category since October 2012. 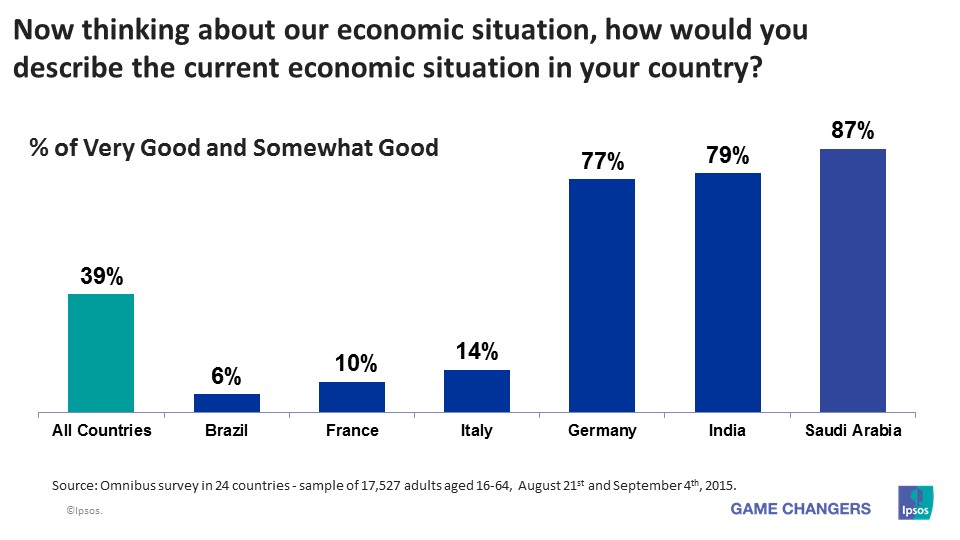 When asked to assess their local economy, 29% agree the state of the current economy in their local area is ‘good,’ on the global aggregate level. The local economic assessment is down two points since last sounding.

The future outlook is down one point once again, as 22% of global citizens expect their local economy will be stronger six months from now.