The year 2020 has seen a precipitous drop in the proportion of global citizens who believe that China will have a positive influence on global affairs in the next decade, according to the 11th year of polling by Ipsos for the Halifax International Security Forum.

The survey of over 21,000 citizens in 28 countries around the world reveals that just 42% of global citizens say that China will have an overall positive influence, down 11 points since last year. Throughout this past decade, a growing proportion believed China would have a positive influence, peaking at 58% in 2017. However, in 2018 and 2019, only 53% believed the same, and now only 42% think China’s influence will be positive in the next decade.

China isn’t the only country whose scores have dropped considerably in the last number of years. Back in 2016, under an Obama administration, 64% believed that the United States would have a positive influence in world affairs, which dropped to 55% in 2017 after the election of Donald Trump as President, and has deteriorated further to 50% in 2020.

There is no uniformity in opinion among respondents of various countries, however, with some firmly believing in another country’s positive influence, while others are equally skeptical. 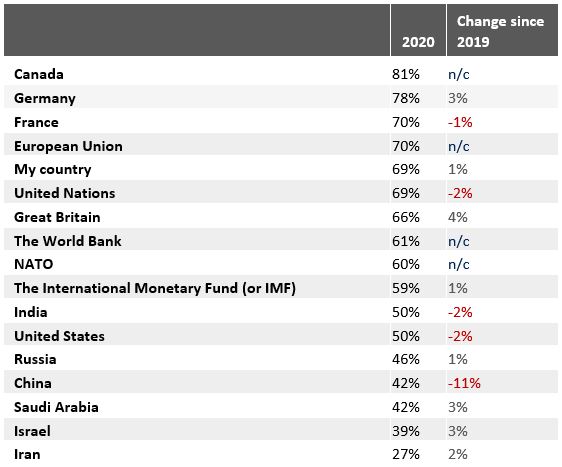 These are the findings of an Ipsos Global Advisor survey conducted between August 21st and September 4th, 2020. The survey instrument is conducted monthly in 28 countries around the world via the Ipsos Online Panel system. The countries reporting herein are Argentina, Australia, Belgium, Brazil, Canada, Chile, China, Colombia, France, Great Britain, Germany, Hungary, India, Israel, Italy, Japan, Malaysia, Mexico, Peru, Poland, Russia, Saudi Arabia, South Africa, South Korea, Spain, Sweden, Turkey and the United States of America. For the results of the survey presented herein, an international sample of 21,104 adults aged 18-74 in the US and Canada, and age 16-74 in all other countries, were interviewed.