Here are the 10 key points from our new Flair Italy

1. More than half of all households are facing economic adversity

Times were troubled in 2021 and 60% of Italians look back and state that it was a bad year for their families. 52% of them say that their economic circumstances became more precarious, and things look set to remain tough in the coming period.

2. Tensions simmering below the surface: a new wave of uprisings and civil disobedience

68% of Italians sense significant social tension in the country. 65% of them think that it is quite or very likely that new forms of protest “against wealthy and privileged people” will take place in the near future. 35% of Italians believe it will be necessary “to take to the streets in order to change things”.

3. The impact of COVID on people and their health: tiredness, excess weight, sleeplessness, stress and anxiety

The pandemic experience has had a significant impact on people’s bodies, fitness, and weight. 38% of Italians reported a fall in fitness levels and 36% of them complained of problems with excess weight. And the pandemic has adversely affected the sleep of 34% of Italians and led to increased stress and anxiety for 26% of them.

4. Increasing eagerness to be eco-friendly

For 72% of Italians, it is essential to join the fight against climate change together with efforts to defend communities. For them, the green transition will be a success if it improves people’s quality of life (65%), produces new jobs (40%), creates new businesses (20%) and supports growth in communities (19%).

5. Immunity and community, as nostalgic pastiche loses its way

80% of Italians feel an urgent need for a greater sense of community today. 49% say that they would like to live in communities made up of people who are similar to them in terms of culture, traditions, language and religion, with no foreigners. In contrast, 51% of them reject ambitions of this kind in favour of more open communities.

6. Generation Z: disengaged and withdrawn, but keen to change the world

As they come through the pandemic, young people are feeling more reflective (41%), disheartened (41%) and fragile (31%). At the same time, this generation does not want to give up. They feel twice as brave as their parents (14% vs. 6%) and – most significantly – they want to play their part in changing the world (74%).

7. The complex but inescapable matter of a falling birth rate

70% of Italians believe that the issue has an important part to play in the future of their country. 62% of them think it is necessary to develop a system in which people’s taxes decrease as the number of children increases. In addition, 67% of people are in favour of substantial new tax cuts for businesses that hire women.

Higher inflation and the dynamics of the post-pandemic market are bringing about polarised choices. People are increasingly looking towards either low- or high-priced items, to the detriment of products in the middle of the range.

9. Shifting identities and consumers that tell their own stories

The value of simple practical things is one of the key factors behind product selection (52%), but second, as a purchasing driver, is the search for products which are able to tell stories about the consumers who buy them (36%).

10. Renewed exuberance, with hopes, fears and… a desire for more carefree moments

71% of Italians feel ready to do more to bring about change. 24% of them feel the need to be more carefree and 27% are seeking out new experiences. This revitalised outlook is mostly found among men (56%) and the middle classes (61%), whereas the working classes appear to be more fragile and stagnant. 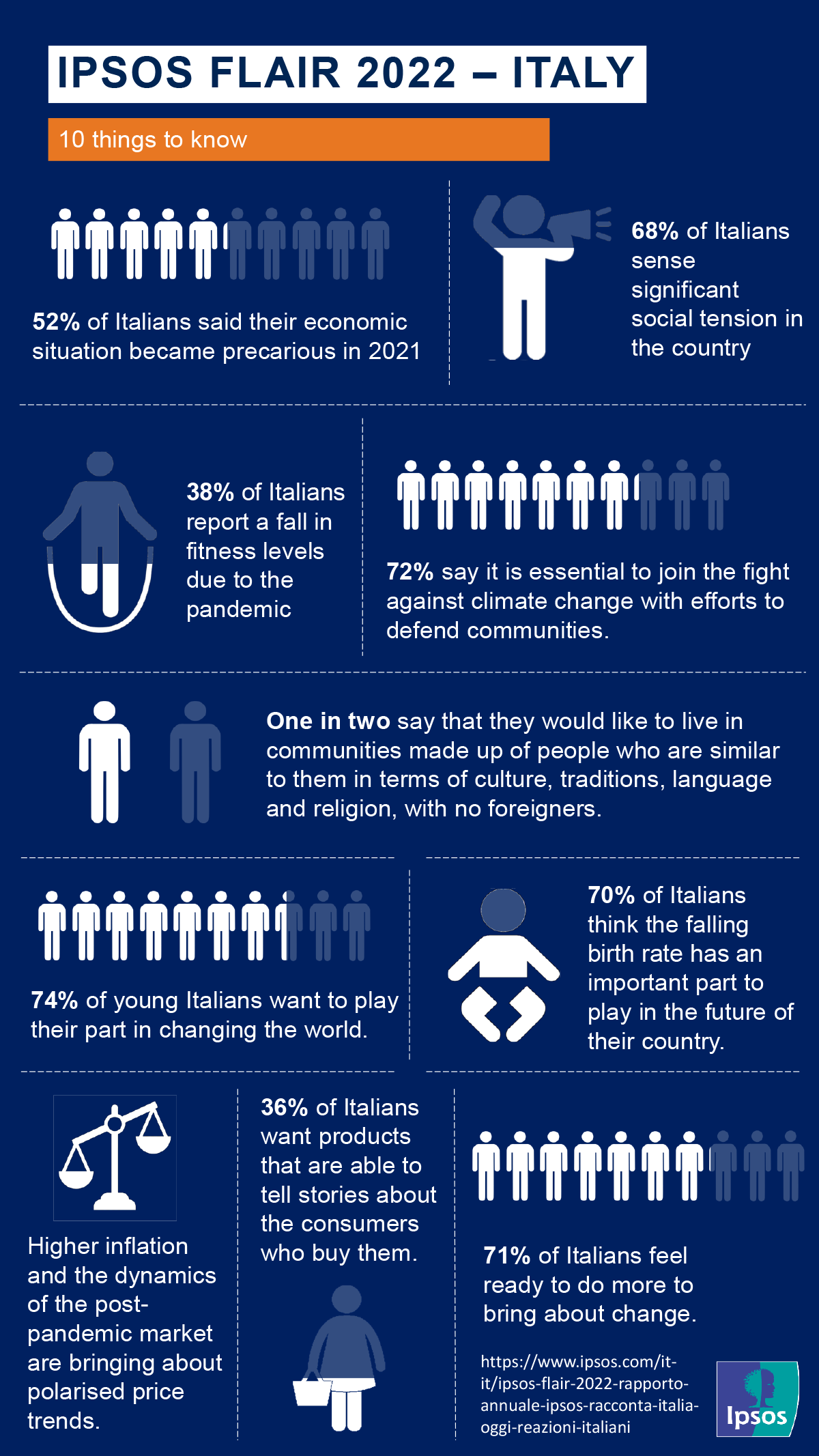