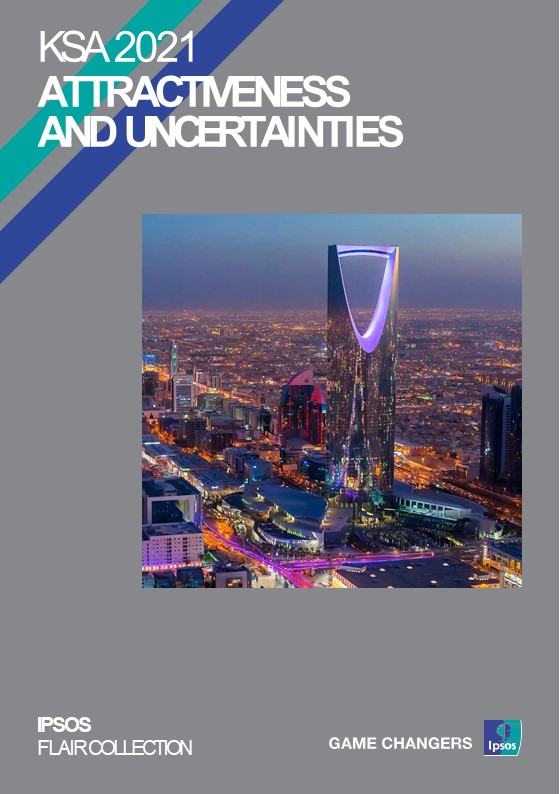 Flair Saudi Arabia 2021 integrates the analysis of trends and all insights needed in order to understand the country at a specific time. It aims at providing insights and understanding of the society with an original perspective from experts.

2. Saudis are still very young: 40% of the population is under 25, including 49% of the Saudi nationals.

3. As a consequence of this young population, social media’s penetration is extremely high: 72% of Saudis are active social media users. Saudi Arabia is said to have the largest social media presence in the world. With 40.2 million mobile subscribers, mobile penetration stands at a record 116% of the total population.

5. Women’s participation in the workforce is increasing: the ratio of female to male labour force participation rate (modeled ILO estimate) in Saudi Arabia was reported at 28.29 % in 2020.

6. An ambitious Vision 2030 strategy aims to diversify the economy and reduce its dependency on oil exports. The government has approached investors about expanding the role of the private sector in healthcare, education and tourism. According to the preliminary estimates, the Oil Sector’s output contracted by 4.6%, in the first quarter of 2020, while the Non-Oil Sector recorded a positive growth rate of 1.6%. Within the Non-Oil Sector, the Private Sector grew by 1.4% and the Government Sector by 1.9%.

7. To boost its transition from an oil economy to a tourist economy, the government introduced In September 2019 a new e-visa program, which allows visitors from 49 countries to travel to the Kingdom either by applying ahead of time or upon arrival. Ipsos data shows that Saudis are largely confident that Saudi Arabia provides the necessary level of entertainment that will appeal to tourists’ expectations (70%) and that their country’s infrastructure has the ability to handle a large number of tourists (66%).

8. The majority are thus supportive of the government’s new infrastructure plans. They foresee new, affordable homes, new roads, and new railway lines, and more easy transportation across the country.

9.Coronavirus has also been an accelerator of trends in mobility, home, health, and demography. The majority say that they will either make small permanent changes in their lives (39%) or change many things about the way that they lived before lockdown (44%).

10. Obesity is Saudi Arabia’s number 1 public health concern (a 2016 research study finds prevalence of overweight and obesity equaling 36.9% and 35.5% respectively in KSA, making it the 15th most affected country in the World). Consumers are becoming more aware and more concerned about what they eat, and more loyal to manufacturer brands that produce healthier products.