Nearly one in two people worldwide (45%) say that Covid-19 is one of the top issues facing their country in March 2021, one year after the global pandemic was declared. Although this is down 5 points from last month and the lowest level recorded since October 2020.
Unemployment is the second biggest issue across all countries (37%), followed by Poverty & social inequality (31%) and Financial/political corruption (29%). Crime & violence is the fifth most prominent issue this month, level with last month at 24%.

When asked whether things in their country are heading in the right direction or are off on the wrong track, over six in 10 (62%) members of the public across all 27 countries opted for “wrong track” in March 2021, while 38% say “right direction”.
This more pessimistic view is most widely shared by those in Peru (85%), South Africa (80%) and Poland (also 80%). Three-quarters or more in Argentina (78%), Spain (77%) and Chile (75%) also say that things in their country are heading in the wrong direction.
The countries with the largest month-on-month increases in the respondents saying things are on the “wrong track” are Turkey (+5 points) and Hungary (+4).
On the other hand, more say things in are heading in the “right direction” in Great Britain (+11 points), the Netherlands (+8) and the US (+5) compared to last month.

This month’s headlines for each of the top issues are set out below.
1 Coronavirus (45%)
Malaysians remain the most concerned about Covid-19, but today’s 61% is significantly lower than the 77% of last month. Just behind, with 60%, is Great Britain, again in second place, followed by Japan and the Netherlands (both 58%).
Most countries record a decline in concern about Covid-19 this month, but there have been moderate increases in Brazil (+6) and Hungary (+6).
Coronavirus is the single top issue in 14 of our 27 countries, down from 17 last month. The three countries that have dropped off this list are South Korea (where Covid-19 is now joint-top with Unemployment), Mexico (where Crime & violence is once again first in the list), and Spain (Unemployment overtakes Covid-19). 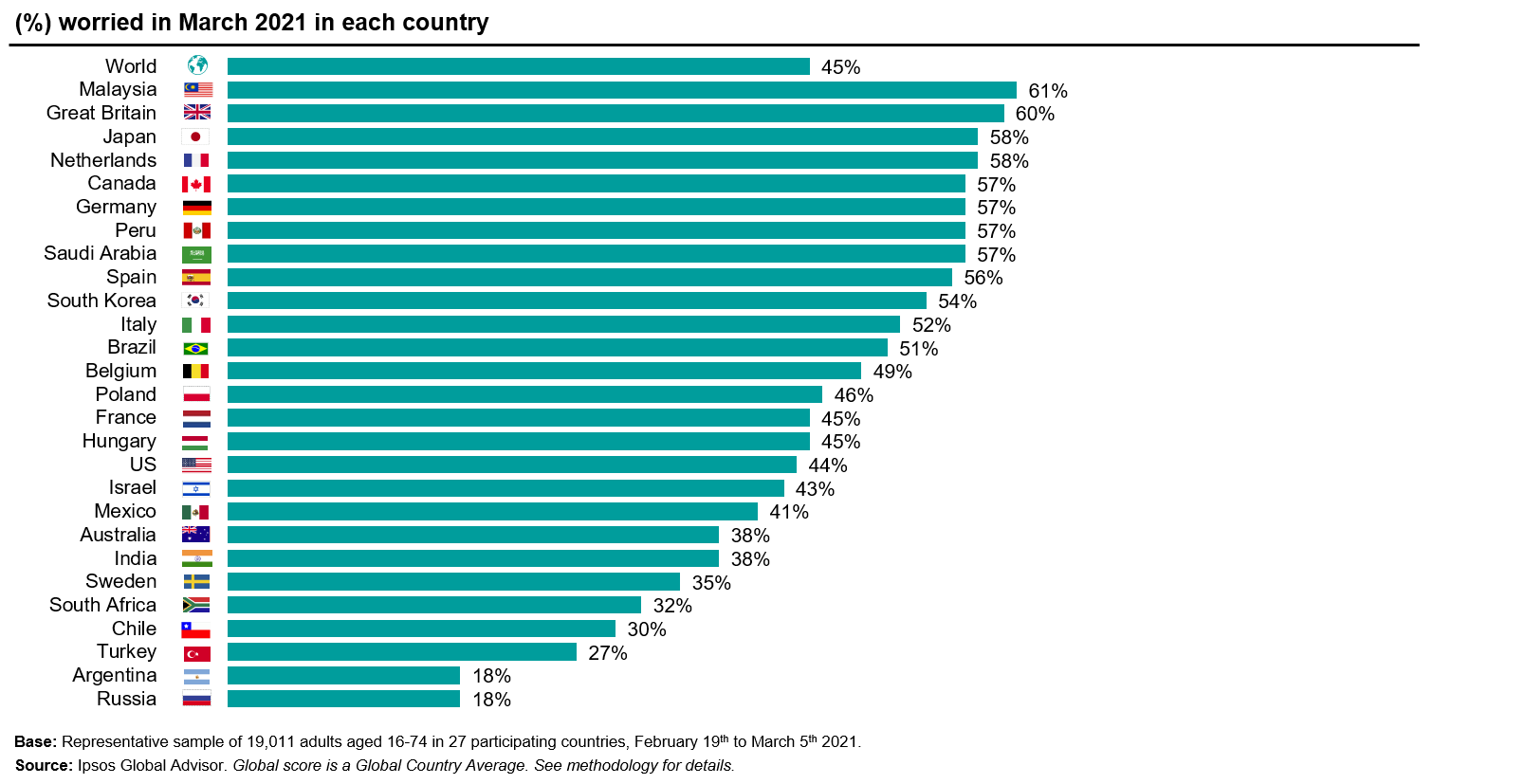 Financial/political Corruption
Financial/Political Corruption is the fourth greatest global concern. Our study shows almost three in ten (29%) on average counting it among the big issues facing their country today. Replacing Russia, South Africa is now top of the table; an 8-point increase here means almost two-thirds (64%) say corruption as a top concern. Next are Peru and Russia, both with 50% of the public worried about this.
Also registering high levels of worry about corruption are Malaysia (49%) and Hungary (46%).
Spain shows the greatest increase on this issue since last month (+13 points), followed by Mexico (+10) and Japan (also +10).

Crime & violence
Crime & violence is the 5th largest issue of concern in March with an average of 24% across all countries selecting it as one of the most important issues facing their country.
Sweden shows the highest score (59%), followed by Chile and Mexico (both 51%), and then Argentina and South Africa (both 47%).
This month, Crime & violence emerges as the number one issue of all 18 in our study in Argentina, Chile, Mexico and Sweden.
Previously, our survey had found Mexicans most concerned about Covid-19. While this was top for the first two months of 2021, it has now shifted back to Crime & violence.

See more in our global summary report for March 2021.
Also see last month’s results, which includes more of a look back over the previous year.