Londoners’ and Parisians’ satisfaction with their local area is undented despite lockdowns forcing them to spend much more time closer to home, and satisfaction with local services in the cities has actually increased, according to a new study of the two major European capitals.

The research, by King’s College London, the University of Paris and Ipsos MORI, suggests that predictions of the ‘death of the city’ due to the COVID-19 crisis may be wide of the mark, with the study also finding little change since 2019 in the share of Londoners and Parisians planning to move out of their city, and majorities saying their capital will bounce back from the pandemic – albeit slowly.

But the research, by King’s College London, the University of Paris and Ipsos MORI, finds notable differences between the two cities on other important issues:

The two cities also differ on the extent to which residents think they get more than their fair share of central government spending.

The findings are based on surveys of around 1,000 residents from each capital in April-May this year, and follow on from a 2019 study, allowing researchers to track changes in attitudes since then.

There is little sign that COVID is leading to the ‘death of the city’, even though the recovery could be slow.

56% of Londoners now say they are satisfied with local services such as schools, transport and police – a big increase from 37% in 2019. In Greater Paris, satisfaction has risen from 41% to 51%.

63% of people in Greater London also now say they’re satisfied with their local area as a place to live, virtually unchanged from 64% two years ago, while 59% of residents of Greater Paris are satisfied, up slightly from 53% in 2019.

And since then, there has only been a slight increase in Londoners who say they’ll leave the capital in the next five years (43% vs 37%), and in Greater Paris, the proportion saying the same is virtually unchanged (45% vs 44%), suggesting lockdowns and new working patterns have not led to a widespread revaluation of city life.

Majorities of both Londoners (66%) and Parisians (57%) also think it’s likely their city will bounce back from the COVID crisis, with only around one in 10 each thinking the chances are slim – although most also think the recovery will be slow rather than quick (57% and 58% in Greater London and Greater Paris respectively). 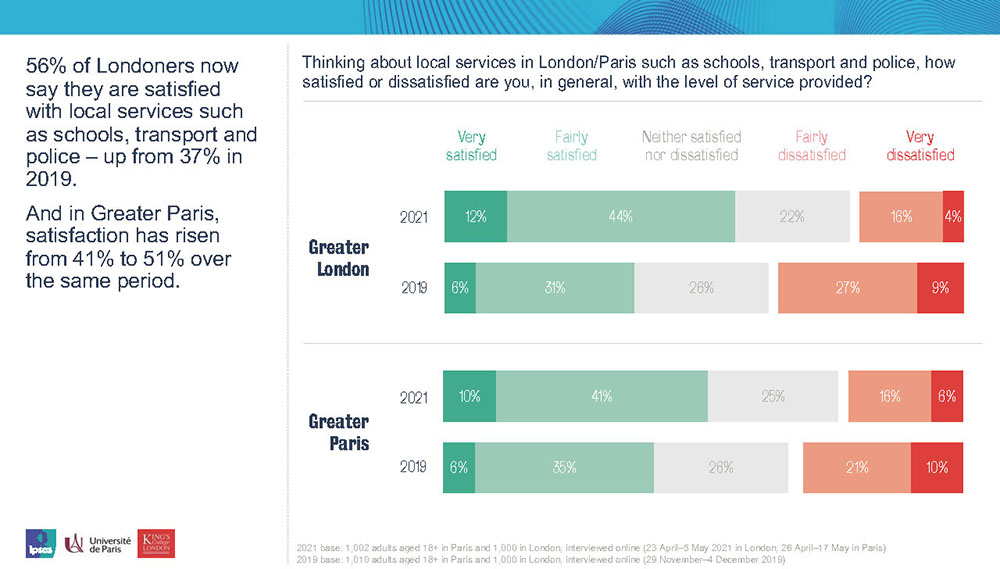 Social cohesion is perceived to be better in Greater London, where people are also far more accepting of immigration.

74% of Londoners say people of different backgrounds get on well together in their local area – compared with 57% of Parisians who feel the same way.

Similarly, Londoners (58%) are much more likely than Parisians (34%) to feel that immigration from elsewhere in the country has been good for their capital. In line with this, half of Parisians (52%) think their city doesn’t need more immigration, compared with a third of Londoners (36%). 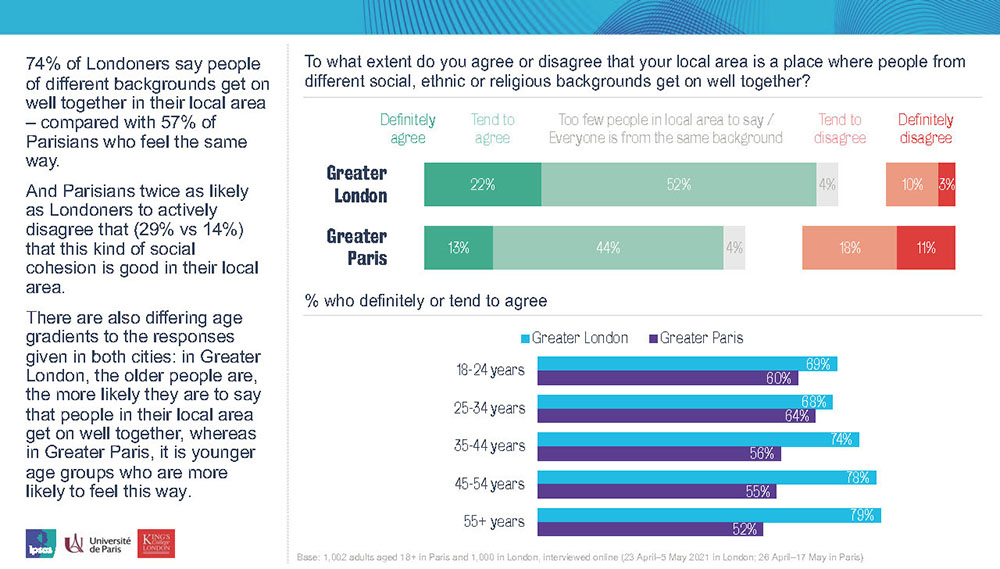 But inappropriate or unwanted behaviour towards women is reported to be a bigger problem in the UK capital.

On average, women in the UK capital say they’ve been stared at inappropriately 15.1 times during the time they’ve lived in the city, while the equivalent figure for women in Greater Paris is 10.1 times. In both cities, women are much more likely to experience these unwanted behaviours than men.

There is an even bigger gap when it comes to inappropriate jokes or sexual comments, with Greater London women saying they’ve experienced this an average of 13.3 times, compared with five times for women in Greater Paris.

Overall, the majority in both cities feel safe walking alone in their local area, but four in 10 women in each capital feel unsafe on their own after dark. 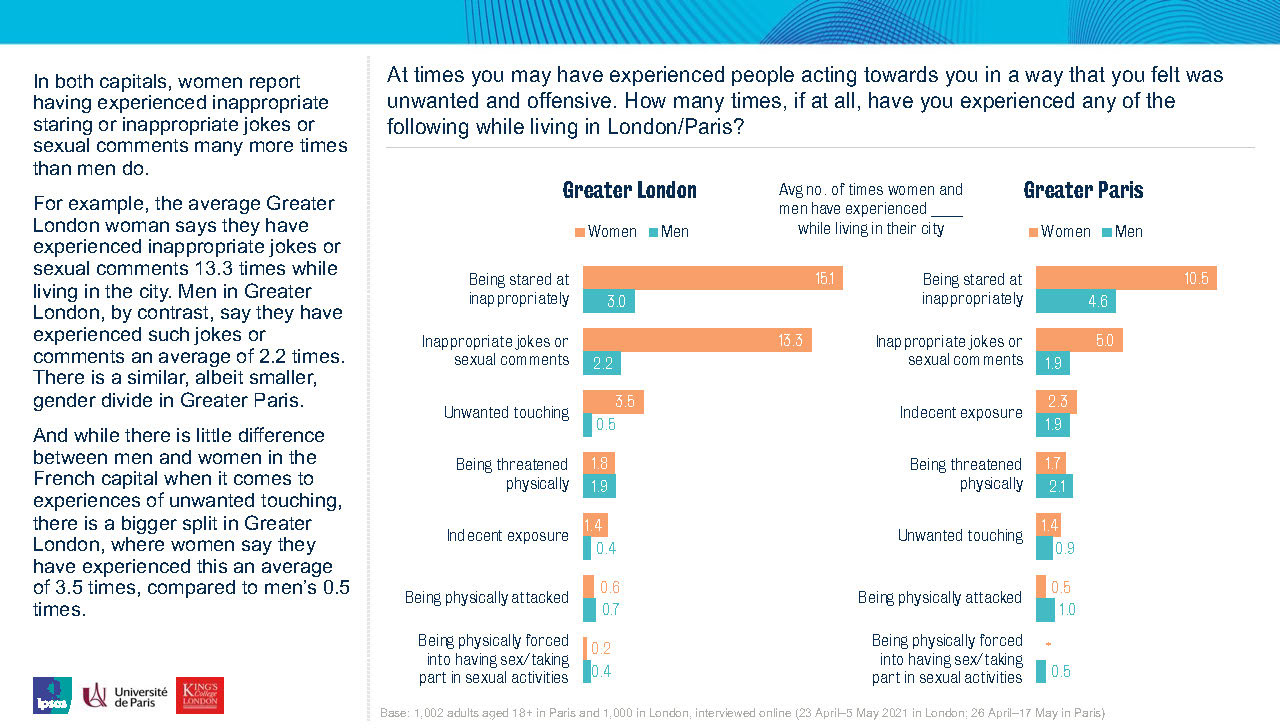 Greater London is seen as a place for the rich and young, while Greater Paris is seen as better for families, the old and poor.

84% of Greater London residents say their city is a good place to live for rich people – much higher than the 63% of residents of Greater Paris who say the same about theirs. By contrast, Parisians (34%) are more than twice as likely as Londoners (14%) to say their capital is good for poor people.

And 53% of people in Greater Paris think their city is a good place to live for families, compared with 43% of Londoners who feel this way about the UK capital – but this is up from 32% in Greater London two years ago.

Greater London has also seen an increase in the proportion who think the city is well-suited to young people, rising from 54% in 2019 to 64% now. This is 9 percentage points higher than the equivalent figure in Greater Paris, which at 55% is up from 47% in 2019. On the other hand, 50% of Parisians believe their city is good for older people, compared with 31% of Londoners who say the same about theirs. 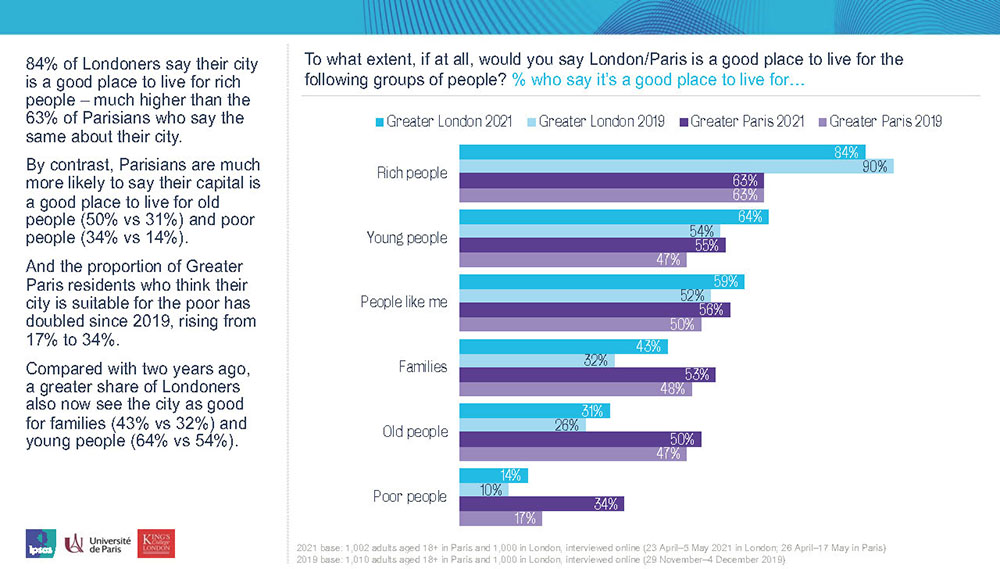 Greater Paris beats Greater London on perceived affordability of housing, while the UK capital is thought to be much better for work and business.

Among those who do not own their own home, Londoners (89%) are more likely than Parisians (76%) to agree that it’s too expensive for them to buy a property in their city. And more generally, residents of Greater London are more likely to disagree that housing in their capital is affordable for people like them (65% vs 52%).

But 73% of Londoners think their city is a good place for people like them to start a career and 68% say it’s a good place to start a business – much higher than the 51% and 48% who say the same respectively in Greater Paris. 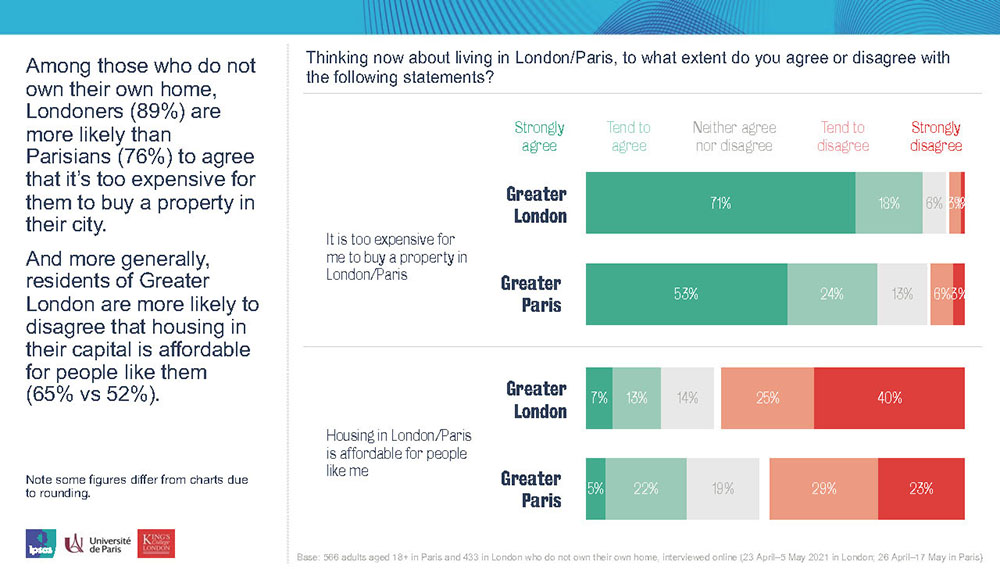 Londoners are more likely to think they get more than their fair share of central government spending.

Around four in 10 people in both capitals think their city gets pretty much the right amount of central government spending – the most common response given – but Londoners (34%) are much more likely than Parisians (13%) to feel their capital gets more than its fair share.

Depending on people’s views of what constitutes a “fair” share, this could be seen as a misperception: the Office for National Statistics has found that Londoners provide more in tax revenues than they receive in public spending – but only around one in five London residents (18%) think their city gets less than its fair share. 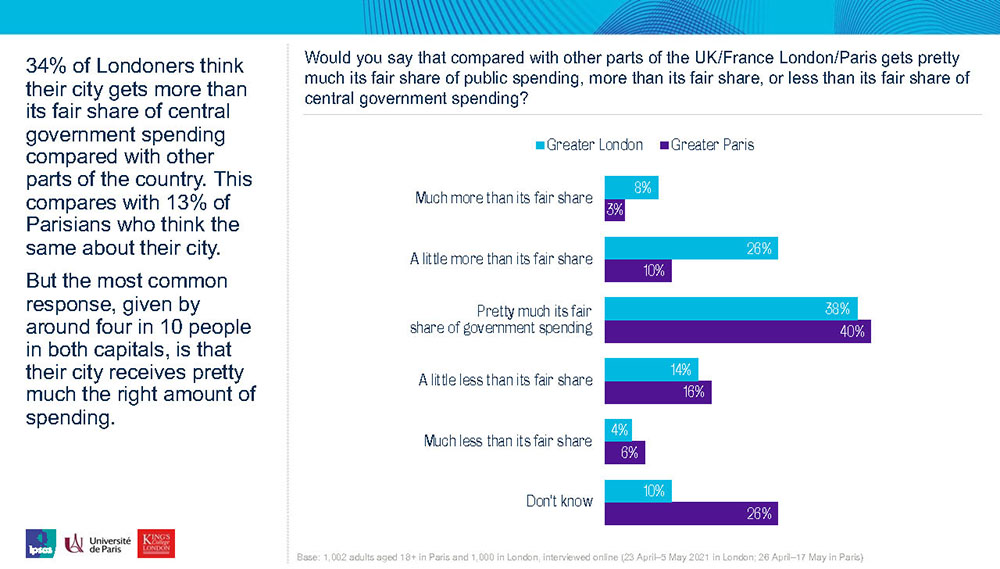 At a time when the pandemic has brought the future of urban life into question, it is reassuring to see that the ‘death of the city’ feared by some has not manifested, with relatively little change in the number of citizens planning to flee London or Paris for the countryside, and satisfaction with neighbourhoods and local services holding up or even improving.
But both cities also face clear challenges – some shared, some specific. London seems to be viewed as a place of great economic opportunity, but a harsher place to live for the less well-off, elderly, families and women; Parisians seem to feel that social cohesion remains an issue in their city, and they are much more negative about immigration. As well as reassuring policymakers in each capital that city life is not under immediate threat, this comparative study helps to highlight priority areas for improvement in both London and Paris.

The COVID-19 pandemic has forced a change in the way that we all live our lives, and that has had a particular impact on cities, with offices left vacant or only minimally used for long periods of time. This research shows that despite those challenges, the sometimes heralded ‘decline of the city’ doesn’t seem take enough account of the views and beliefs of the people who live in them who are mostly happy with where they live, more satisfied with their local services than before and optimistic that the capitals can bounce back from the pandemic, even if that won’t be immediate.
There is still a call for action from residents to improve the quality of city life in areas such as the environment, housing, transport, safety (especially for women) and the cost of living to reduce the temptation of moving out, but the future of London and Greater Paris as powerhouse Capital cities seems secure.

Ipsos MORI interviewed 1,000 adults aged 18+ in Greater London between 23rd April and 5th May 2021, and 1,002 adults aged 18+ in Greater Paris between 26th April and 17th May 2021. “Greater Paris” includes people interviewed in both the city of Paris and its inner suburbs; “Greater London” includes people interviewed across the Greater London area. Interviews were carried out online, and data are weighted by age, gender, region within the city, and work status to the profile of the population.  All polls are subject to a wide range of potential sources of error.