The May 2018 Issues Index shows that public focus remains on the same issues as last month. The NHS is a bigger concern than Brexit overall, with half seeing the health service as a big issue for Britain (49%), ahead of the four in ten who say the same for Brexit (42%).

Despite being the second-most important issue overall, Brexit is the most commonly cited concern when the public are asked to name the single biggest issue facing the country. Almost three in ten (28%) see Brexit as the most pressing issue, including one third of men (33%), four in ten of those from social grades AB (40%), and almost half of Conservatives (46%). By comparison, 18 per cent see the NHS as the single biggest issue facing Britain.

For the second month running, crime is the third-biggest issue facing Britain, with 23% of the public identifying it as a major concern. As was the case in April, Conservatives (33%) and Londoners (31%) are particularly worried about crime. 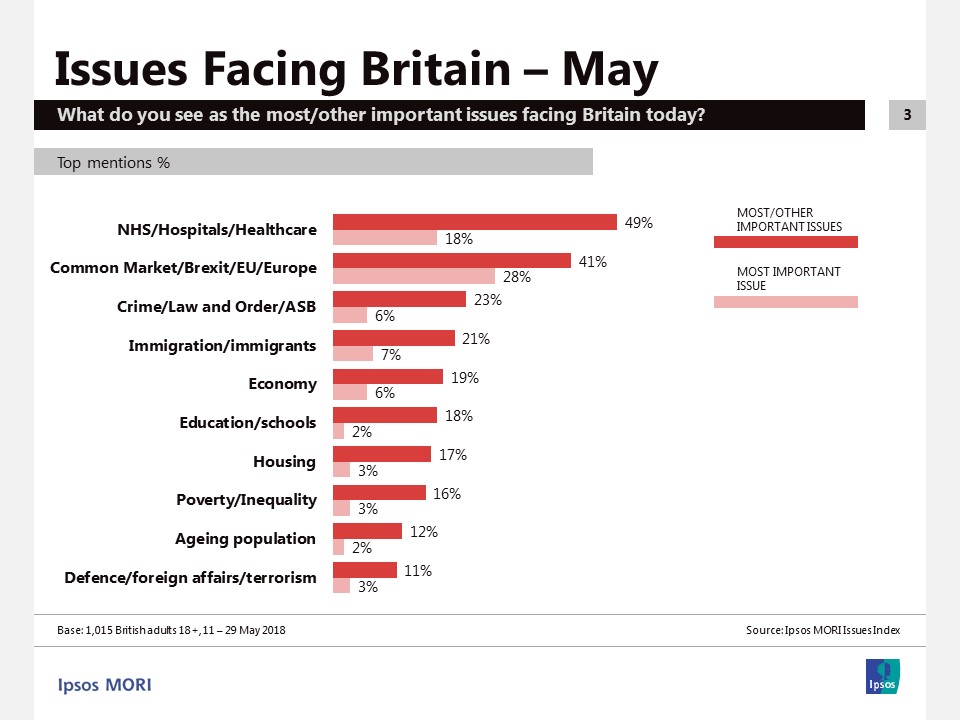 The views of Londoners differ from Britons overall, with crime and housing topping their list of concerns this month. However, these are just two of six issues that worry the residents of the capital near equally. As well as crime and housing, those living in London are more likely to consider the economy and immigration as big issues than Britain overall. By contrast, they are less likely than the national average to cite Brexit and the NHS as concerns – although both remain near the top of their worries.

Yet, like the British population at large, the largest proportion of Londoners consider Brexit to be the single biggest issue – 22% mention Britain leaving the EU as the primary concern. The next biggest single issue for Londoners is housing, mentioned by twelve per cent.

Ipsos MORI's Issues Index is conducted monthly and provides an overview of the key issues concerning the country. Ipsos MORI interviewed a representative quota sample of 1,015 adults aged 18+ across Great Britain. The answers are spontaneous responses, and participants are not prompted with any answers.
Ipsos MORI's “Capibus” vehicle was used for this survey. Interviews were conducted face-to-face in-home between 11 and 29 May 2018 at 195 sampling points across Great Britain. Data are weighted to match the profile of the population.