The majority of the public support the junior doctors’ strike starting today, but support for this new round of action is slightly lower than for previous strikes when emergency care was not affected, finds a new Ipsos MORI poll for BBC News.

The findings also indicate that public support for the all-out strike, where no emergency care is provided, is higher than was suggested when the same question was asked in January. Some 57% support the current walkout, but when asked in January whether they would still support the strikes if emergency care was not provided just 44% said they would. Nearly one in five (18%) strongly oppose the full walkout. 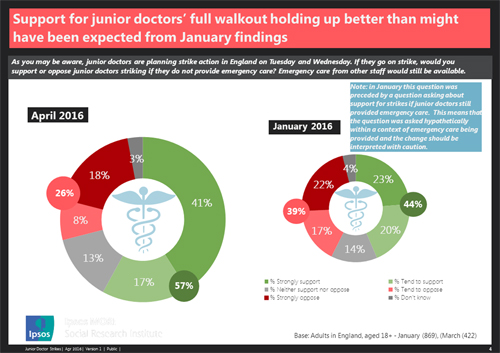 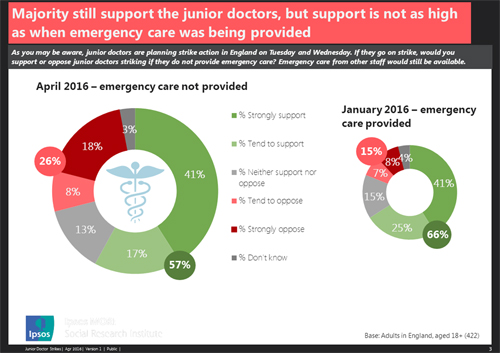 The new figures are published as doctors prepare to strike for a fifth time, and the show that an increasing number see both parties are at fault for the continuing dispute.  The proportion saying the doctors and the government are equally at fault continues to rise; over a third (35%) blame both sides, up from 28% in March and 18% in February .Over half (54%) now say that the government is more at fault for the dispute continuing this long, down from 57% in March (and 64% in February), and the number saying the junior doctors are more at fault has also fallen to 8% from 11% in March (and 13% in February). 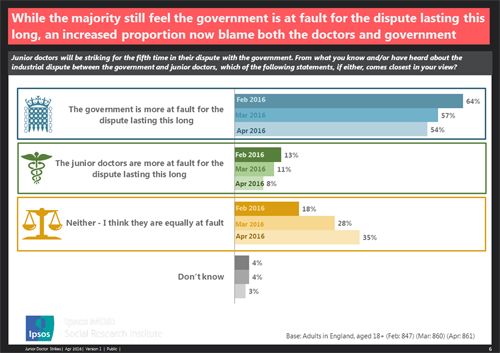 "We’re seeing today that support for the junior doctors is still prevalent among much of the public, even when emergency care is withheld. However, support is not as high as when we were polling for the strikes where emergency care was provided, as we suggested might happen in January. However, the erosion of public support has not been as stark as the January polling suggested, and the public still have some patience left for the junior doctors’ cause."