When we compare Starmer to other leading politicians we find:

Starmer and the Labour Party

Perceptions of Starmer’s impact on the Labour Party are mixed. Whilst Britons are more likely to think he will change the Labour Party for the better (30%) rather than worse (13%), a clear majority (57%) think he will make no difference (40%) or say they don’t know (17%). Meanwhile, the 30% that say he has changed them for the better has fallen significantly (-13 points from 43%) since last April. Labour voters are more likely to say he will change the party for the better (38%) rather than worse (22%) with 29% saying he has made no difference and 11% saying they don’t know.

These figures are reflected in Labour’s overall favourability ratings. Just one in four (26%) Britons are favourable towards the Labour Party (down 2 points from February) and 43% are unfavourable (+4 points). The 26% that are favourable is unchanged from the last rating Labour achieved under Jeremy Corbyn in March 2020, although the proportion that are unfavourable has fallen in that time from 52% to 43%. 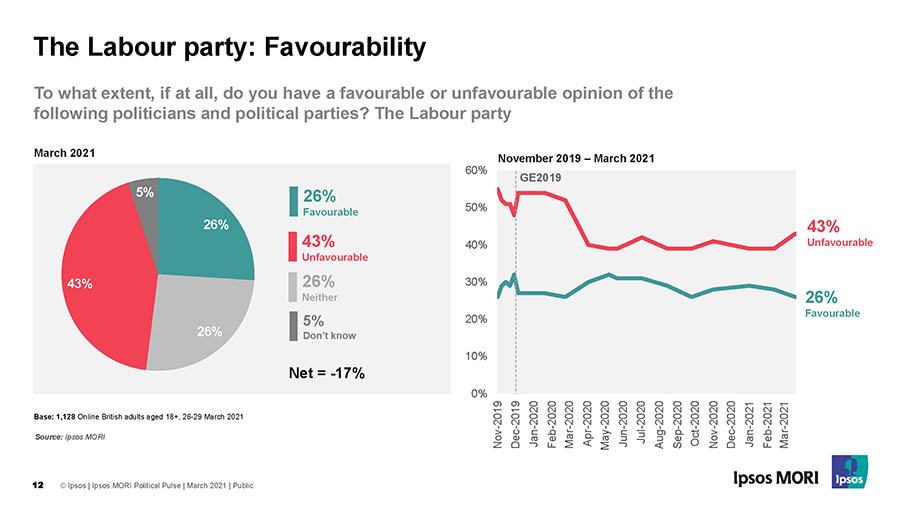 When compared to other parties:

We asked the public to rate Starmer and Johnson based on whether a series of personality traits applied to them or not. For many attributes Johnson led Starmer on both these attributes applying to him and not applying, reiterating the fact that many have still to make their mind up on the Labour leader whereas Johnson often polarises opinion.

However, in terms of simply whether attributes ‘apply’ to each leader, Johnson beats Starmer on a series of important character traits including:

Johnson also leads Starmer on having ‘a lot of personality’ (+41) whilst Starmer only leads Johnson on the one measure ‘he pays attention to detail’ (Starmer +4pts). 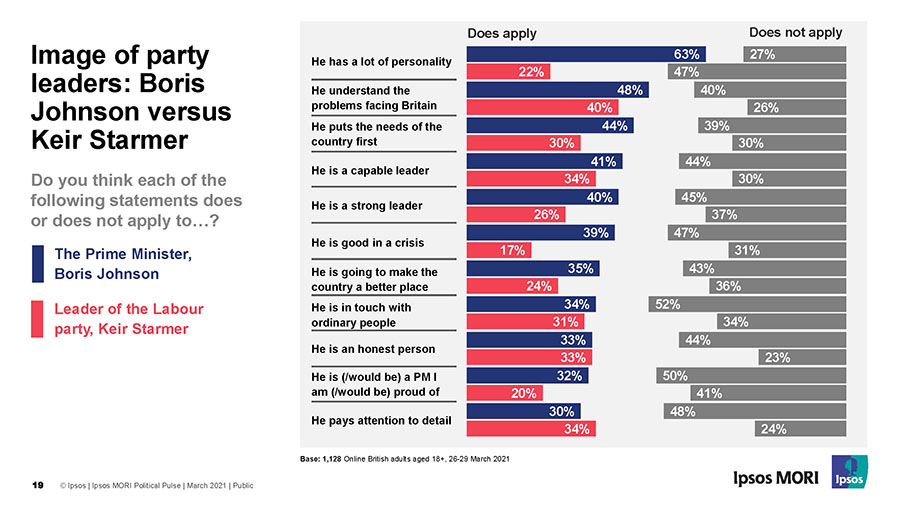 Keiran Pedley, Director of Politics at Ipsos MORI, said of the findings:

One year into his time as Labour leader, the honeymoon is clearly over for Keir Starmer. His favourability ratings have fallen and he trails Boris Johnson on several key leadership character traits. Meanwhile, while the public are less hostile towards the Labour Party as a whole since he took over, the jury is out on whether he is really making people actively more positive towards them. However, it should be stressed that the next General Election is many years away and Starmer’s personal poll ratings compare favourably to several past Labour leaders. Time will tell if the current positive mood music around the government can last. If it doesn’t then perhaps Starmer may capitalise.

Ipsos MORI interviewed a representative sample of 1,128 British adults aged 18+. Interviews were conducted online from 26-29 March 2021. Data are weighted to match the profile of the population. All polls are subject to a wide range of potential sources of error.