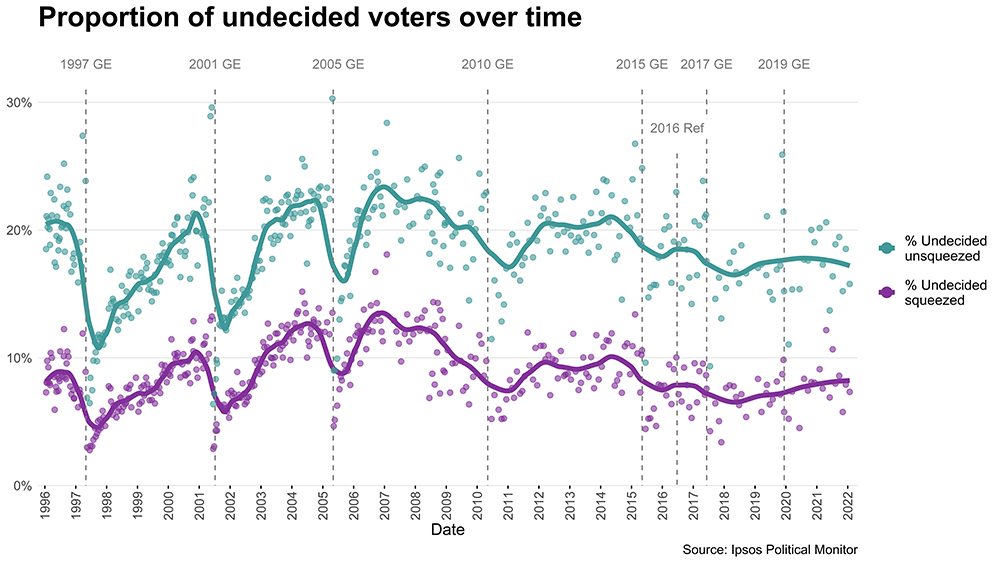 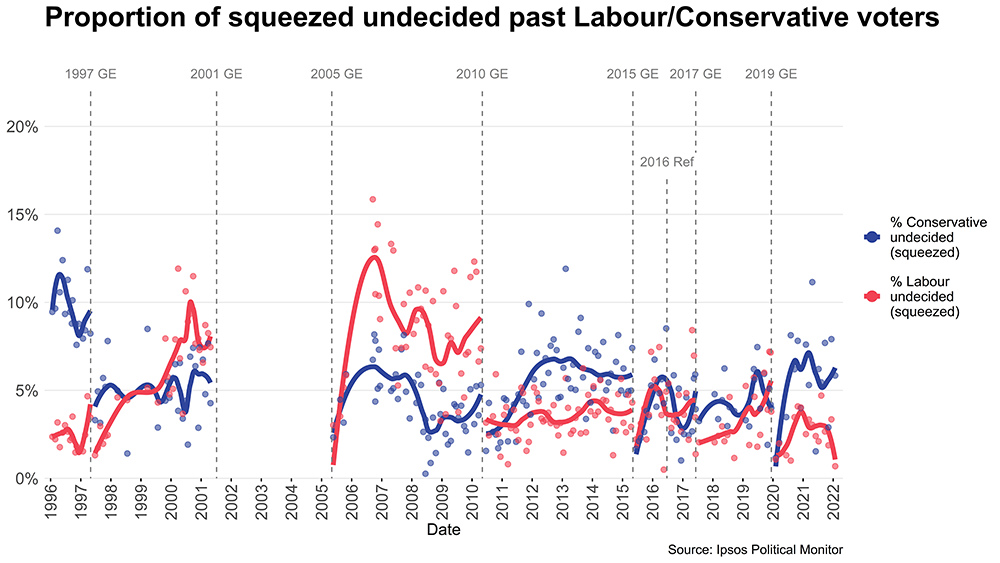 Other 2019 Conservative voters may still support the party, but simply at the moment be less motivated and say they are less likely to vote.  The data shows that the proportion of former Conservative voters saying they are likely to vote at the next election was on average 4 points lower in our polls from September compared with earlier in 2021.  However, while this may have had some impact on the fall in the Conservative share, it’s also important to note that there is little to choose between former Conservative and Labour voters on this measure, and again this only makes a small difference to Labour’s lead. 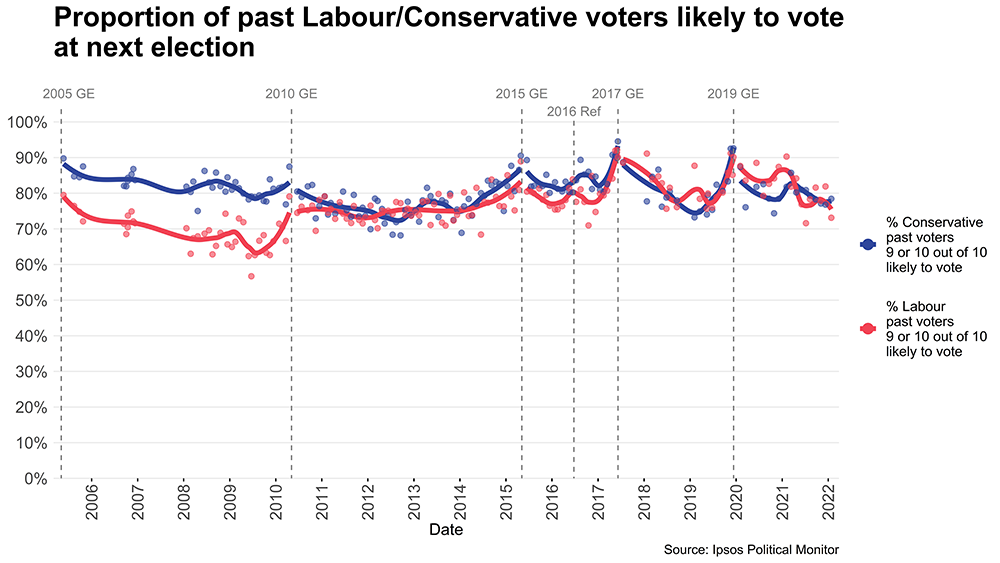 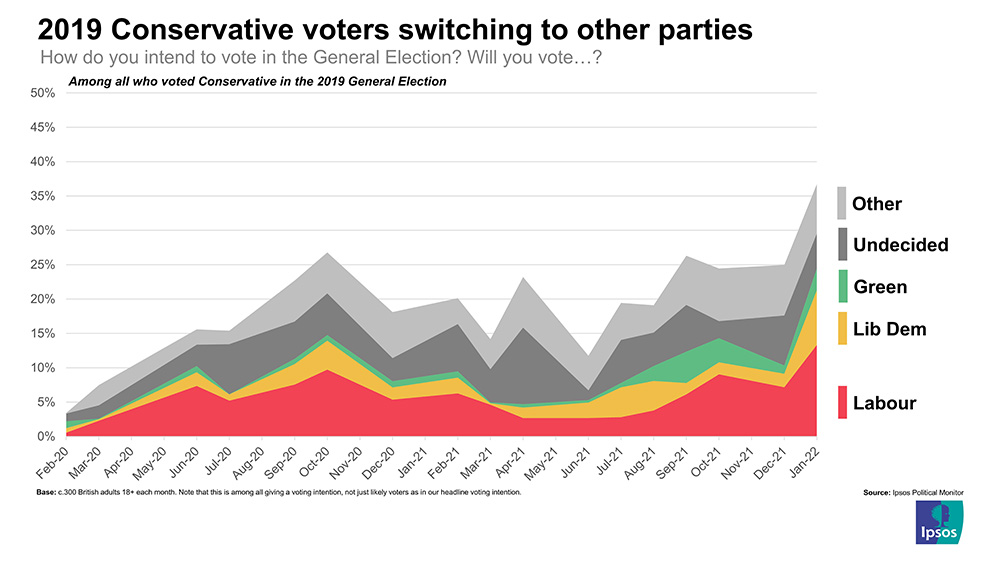 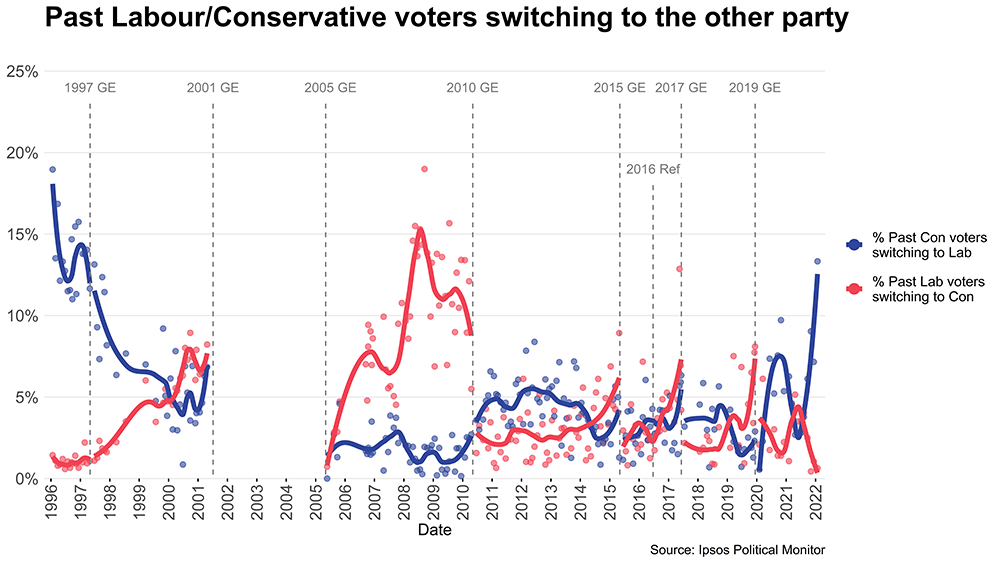 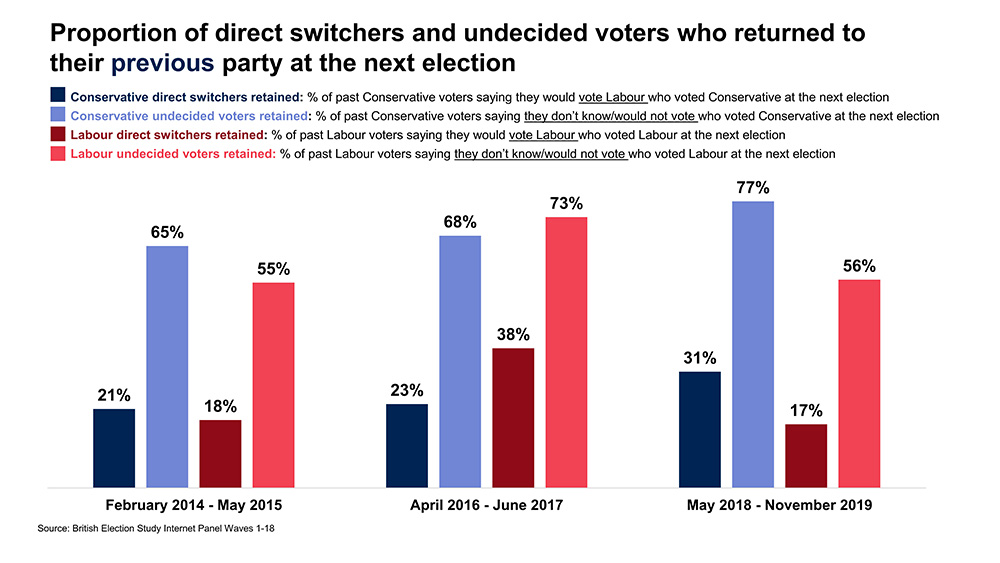 But voters have been more volatile than ever in the last few years so are Conservative to Labour switchers more likely to return? Ipsos UK’s data shows that the proportion of voters switching party has been higher since the 2010 election compared with earlier, and peaked in mid-2019. 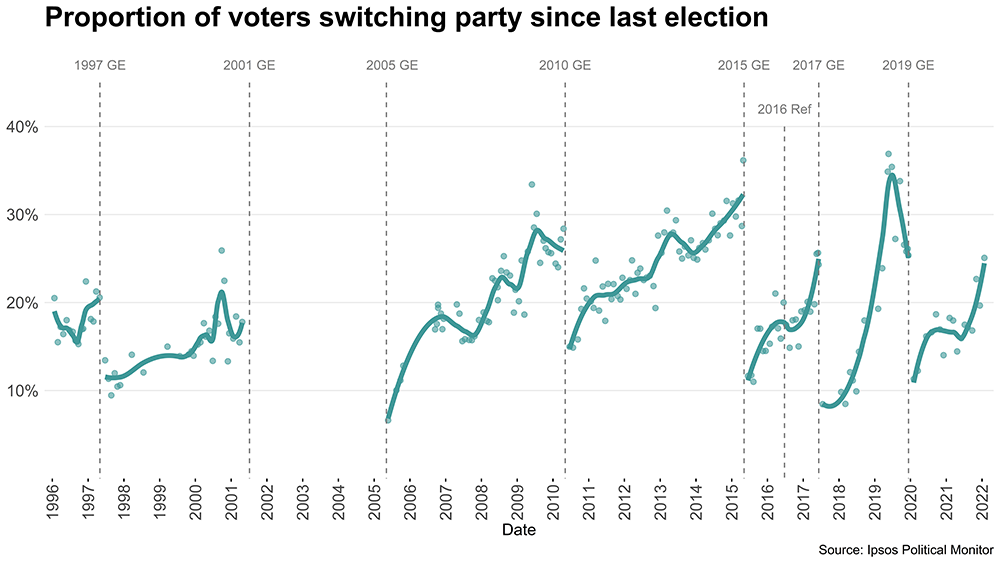 But there are two key factors that could determine if Conservative to Labour switchers return: events and leadership ratings (of course, there also other routes for the Conservatives to pick up votes, from other parties or previously undecided voters).

The impact of the first vaccine rollout demonstrates the first. In October 2020, Labour also led in the polls when 10% of 2019 Conservative voters switched to Labour. However, this lead was quickly lost as the vaccine rollout boosted the Conservatives and the proportion of 2019 Conservative voters switching to Labour fell to just 3% in April 2021. But this also demonstrates the scale of the challenge the Conservatives face to turn their position around and it is still too early to say what the impact of the crisis in Ukraine will be on voting intentions.

The other key factor is leadership ratings. According to British Election Study data, one of the strongest predictors of whether Conservative to Labour switchers from 2014 to 2019 returned to their party at the next election was how much they liked the Conservative leader in the month before the election. If Boris Johnson can turn around his poor ratings this would certainly bring back switchers, but no Prime Minister with his current satisfaction figures has gone on to win an election so this would need to be a historic transformation (and again, whether Ukraine will lead to a long-term improvement is still not settled). Another possibility of course is a change in leader – providing any new leader bounce does not quickly evaporate. 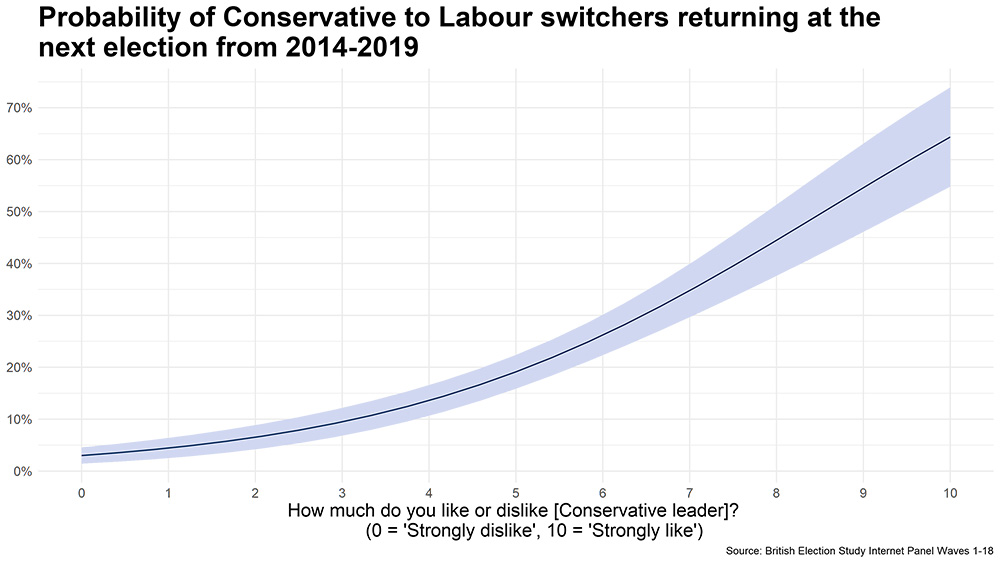 The outcome of the next election is still uncertain – particularly given the nature of the times we live in – but given their position in the polls the Conservatives should be worried.  Undecided voters and demotivated voters both play their part, but it is the rise in switchers and the difficulty in winning them back that could be the biggest challenge of all.

The figures in chart 6 were derived using data from the British Election Study Internet Panel Waves 1-18. Respondents were classified as direct switchers if they gave a Labour/Conservative general election vote intention in any of the panel waves between elections (waves 1-5, 7-12 and 14-17) or undecided if they responded ‘don’t know’ or ‘would not vote’ in any of these waves. Respondents were weighted using the cross-sectional weight of the first wave in which they switched parties or gave an undecided response. While this is an approximation, unweighted figures show very similar results. Base sizes are displayed below:

[2] Respondents are first asked ‘How would you vote if there were a General Election tomorrow?’ and if they respond that they are undecided are asked ‘Which party are you most inclined to support?’. Squeezed undecided voters are those that respond undecided to both of these questions.

[i] See Annex for methodology.