Britons are more likely to want to do this than any other country polled. Globally, just under half (46%) say they would want their country to do this. 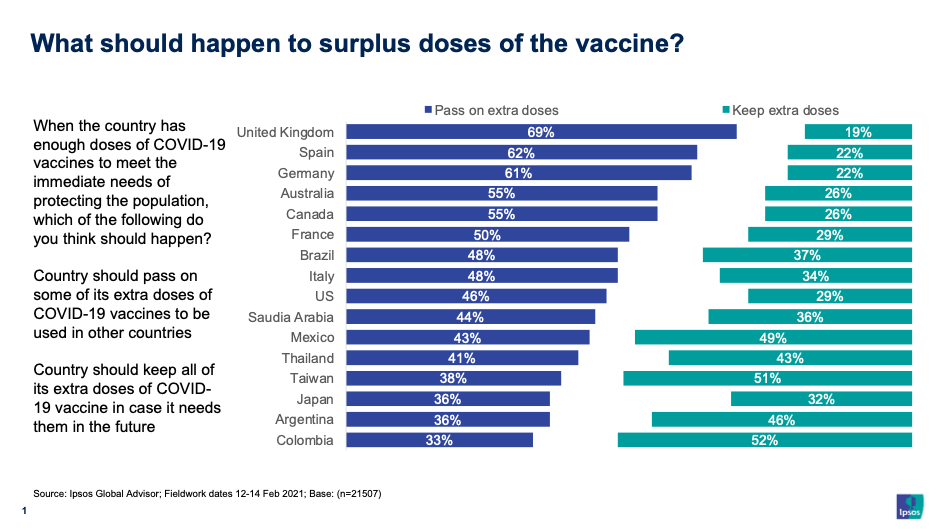 Just one in five (19%) say that we should keep all of our doses in case we need them in the future, compared with 37% globally.

The UK Government’s decision to pass spare COVID-19 vaccines will strike a chord with Brits who are the most likely of the countries we polled around the world to think this is the right decision. In a global pandemic, the sharing of excess vaccines with other countries is the best way to help beat the virus.

• The samples in Australia, Canada, France, Germany, Italy, Spain, Japan, Malaysia, Saudi Arabia, South Korea, Taiwan, Thailand, the U.K. and the U.S. can be taken as representative of these countries’ general adult population over age 16 or 18 (US and Canada) and under the age of 75.

• The sample in Argentina, Brazil, Colombia and Mexico is more urban, more educated and/or more affluent than the general population and should be viewed as reflecting the views of the more “connected” segment of the population.

• The data is weighted so that each market’s sample composition best reflects the demographic profile of the adult population according to the most recent census data.

• Where results do not sum to 100 or the ‘difference’ appears to be +/-1 more/less than the actual, this may be due to rounding, multiple responses or the exclusion of don't knows or not stated responses.

• The publication of these findings abides by local rules and regulations.