In a new online survey by Ipsos, more than 2 in 5 (44%) of Britons say they expect cities to become less attractive places to live in over the next few years. Nearly 4 in 10 (39%) believe cities will become less desirable places to work in the future while 19% say their draw will increase and 32% say it will stay the same. 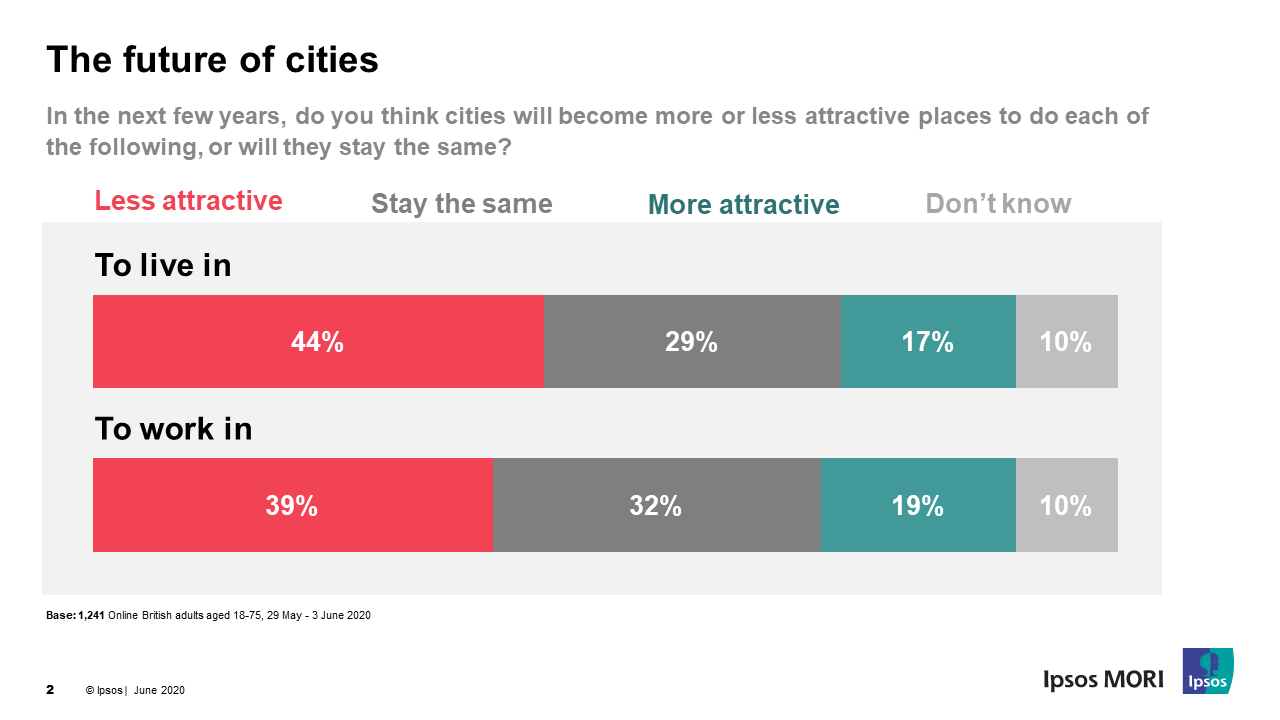 The proportion of people who, given the choice, would prefer to live in a big city has decreased since 2018. Two years ago, 28% said they would prefer this, now only 22% agree. There has been a similar swing away from favouring cities among those living in urban areas of Britain.

Perhaps unsurprisingly, younger generations are most likely to expect the appeal of cities to grow over the next few years, a third of 18-34s say this for both living (33%) and working (32%). However, opinion is still split in this age group, 34% believe cities will become less attractive to live in and 30% to work in. Only 7% of 35-54-year olds predict cities to become more attractive places to live in and 15% to work in. Among those aged 55-75, 12% expect to see more people want to live in cities and 11% to see more wanting to work there.

The ‘brain drain’ is now less strongly felt that it was two years ago. A quarter of Britons agree that “too many people are forced to leave my area e.g. to get work, better housing etc.”, down from 40%. This continues to be more strongly felt among younger age groups and those living in rural areas, but much less so than it was.

A third of Britons expect to see an increase in how often they work from home rather than travel into work (33%) in the next 12 months, compared to before the coronavirus pandemic, while 12% expect this to decrease. Almost half (46%) expect it to stay the same. Three in five (60%) expect that due to technology, they will be travelling to work less in the future. However, this has decreased since 2018 when two-thirds (66%) expected this to happen. 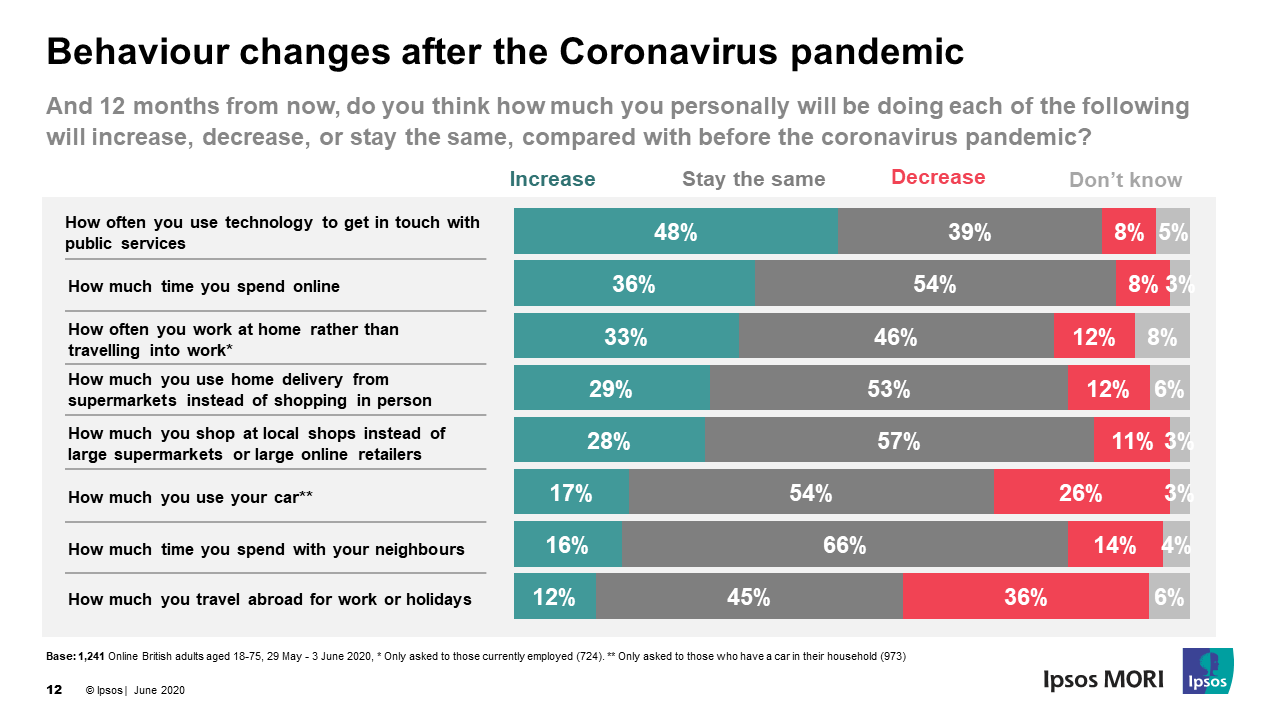 Fewer than 17% of car owners expect to see their car usage increase, while a quarter say it will go down (26%), and over half believe it will stay the same. Two-thirds (64%) say they would struggle to adapt their lifestyle to being without a car, down from 70% eleven years ago. Only 1 in 10 (12%) expect to see the amount they travel abroad, for holidays or business, to increase, however over a third (36%) expect this is go down.

Overall, 36% expect to see the amount of time they spend online to go up, only 8% say it will do the opposite. This time may be spent using online public services, such as GPs or local councils or grocery shopping; almost half (48%) expect this to increase over the next few years with a further 29% expecting to see an increase in online grocery shopping.

Three in ten (28%) say their use of local shops, rather than supermarkets or large online retailers, will increase. While only 11% expect this to go down. Over half (54%) expect to see no change in 12 months’ time as a result of coronavirus.

Sixteen per cent expect the amount of time they spend with their neighbours to increase due to the coronavirus pandemic. Two-thirds (66%) expect this to stay the same and 14% expect it to decrease. Overall, 4 in 10 (39%) expect to spend less time with friends and family in person due to technology.

Relative to citizens of other countries, the British have tended to be cooler on the idea of city life, and our survey suggests many more expect them to get worse than better over the next few years as places to live and work.
As well as long-term factors such as declining air quality, congestion and housing affordability, there are likely to be some short-term concerns at play; in April we found people expecting city-dwellers to be to hit harder by Coronavirus than those in rural areas.
What next? Shifts in the way we work and live could have profound implications for our cities, for good and for ill. This survey points to some potentially very significant changes in behaviour – for example, if 26% are car owners are right and they use them less in 12 months’ time and if 33% of workers don’t commute as much, then our cities will look and feel very different.