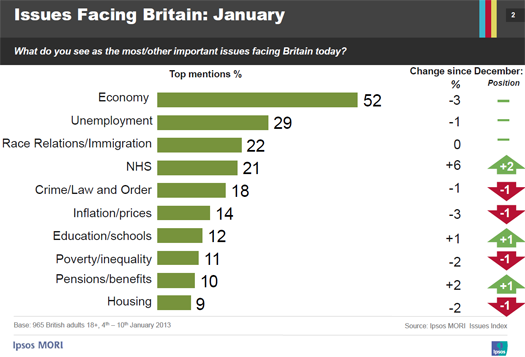 Three in ten (29%) are concerned about a related issue, unemployment, and though this remains the second most important issue facing Britain, as it has been since August 2011, this is the lowest level of concern since that point in time.

Just under a fifth (18%) are concerned about crime/law and order, a much bigger issue amongst Londoners (24%) than it is amongst those in the South East excluding London (12%).

Looking further down the list, one in ten (10%) are concerned about pensions/benefits, though as this rises to 17% of those aged 55+ (compared with 6% of those aged 18-44), there is a suggestion that this concern may be centred around pensions rather than the welfare state generally. Despite the current political attention being given to the EU, only 6% mention this as amongst the most important issues facing the country, in line with recent months. In fact, this issue has never scored higher than 10% since June 2005.

This month we also have released our aggregate issues index data from 2012, which shows that the top 10 issues across last year exactly match the top 10 issues this month, indicating that the public's priorities are unshifting as we go into the new year.

Ipsos's Issues Index is conducted monthly and provides an overview of the key issues concerning the country. Ipsos interviewed a representative quota sample of 965 adults aged 18+ across Great Britain. The questions are spontaneous - i.e. respondents are not prompted with any answers.  Ipsos's Capibus vehicle was used for this survey. Interviews were conducted face-to-face in-home between 4th- 10th January at 150 sampling points across Great Britain. Data are weighted to match the profile of the population.