A new survey by Ipsos shows a significant drop in the number of Britons who think their country’s economy will have changed over the next year as a result of the Coronavirus pandemic, however a large majority remains of the view that this will happen at least a fair amount. While 88% expected to see Britain’s economy change in the next year as a result of the pandemic in May 2020, 77% now feel the same, while 2 in 10 (19%) say it will not change much, if at all.

Similarly, the proportion of Britons who expect society to change in the next year has fallen. Down from 69% in May 2020, 61% now believe British society will be affected by the COVID-19 pandemic over the next year while 32% disagree, up from 26% last year. 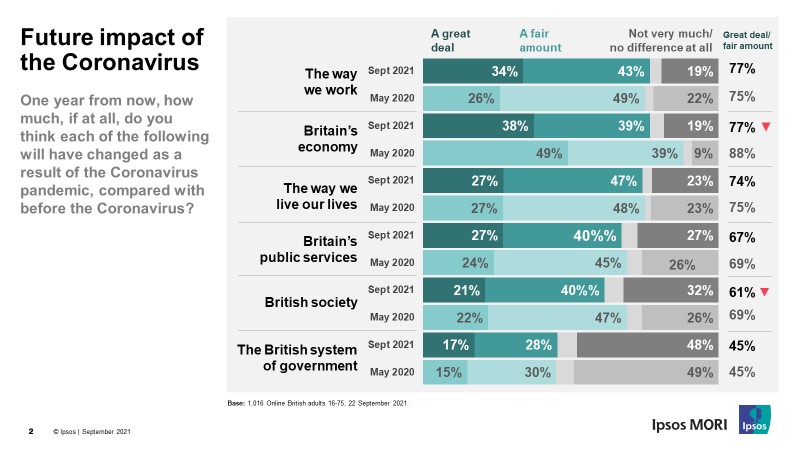 Most Britons still believe the way we work will have changed at least a fair amount a year from now as a result of Coronavirus. More than three-quarters (77%) say this, little change from the 75% who said the same in May 2020.

Clear majorities also expect the way we live our lives (74%) and Britain’s public services (67%) to change a great deal or fair amount over the next year as a result of the pandemic, while less than half (45%) believe the British system of government will be changed by the pandemic over the next year (and only 17% think it will change a great deal).

Considering changes to their own behaviour as a result of the pandemic, Britons are most likely to expect an increase in how often they use technology to get in touch with public services (41%) and how much time they spend online (39%) compared to before the pandemic. Only 3 in 10 (30%) of those currently in work think they will work from home more often than they did before the pandemic, with more than half (54%) expecting they will do so the same amount as before. 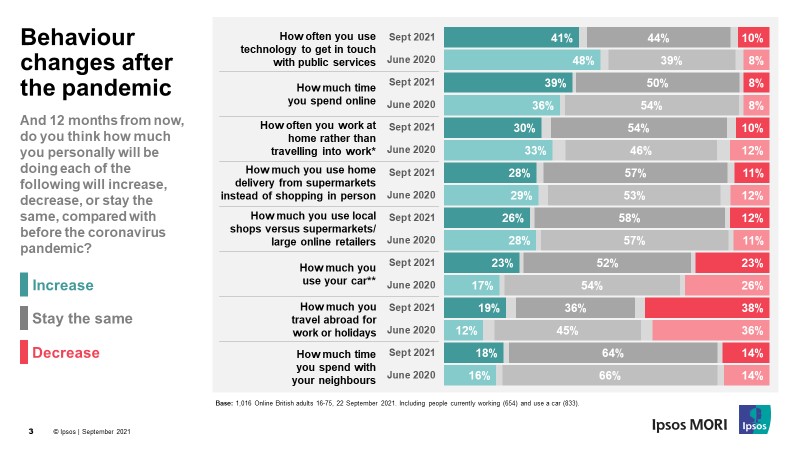 Among those who use a car, only 23% expect to use it more often a year from now than they did before the pandemic, half (52%) expect to keep using it the same amount while 23% say they will use it less.

Almost two-thirds say they will spend the same amount of time with their neighbours in 12 months’ time as they did before the pandemic while only 18% expect this to increase.

Keiran Pedley, Director of Politics and Society at Ipsos, said:

Overall, Britons still expect the Coronavirus pandemic to lead to lasting changes in how we live our lives. In particular, the public still expect to see significant changes in the way we work, in the economy generally and in how public services are delivered. For many, a hesitance to travel abroad persists too. How policy makers and businesses grapple with these changes in future is likely to have a significant impact in how our society develops in years to come.