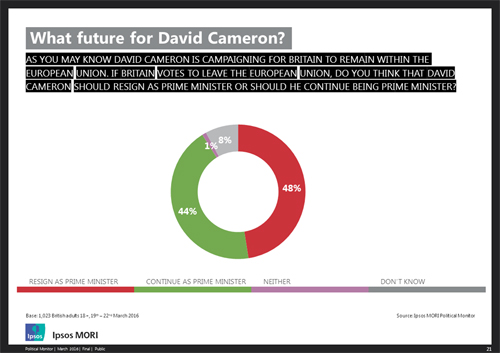 The survey also reveals that “remain” maintains a lead over Brexit by 8 points. Half (49%) would vote to remain in the European Union on 23 June compared to 41% saying they would vote to leave. It is important to note some changes to the way we now ask the question. Since the referendum question last month the date of the vote has been announced so as a result we have slightly modified the question to include a preamble reflecting this. We also now include a follow-up question asking which way the respondent would be most inclined to vote for those who are either undecided or refused, in line with how we ask our General Election question. Now that the referendum date has been set, we have also stopped asking our long-term trend question, and are just using the referendum question itself.

If we were to apply the same turnout filter that would have given us the most accurate results in the 2015 general election (combining stated likelihood to vote with how regularly people vote in previous elections), then the lead is much narrower, at 2 points (remain is on 48%, leave 46%). However it is important to note that turnout at the referendum may be different from turnout at a general election. Estimating turnout is one of the crucial challenges in polling at any election, and for this referendum we have no recent comparable precedents to help us. The campaign may unfold unpredictably. So we will continue testing different methods of estimating turnout during the campaign, and may show figures based on a different range of turnout scenarios in the future. 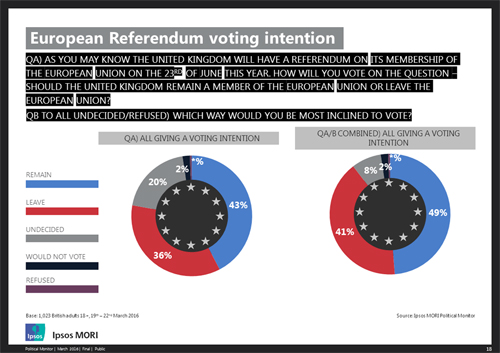 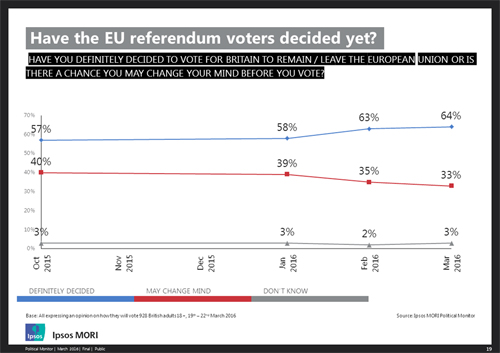 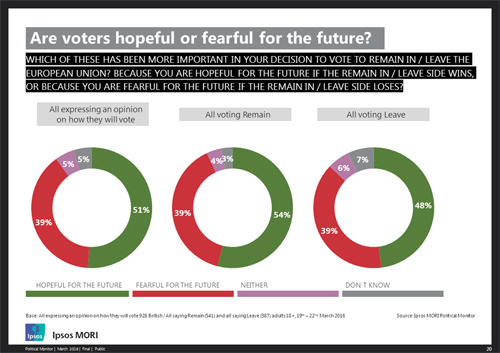 “David Cameron is crucial to the remain side campaign as the most important politician to how people will vote, but the flip side of this is that many Britons think his premiership should end if the country votes for Brexit. Meanwhile, remain keeps a narrow lead over leave, but it gets narrower still when we just look at those who say they are most likely to vote.”

Technical note Ipsos interviewed a representative sample of 1,023 adults aged 18+ across Great Britain. Interviews were conducted by telephone 19-22 March 2016. Data are weighted to match the profile of the population.