A new study of the UK public by King’s College London and Ipsos finds that significant numbers have experienced changes to their sleep patterns since the lockdown was announced on 23 March, with nearly two-thirds (63%) overall saying their sleep has been worse. 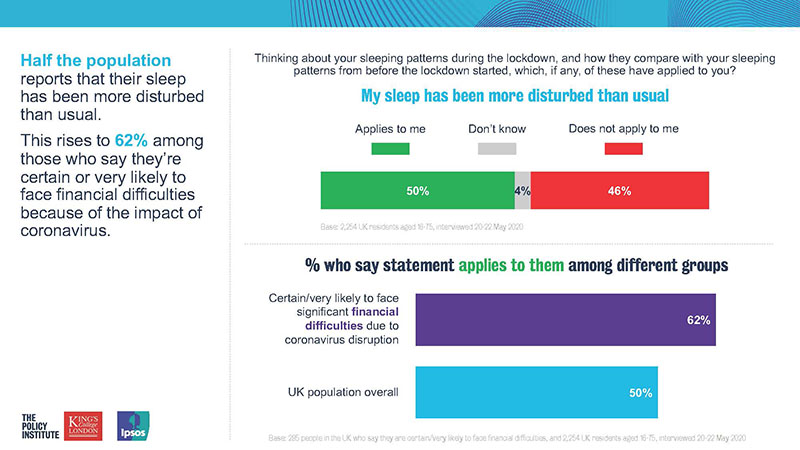 Taking together the proportions who say their sleep has been more disturbed, those who say they’ve slept less a night on average, and those who have slept for longer but felt less rested, nearly two-thirds of the UK (63%) report experiencing worse sleep since the lockdown was announced. 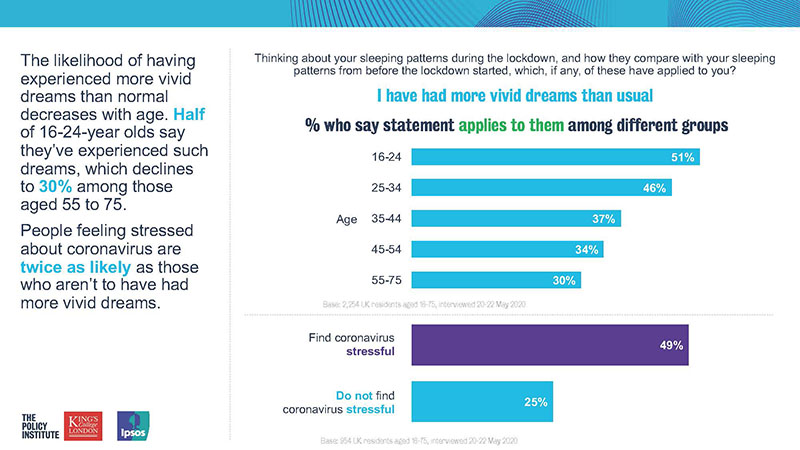 This research is further evidence that the coronavirus crisis is having an impact beyond the immediate physical health and financial effects, and that many people are finding that their wellbeing is suffering even if they haven’t been infected, but are just feeling stressed by it all. Lack of sleep itself may have further knock-on effects on people’s capacity to be resilient in the face of the pandemic, and there are signs that it may be having a disproportionate impact on particular groups: women, younger people, and those facing financial hardship.

Nearly two-thirds of the UK public report some negative impact on their sleep from the COVID-19 crisis, clearly showing just how unsettling the pandemic and lockdown measures have been for a very large proportion us. And this is clearly tied to both how stressful we’ve found the virus itself, and how much we fear the impact of the lockdown on our employment and finances. Young people in particular have experienced the most impact on their sleep, for good and bad – they are more likely than older people to say they’ve experienced negative impacts on their sleep, but also more likely to say they’ve slept better. As with so much about COVID-19, the crisis is affecting people very differently depending on their circumstances, and that includes the most fundamental aspects of life, such as sleep.

Adequate and good-quality sleep is important to maintain our physical and mental resilience and disturbed sleep is often caused by stress. But we also know that poor sleep can play a role in increasing our levels of stress, which can create a cycle that’s difficult to break. This is reflected by the findings that this effect was greater for those most vulnerable and those who were more concerned about the pandemic.
The survey also finds that unrefreshing sleep of longer duration, so called hypersomnia, was reported at a high level, especially by younger people. The associations between depressive symptoms and hypersomnia have been known for some time and again there is a complex two-way relationship between the two, which means they can create a self-perpetuating cycle. Finally, it is also important to acknowledge that a quarter of participants reported they were sleeping more and feeling better for it, which highlights that, as a society, we simply do not get the chance to sleep as much as we need, and that this pandemic is allowing some of us to rediscover the importance of sleep.

Ipsos interviewed a sample of 2,254 adults aged 16-75 in the UK using its online i:omnibus between 20 and 22 May 2020. Data has been weighted to the known offline population proportions for age within gender, government office region, working status, social grade and education. All surveys are subject to a range of potential sources of error