With just one week to go until the referendum on Britain’s membership of the European Union Ipsos finds Leave with a six point lead over Remain. When excluding the “don’t knows” and those not registered, and using our standard turnout filter 53% say they will vote for Britain to leave the EU while 47% say they will vote to remain (note we have introduced some methodological changes this month, see technical note for details). 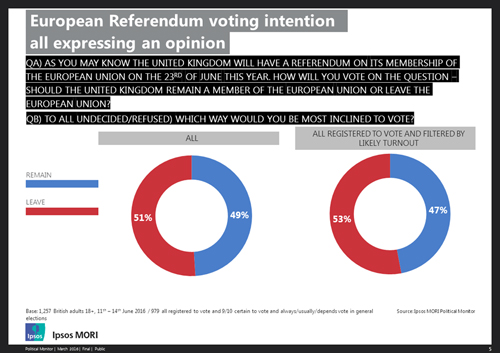 Immigration has now surpassed the economy becoming the most important issue for voters. One in three (33%) mention immigration as one of their most important issues (up from 28% in May) compared with 28% saying the economy (down from 33%). There are striking differences on these two issues when looking at them by voting preference. More than half (52%) of those likely to vote to leave in the referendum mention immigration as an issue compared with 14% of those likely to vote to remain while two in five (41%) Remain voters say the economy is an important issue compared with 18% of Leave voters. Other issues mentioned by voters include Britain’s ability to make its own laws (12%), the impact on public services/housing (11%) and the impact on British jobs (8%). 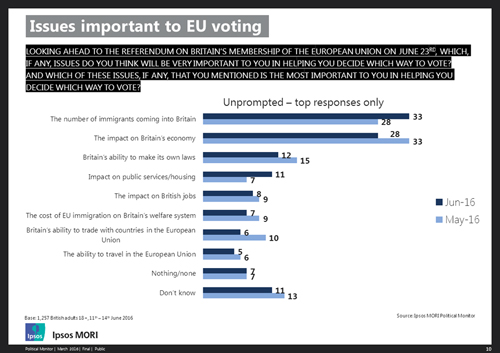 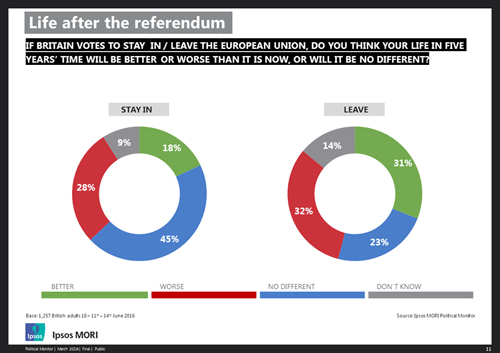 This distrust is also reflected in public attitudes towards a number of claims made about the outcome of a vote for Britain to stay or leave the EU.

If Britain votes to stay in the EU:

If Britain leaves the EU:

Our ongoing vote intention figures show the Conservatives still holding a small lead over Labour. The Conservatives currently stand at 35% compared to Labour with 34%, the Liberal Democrats at 9% and UKIP at 10%. Gideon Skinner, Head of Political Research at Ipsos, said:

“The Leave campaign is getting their messages across, especially on the key public concern on immigration. But the Remain camp is finding it much harder to convince people that their core economic messages, both on the risks of Brexit and the benefits of staying, is going to have a personal impact on their lives. Meanwhile, the public still thinks Remain is more likely to win on June 23rd – but they are much less certain than they were a few months ago.”

Ipsos interviewed a representative sample of 1,257 adults aged 18+ across Great Britain. Interviews were conducted by telephone 11th – 14th June 2016. As announced last week, this month we have introduced some methodological changes, some as a result of internal testing, and some in line with our standard practice in the run-up to an election, including setting educational attainment quotas and weights, and basing voting figures on all registered and with our standard turnout filter. This gives us our figures of 47% remain / 53% leave this month (when excluding don’t knows). When all of these are applied to our May poll for comparison, we would have found 57% remain / 43% leave (compared with 60% remain/40% leave which was published, based on all).

The impact of the registration and turnout filters on the June poll both reduce the remain share, and increase the leave share, by one percentage point each (in other words, each increases leave’s lead by two points). We cannot show the impact of the education attainment change to the June figures, as it has been applied as a quota at the beginning of fieldwork to maximise sample efficiency rather than simply relying on weighting. However we can estimate the effect it would have had in May – and again, that month it would have reduced the remain share by one and increased the leave share by one. See here for more information.