Digital infrastructure in the form of high speed broadband, full fibre networks and 5G is top of Captains of Industry’s infrastructure investment wish list for the country according to a new survey by Ipsos.

The survey of industry leaders finds top priorities for investment are very different to those of the British public; just as they were in 2016.

While the local road network features highly among the public’s wish-list – 40% choose this (putting it in equal second place behind rail infrastructure) – only 11% of Captains think it should be a priority for investment. The gap is larger for digital infrastructure (28% vs 59%) and also large for flood defences (30% vs 9%).

New housing supply, rail and motorways are in both groups’ top four. 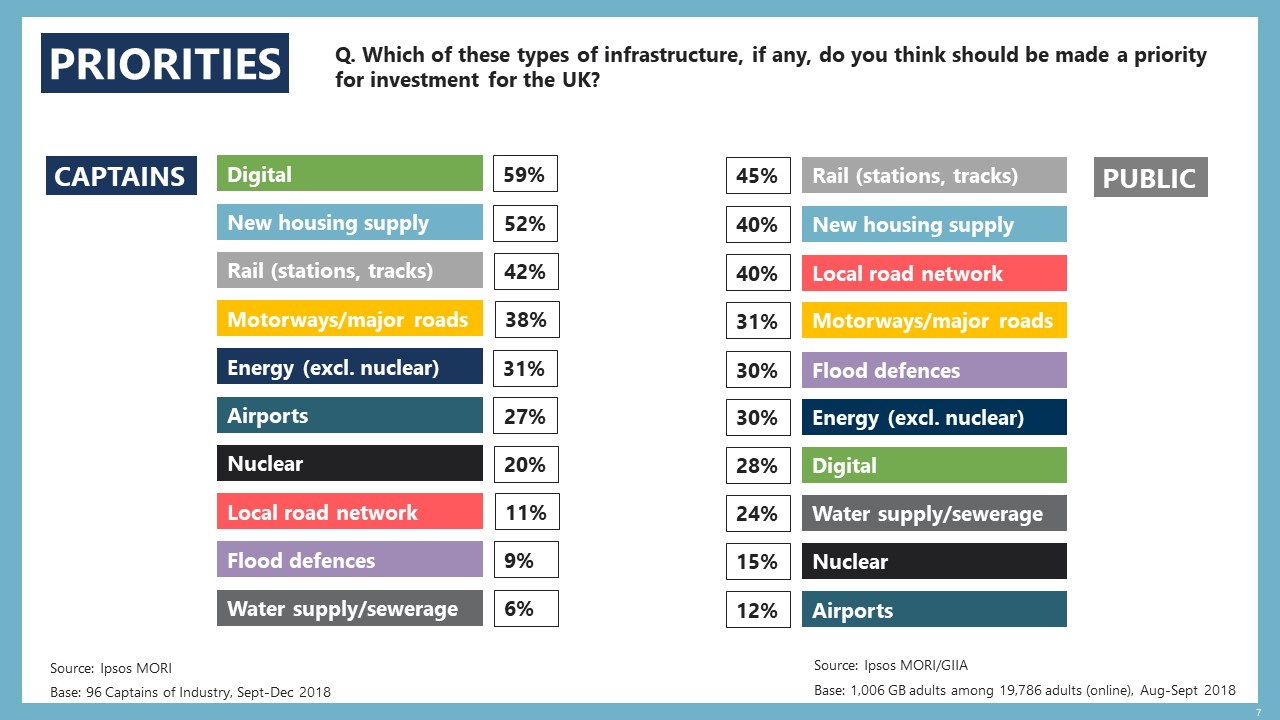 The findings come from the annual survey of FTSE 500 business leaders which follows on from a similar survey of the public undertaken by Ipsos in partnership with the Global Infrastructure Investors Association (GIIA) last year.

Captains put digital top of their priority list, and rate it negatively by 61% to 38%. They are similarly more negative than positive for seven other sectors including electric vehicle charging (covered in the survey for the first time). New housing supply is rated negatively by 82% to 13% of Captains who are most positive about water supply and sewerage (81% to 17%).

Across most sectors, captains are more negative than the public, and are more opinionated and more critical when rating the country’s infrastructure overall. They are dissatisfied rather than satisfied by a margin two to one (58% to 27%). 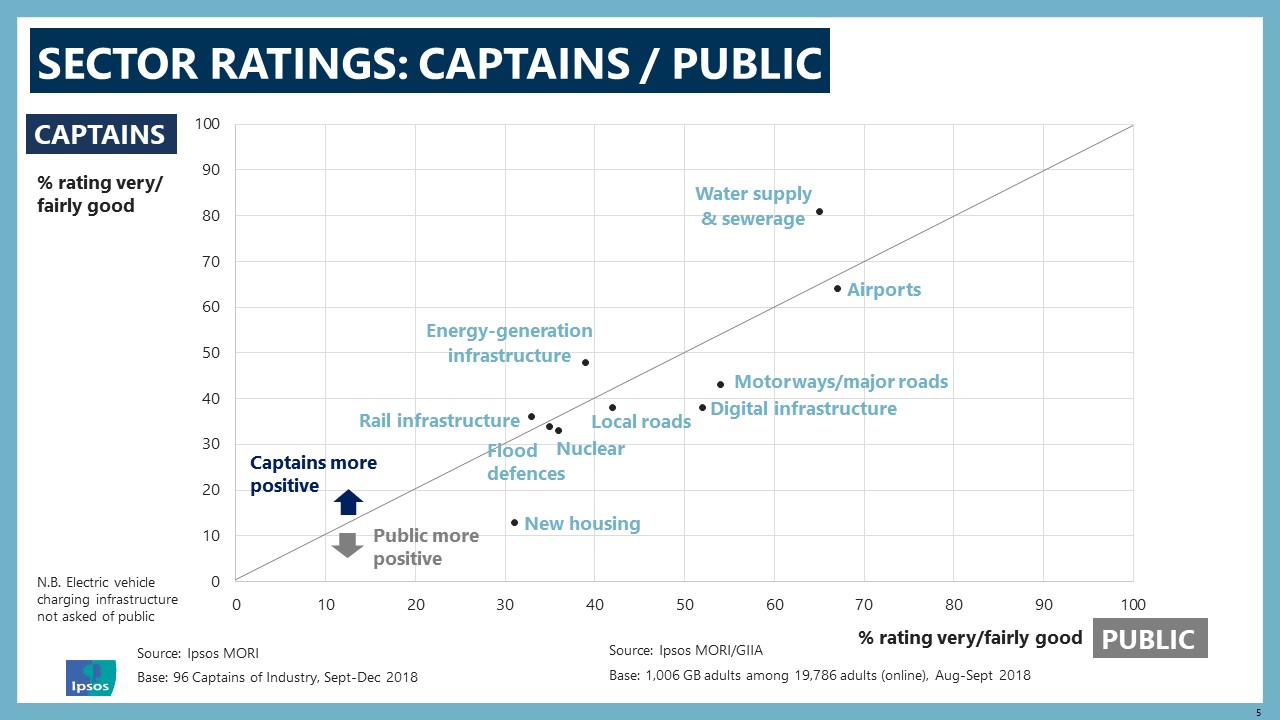 Captains are negative about the country’s digital infrastructure despite being positive about their own company’s broadband speed and reliability.

A majority, 57%, think that that all parts of the UK should have equal access to broadband internet, and 31% disagree. A survey for the National Infrastructure Commission last year found the public more convinced of this by 86% to 4%.

Like the public, Captains cool on the idea of paying more towards their broadband bill for businesses in rural areas having access to the same quality of broadband - 46% disagree - although 42% agree.

More agree than disagree that businesses in rural areas should pay for the higher cost of installation through higher bills although, again, opinion is relatively divided; 49% agree, 40% don’t. 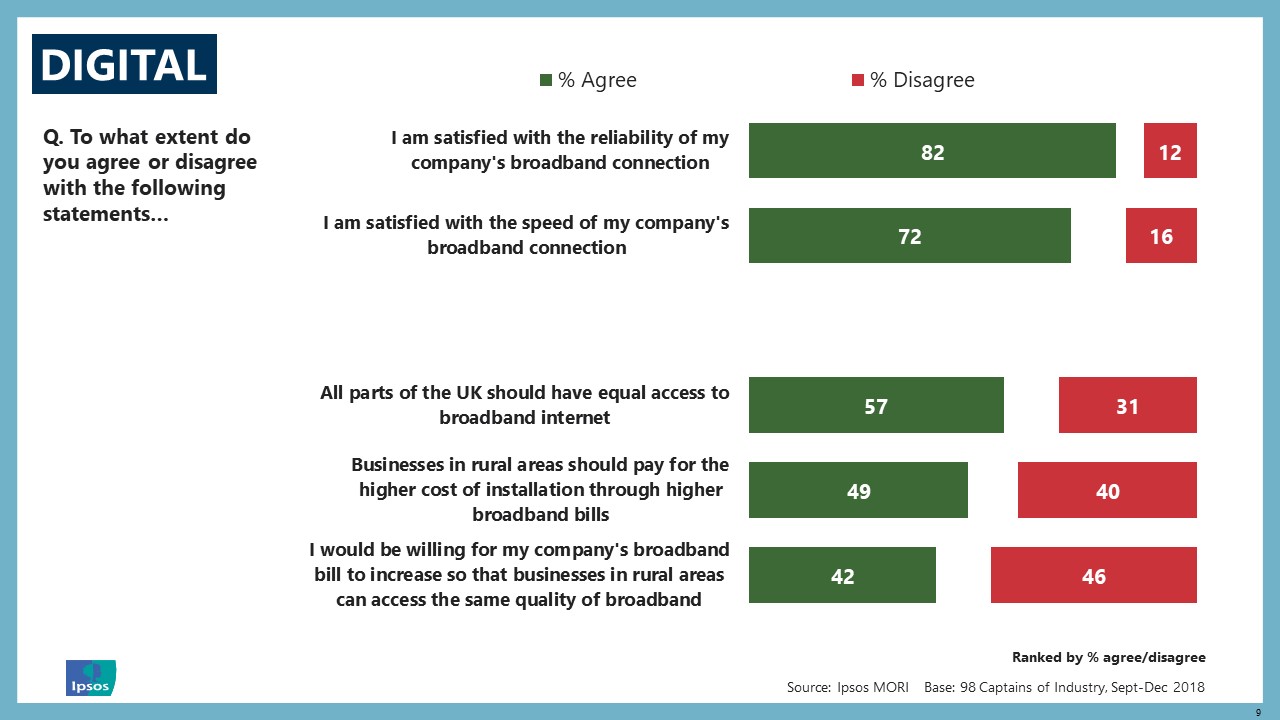 Commenting on the findings, Ben Marshall, Research Director for Transport and Infrastructure at Ipsos, said:

These findings are based on research carried out soon after publication of the National Infrastructure Assessment which included a plan for broadband and full fibre connections. Captains of Industry are not unhappy with their own business’ broadband but prioritise it for national investment.  These national-local perception gap, possibly reflects an appetite to upgrade business-critical infrastructure and remain competitive globally.
There are two ways of looking at the findings on who should pay. On the one hand, there is sizeable resistance among leaders of these large businesses to the notion that everyone should pay to ensure equal access for some rural-based business. On the other, many do say they would pay for others.

Captains of Industry – Ipsos conducted 100 interviews with respondents from the top 500 companies by turnover, and the top 100 by capital employed in the UK. 96 answered questions about infrastructure.

Respondents were Chairmen, Chief Executive Officers, Managing Directors/Chief Operations Officers, Financial Directors, or other executive Board directors. Interviews were primarily carried out face to face (7 were carried out over the telephone) between September and December 2017.

2018 survey of the general public (Ipsos in partnership with the GIIA, November 2018) – further details: