Ipsos’s final 2019 election poll for the Evening Standard indicates that Boris Johnson and the Conservatives are on course to win the 2019 General Election. Our headline estimate of voting intention is Conservative 44%, Labour 33%, Liberal Democrats 12%, Greens 3%, Brexit Party 2%, Others 6%. 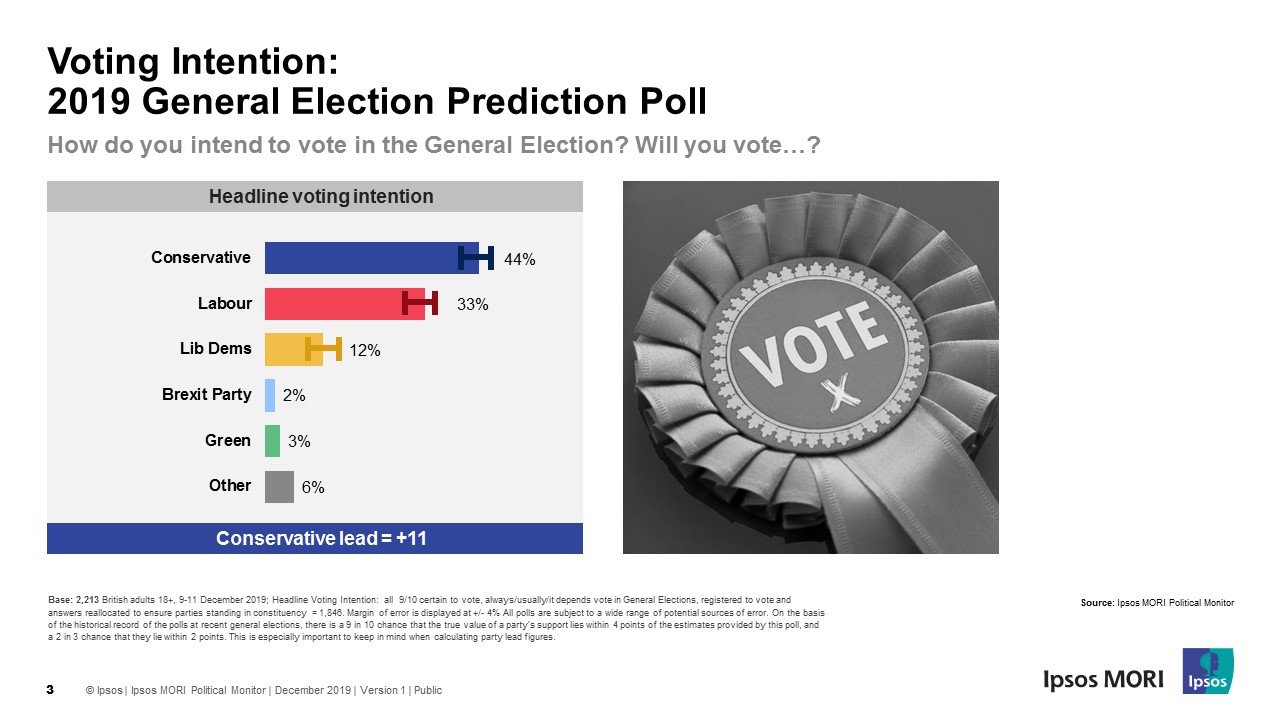 This would be the biggest share of the vote the Conservatives have achieved in a General Election since Margaret Thatcher’s first victory in 1979, and implies an overall majority for the Conservatives in terms of seats is the most likely outcome.  Nevertheless, it is important to bear in mind that all polls are subject to a margin of error, and also that nearly one in four (23%) of voters say they may still change their mind.

Almost one in four (23%) say they might still change their mind before they vote (slightly above the 19% recorded in 2017). This rises to 41% of Liberal Democrat supporters, while Labour supporters are marginally more likely to say they could change their mind than Conservatives (by 25% to 17%).

65% of the general public say it is very important to them who wins the election, the highest on record before an election (first asked by Ipsos in 1987). 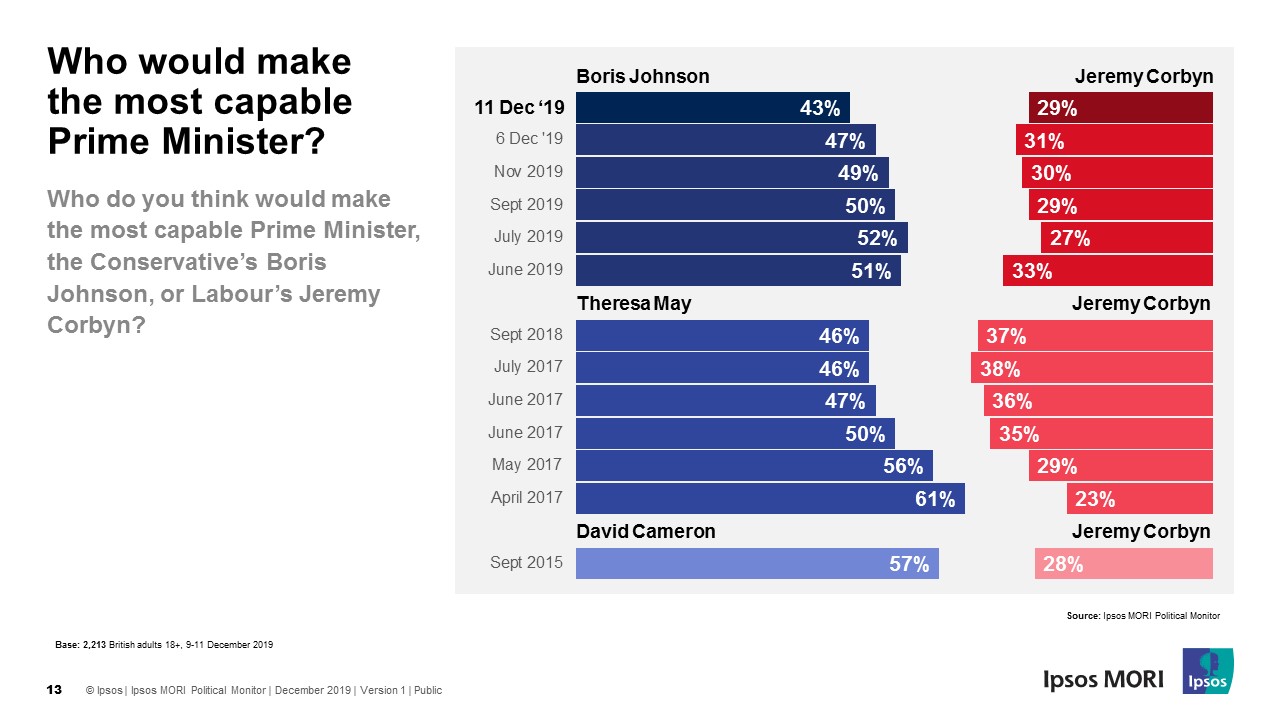 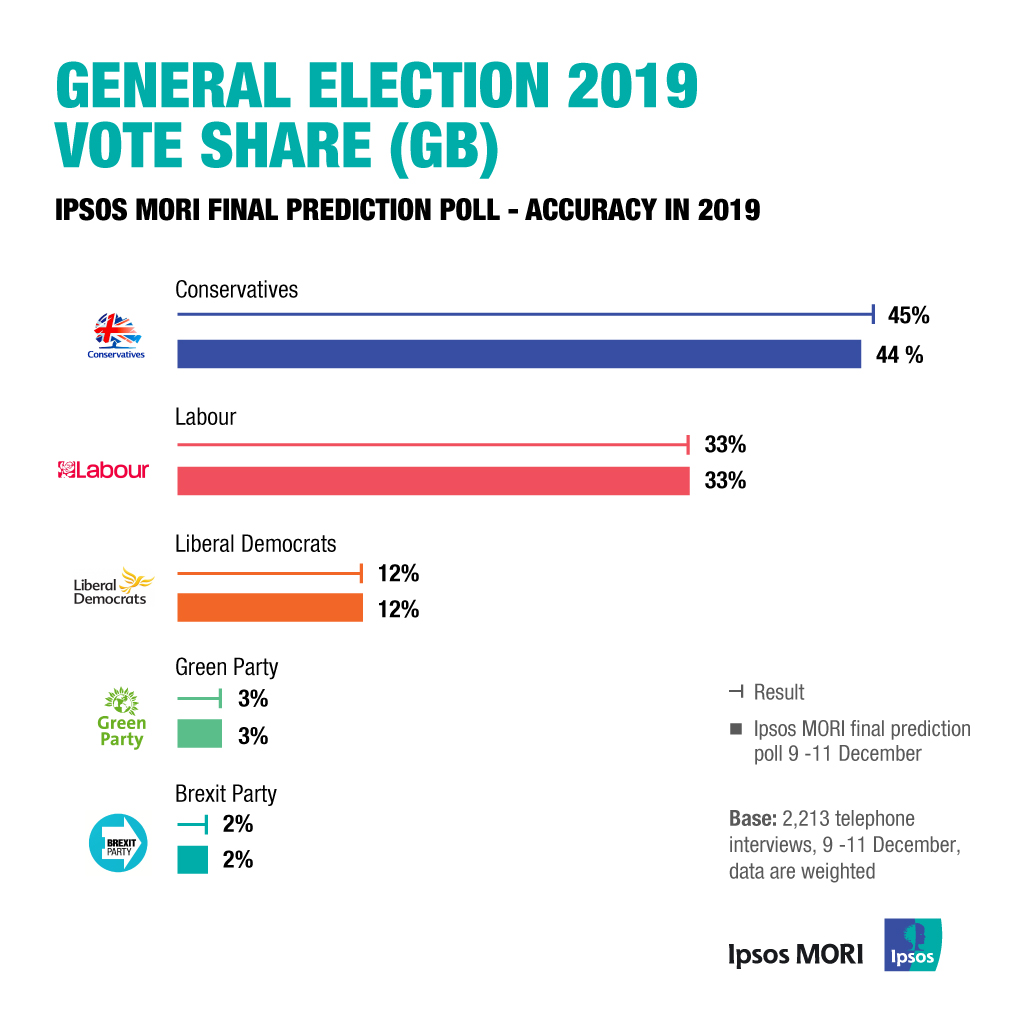 Labour has squeezed the Liberal Democrat vote share over the course of the campaign, but our final poll suggests this has not been enough to prevent the Conservatives scenting victory.  Overall, the Conservatives have managed to keep their vote from 2017 more successfully than Labour, while Boris Johnson retains his lead over Jeremy Corbyn as the most preferred PM.  The country is not unanimous though, with clear splits by age as well as by other groups, and the number of people who said they might still change their mind is slightly higher than in 2017, with potential for more switching between Labour and the Liberal Democrats.  And despite a record number saying the election outcome is very important to them, there are signs that the public is not wholly enthusiastic about the choices they face from either party.

Ipsos interviewed a representative sample of 2,213 adults aged 18+ across Great Britain. Interviews were conducted by telephone on 9 to 11 December 2019.  Data are weighted to the profile of the population.  All polls are subject to a wide range of potential sources of error. On the basis of the historical record of the polls at recent general elections, there is a 9 in 10 chance that the true value of a party’s support lies within 4 points of the estimates provided by this poll, and a 2 in 3 chance that they lie within 2 points.