The Ipsos Veracity Index is the longest-running poll on trust in professions in Britain, having been asked consistently since 1983. The 24th edition records a significant decrease in public trust in the police, for the second year in a row. It also reveals that librarians are one of Britain’s most trusted professions, ranking alongside doctors and nurses. 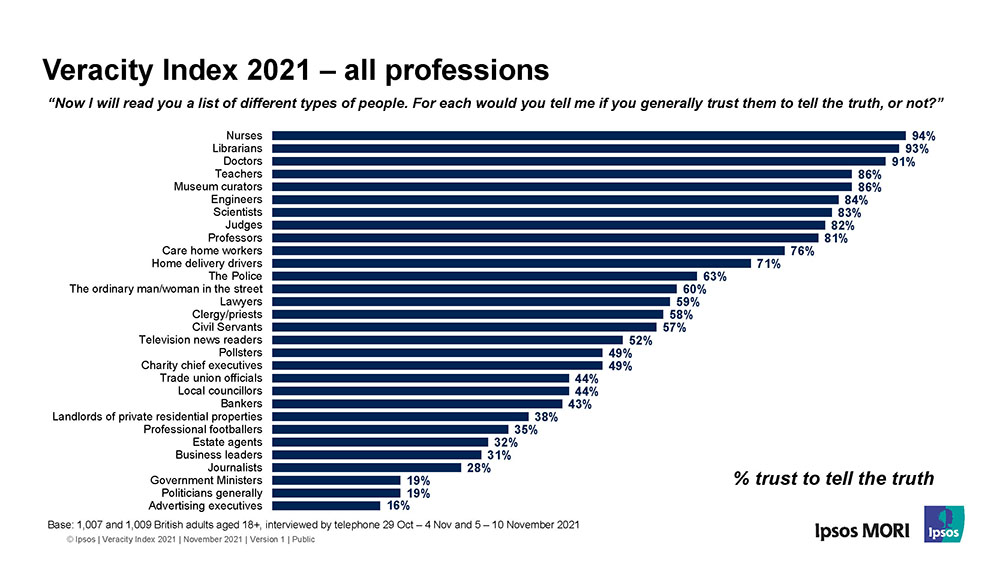 As was the case in 2020, this year’s poll was carried out by telephone rather than face-to-face due to pandemic restrictions, which means that mode effects should be considered when comparing with waves of the survey prior to 2020, especially when changes are near the margin of error.

Trust in professions varies little by gender. The largest gap in trust between men and women exists for politicians, who are trusted to tell the truth by 24% of men and just 15% of women. Women are however slightly more likely than men to say they trust trade union officials (48% versus 40%) and lawyers (63% vs 56%).

There are larger gaps by education, especially between the degree-educated and those with no formal qualifications. The biggest gap exists in trust in civil servants, who are trusted by almost three quarters of degree-holders (72%), thirty percentage points ahead of trust levels among those without qualifications (42%). The next-biggest gaps exist for charity chief executives (59% versus 35%), pollsters (59% versus 38%), engineers (93% and 73%) and trade union officials (54% vs 34%). Bankers are the only profession where this relationship is reversed: 50% of those without qualifications trust bankers, compared with 35% of degree-holders.

This year’s index has a new entrant very near the top of the ranking: more than nine in ten Britons say they trust librarians to tell the truth. It also confirms some movements we started to see last year, most notably the drop in trust in the police, which can be seen among both men and women.
Trust in journalists now equals the highest level we have recorded in the index, although still they are trusted by fewer than three in ten of the British public. Other professions who have seen an increase in public esteem include professional footballers and estate agents.
We have also seen a small increase in trust in politicians – although both are trusted by just one in five Britons. This leaves advertising executives at the foot of the table for 2021, although even with them distrust is not as bad as it was last year.