The latest Ipsos Political Monitor, taken May 11-17th, asks Britons to rate the Conservative and Labour leaders on a range of detailed image attributes. Keir Starmer receives better scores than Boris Johnson on most of the attributes asked about, although Boris Johnson leads on good in a crisis, personality and patriotism. Both leaders mostly see little change or drops since December (although the Prime Minister does improve on two metrics).

In Ipsos’ regular satisfaction ratings there is little change in views towards Boris Johnson and Keir Starmer over the month, but a slight improvement for Ed Davey. Satisfaction with the way the Government is running the country has got slightly worse, but most are still satisfied with the way it is handling the Russian invasion of Ukraine.

When asked to rank Boris Johnson and Keir Starmer on a series of attributes: 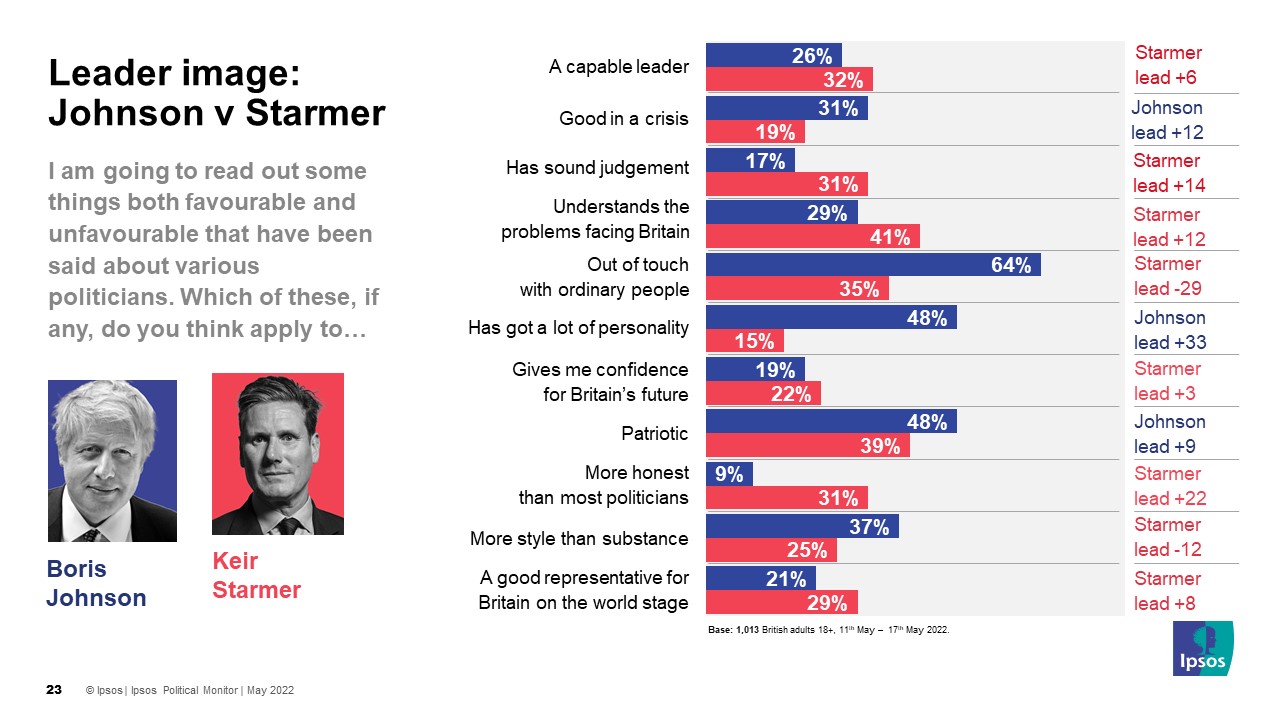 In most cases, both leaders either see little change or falls since December:

In terms of leader satisfaction ratings there is little change for the Conservative and Labour leaders since last month, but a slight improvement for Ed Davey.

Overall satisfaction with the Government has dropped this month back to the levels seen in January, but most still approve of the way it is handling the crisis in Ukraine.

Neither party leader has a very strong image among the public at the moment, as both have satisfaction scores slightly below the average for a Prime Minister and Opposition Leader at this stage. On more detailed leadership attributes, while it is not unusual for a PM to be viewed as out of touch, Boris Johnson’s ratings on key metrics such as being a capable leader, good in a crisis, having sound judgement and understanding Britain’s problems are all lower than we saw for David Cameron and Theresa May, and views on whether he is more honest than most politicians have taken another fall. Keir Starmer, meanwhile, is not really breaking out of the range set by Ed Miliband and Jeremy Corbyn. However, despite that the Labour leader does lead his Conservative opponent on being seen as a capable leader and having sound judgement, which means he has an advantage that they didn’t have.

Ipsos interviewed a representative sample of 1,013 adults aged 18+ across Great Britain. Interviews were conducted by telephone: 11th to 17th May 2022. Data are weighted to match the profile of the population. All polls are subject to a wide range of potential sources of error. On the basis of the historical record of the polls at recent general elections, there is a 9 in 10 chance that the true value of a party’s support lies within 4 points of the estimates provided by this poll, and a 2 in 3 chance that they lie within 2 points. This is especially important to keep in mind when calculating party lead figures.