New research by Ipsos for The Economist shows support for extending certain restrictions to stop the spread of COVID-19 in the short-term while it is still posing a risk, however there is much less support for these measures to remain in place permanently.
A strong majority would like to see face masks continue to be compulsory in shops and on public transport for a certain period after July 19th. Seven in ten (70%) want to see this continue for 1 month after 19th July while two in three (64%) would like it to remain in place until coronavirus is under control worldwide. However this drops to four in 10 (40%) who support face masks being worn in shops and on public transport permanently, regardless of the virus itself, while an equal number (41%) are opposed. 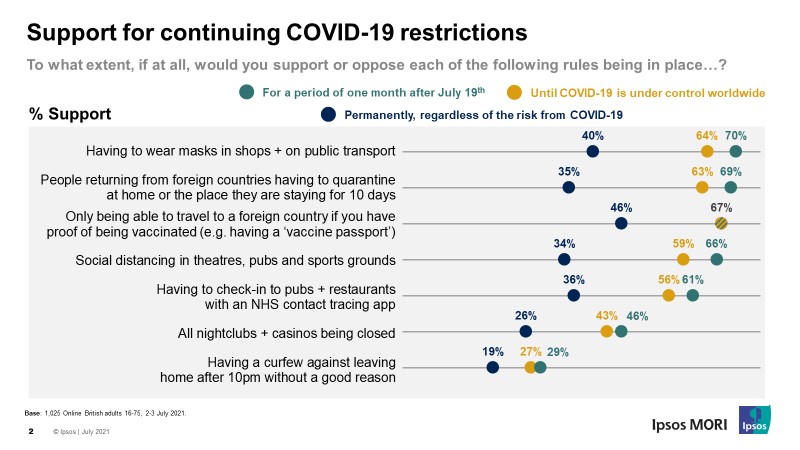 Similar proportions of Britons are in favour of the continued need to quarantine for 10 days after returning from a holiday, 69% say this should remain in place for the month after 19th July while 63% want it to continue until the virus has been taken care of globally. But only a third (35%) would be happy to see it become permanent, while 43% would be against.

Two-thirds (67%) want to proof that you have been vaccinated against COVID-19 (such as vaccine passports) become a necessity for foreign travel for the month after July 19th, the same proportion would be happy to see this in place until the virus is under control globally. Almost half (46%) support this becoming a permanent necessity – the most popular permanent restriction.

A majority of Britons (66%) support social distancing being compulsory in theatres, pubs and sports grounds for the month following 19th July while 6 in 10 (59%) would be happy for it to last the duration of the pandemic globally. This drops to a third who support it remaining in place permanently (34%, 46% opposed).

Similarly, 6 in 10 (61%) want people to keep checking into pubs and restaurants with an NHS contact tracing app for a period up to 1 month after 19th July. Fifty-six per cent support extending this rule until the virus is under control worldwide. However, almost half (46%) oppose this becoming a permanent necessity regardless of the virus, against 34% who are in favour.

Despite widespread support for the continuation of many regulations, some are less popular. Less than half would be supportive of keeping nightclubs and casinos closed, only 46% are in favour of keeping them shut for a further month after 19th July, 43% would keep them closed until the virus is controlled around the world. Only a quarter would shut them permanently, while half (52%) oppose this.

And even fewer are in support of having a curfew against leaving home after 10pm without good reason. Less than a third (29%) would be happy to see this stay in place for the month beyond 19th July, 54% oppose. Just over a quarter (27%) would be happy to see it in place until the pandemic was under control worldwide. Two-thirds (65%) oppose this becoming a permanent regulation, only 1 in 5 (19%) support.

Throughout most of the pandemic, we’ve seen support for many of the measures that the government has taken to control the virus – broadly speaking, many more people define themselves as supporters of the restrictions than opponents,  and only a minority believe that the rules have been too strict.  This latest polling backs this up, with the public prepared to accept a number of restrictions such as mask-wearing and on foreign travel being in place in the short-term after the planned July 19th easing, and even if necessary until the coronavirus is under control worldwide (although support for the most extreme of the options – a curfew – is consistently much lower).
However, this isn’t a blank cheque –  support falls noticeably for restrictions being in place permanently.  Interestingly, while COVID is still seen as a risk support for restrictions tends to be stronger among older age groups, but that age difference disappears when we ask about support for restrictions remaining in place permanently (and if anything, older groups actually become more opposed).